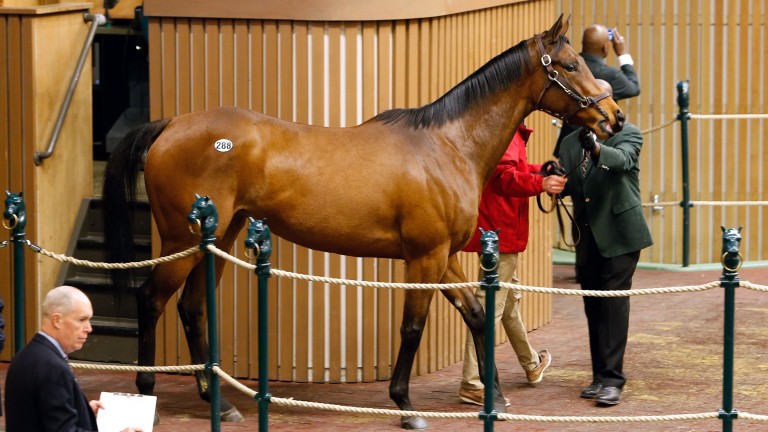 Beautiful, fast, rich and sweet, champion Abel Tasman melted the hearts of potential buyers at the Keeneland January Sale, reaching out to gently nuzzle bystanders and causing jaws to drop when she sashayed past with her eyes bright and tail swinging.

At the end of the opening session on Monday, however, the six-time Grade 1 winner exited the spotlight of her public life for a pastoral future with Coolmore after a sale record-equaling bid of $5 million, leaving only fading memories for those who wanted to possess her or had been connected to her.

“She’s a queen, isn’t she? They’re very rare, animals like her - she had everything. She’d be anybody’s dream filly to own, wouldn’t she?” declared Coolmore’s Dermot Ryan, who manages Ashford Stud near Lexington. “We couldn’t be more thrilled.”

Ryan said a decision would be made quickly by John and MV Magnier and their partners on a 2019 mate for Abel Tasman, and he mentioned Triple Crown winners Justify and American Pharoah, top young sire Uncle Mo and Coolmore standard-bearer Galileo as possibilities.

While Coolmore was exultant, Abel Tasman’s sale was somewhat bittersweet for the partners that raced her, breeder Clearsky Farms and China Horse Club.

“She made me fall in love with her a few times. It will take a long time to find one like her again,” reflected bloodstock agent Mick Flanagan, who engineered the racing partnership and who was present for Abel Tasman’s valiant surge through rain and mud to capture the 2017 Kentucky Oaks in her championship season.

A five-year-old by Quality Road, Abel Tasman was such an outstanding broodmare prospect that Mark Taylor, who oversaw her presentation for the sale by his family’s Taylor Made Sales Agency, said that she is "like a totally different breed of animal".

“She was just so classy through the whole (sale procedure)," he said. "If you just study horses like that, you learn what separates great horses from average horses. Everything she did was just different than other horses - the way she handled the stress, the way she cleaned up her tub at night, the way she came out there and did her job, the way she looks up and kind of analyses what’s going on every time she comes out.

“It’s something intangible,” Taylor said. “There are other horses that probably have the biomechanics she has but they don’t have that X factor that she has.”

Abel Tasman became the third champion American mare bought for seven figures by Coolmore at auction since November 2017, when the Irish-based conglomerate purchased turf star Tepin, by Bernstein, for $8m at Fasig-Tipton and champion dirt mare Stellar Wind, by Curlin, for $6m at Keeneland.

With the trio of champions together costing $19m, Abel Tasman is the relative bargain of the group.

Taylor said he believes that the final price was fair for everyone but suggested Abel Tasman possibly could have brought an even higher figure had she been ready for sale in November, when more buyers tend to be on hand than in January.

“I think Coolmore made a good buy,” Taylor said. “It was a good price for the seller and I thought it was good value for the buyer.

“Maybe you get a little greedy,” he added of his hope the mare would sell for somewhat more. “I just had a lot of respect for Abel Tasman and I think she’s worth every penny of that.

“She’s the kind of mare that could produce a stallion, and you could be sitting here 20 years from now like the case when Coolmore bought (multiple Graded winner) Mariah’s Storm (the Rahy mare who went on to produce Giant’s Causeway and his full brother Freud) from us (for $2.6m), where she’s produced two stallions and the whole legacy.

The bidding on Abel Tasman opened at a cool $3m and slowly moved upward. Coolmore, with Ryan and others affiliated with the stud standing near the back walking ring, apparently joined the fray at $4.5m, Taylor said, and then staved off the last remaining competition at the upper echelon. 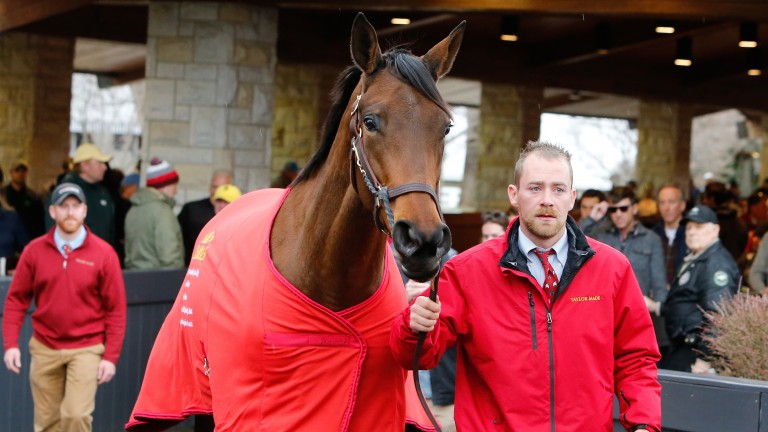 The price was the highest paid at the Keeneland January sale for a broodmare prospect and tied the overall record set in 2000 when Graded winner Mackie, a daughter of Summer Squall and half-sister to Kentucky Derby winner Sea Hero, was sold for $5m to Britton House Stud while in foal to Mr Prospector.

Taylor noted that while the sale was a victory for China Horse Club and the Cleary family’s Clearsky Farms, there were some naturally conflicting sentiments in parting with such an outstanding mare.

“I talked with Mr Teo (Ah Khing) from China Horse Club and I think he was bittersweet because he had an emotional connection with the horse - he loved the horse. But it’s a business and he knew that he had to make that decision,” Taylor said.

“I think for Clearsky, there’s a lot of pride when you breed and raise a horse like that and you campaign them and they win six Grade 1 races. And they’re commercial people also and they sold her for $5m. So, they pretty much ran the whole spectrum of what they’re trying to accomplish, so I think it’s nothing but smiles and high-fives for them. That’s what they’re trying to do,” he added.

As always, there was a huge portion of luck involved in the story of Abel Tasman. While being born, one of her feet perforated the uterus of her dam, the Deputy Minister mare Vargas Girl, and the mare could not be saved.

Raised by a nurse mare, Abel Tasman was not sold at the 2015 Keeneland September Yearling Sale on a final bid of $65,000 after getting less than outstanding marks for scopes of her throat.

But that failure transformed into the ultimate victory for Clearsky, first through sale of half of Abel Tasman to China Horse Club and her subsequent racetrack earnings of $2.79m and then her financial triumph at the January Sale.

On top of the $5m for Abel Tasman, Clearsky also bred the top-selling yearling during the opening session, a $375,000 Into Mischief colt whose third dam is champion and Broodmare of the Year Personal Ensign. That colt, also consigned by Taylor Made, was acquired by Ardfield Bloodstock.

“They do a fantastic job,” Taylor said of Clearsky owners Bernard and Eamonn Cleary, who took home the Eclipse Award as America’s outstanding breeder for 2017 due to the accomplishments of Abel Tasman and fellow champion Arrogate.

“Their dad (the late Irish-born businessman Eamon Cleary) started the operation but they’ve progressed and carried on, and they’ve got a great farm manager and great land. They’re very shrewd about the mares they buy. Hats off to them.”