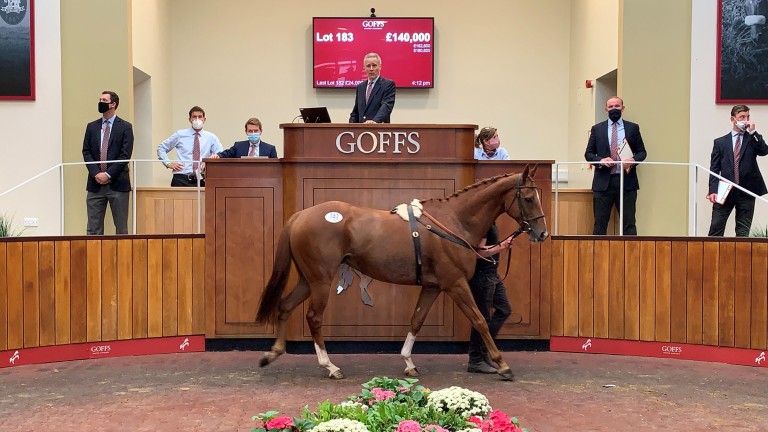 All eyes were on the Trevor Hemmings dispersal at the Goffs UK September Sale in Doncaster on Tuesday, and the draft duly produced the session's top lot when Tom Malone went to £140,000 for the classy hurdler Stoney Mountain.

Ongoing travel restrictions prevented the three-time Grand National-winning owner, who lives on the Isle of Man, attending the auction, but his racing manager Michael Meagher was on hand to oversee the sale of Hemmings' horses.

Meagher said he was "happy but sad at the same time" as he reflected on the day's events, which saw the Hemmings dispersal generate receipts totalling £1,136,200 - 42 per cent of turnover - as 56 lots, all of which were offered without reserve, changed hands for an average of £20,290.

Meagher said: "I've known most of these horses since they were babies so it's been a bit strange, but it's the times we're living in. The horses sold well and there are some lovely horses among them. Hopefully they'll go on and prove that for their new owners.

"There are a lot of nice horses there and I think that's borne out by so many of the trainers buying the horses that were with them back."

Although Hemmings could not be in Doncaster for the dispersal, Meagher reported that the owner had been in regular contact throughout the day and had followed the action via Goffs UK's live stream.

"He left us alone while the lots were selling but he was watching online and he's been on the phone since," said Meagher. "He's a bit like myself, happy but sad at the same time. 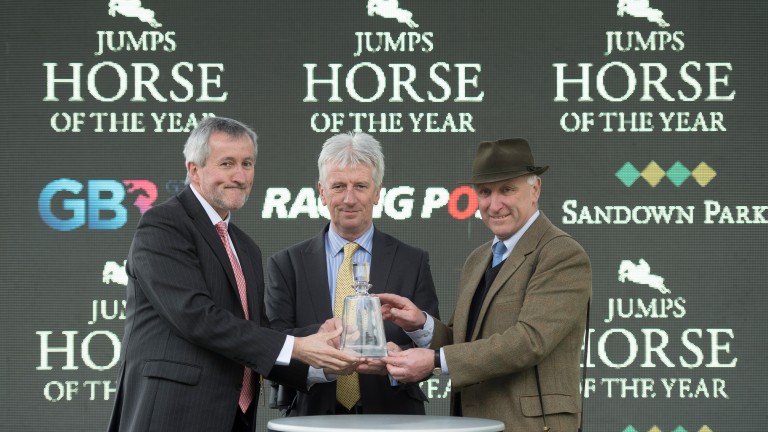 "It's strange selling all those horses by Cloudings thinking there could be another Many Clouds among them. There were horses selling today for £10,000 and £12,000, but Many Clouds only cost €6,000 himself, so who knows?"

Although the sale saw Hemmings reduce his horses-in-training numbers by around two-thirds, Meagher said that the instantly recognisable colours of emerald green and yellow quarters, white sleeves and cap would still be a fixture on the racecourse.

He said: "We have 25 in training and there are a few youngsters knocking around, what's going to happen with them is yet to be decided. We're in changing times so who knows. It's a shame that he's restricted to where he is and can't enjoy the ones he has left. Hopefully that'll change soon."

Hemmings announced his intention to cut back his string last month, citing the impact of the coronavirus pandemic, both personally and professionally, as a driving factor in his shock decision.

Top lot Stoney Mountain boasted a compelling profile as a high-class hurdler with the potential of a chasing career still ahead of him, and Malone confirmed that is where the Grade 3-winning son of Mountain High's future lies as he joins the yard of Cheltenham Festival-winning trainer Jamie Snowden.

"The form is in the book," said Malone. "He's a Grade 3-winning and Grade 2-placed runner who's been bought to go novice chasing. He's the right age for that game as he's seven rising eight and he's just a lovely horse to go Saturday racing with.

"If he jumps a fence, or even improves for it, he's going to have other big days ahead of him. And in the grand scheme, for a horse rated 142 I think that price is value.

"It's unfortunate for Mr Hemmings that he's having a dispersal sale but that's where we're at. He's been bought for a new client of Jamie Snowden's." 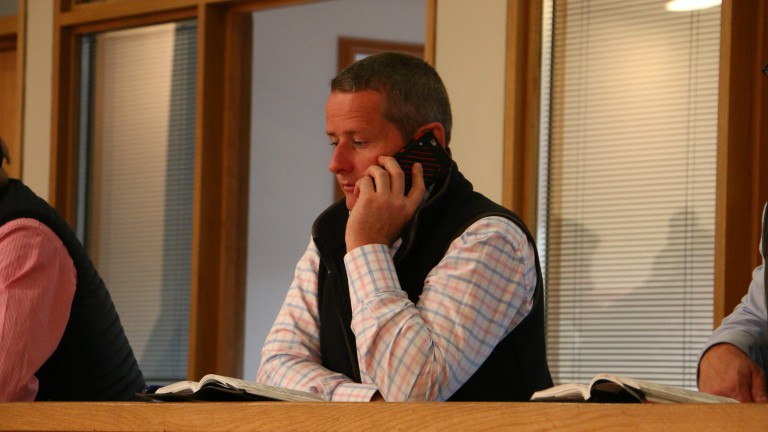 Stoney Mountain, who won six races for Henry Daly, was bred by Hemmings' Gleadhill House Stud from Cherry Pie, a Dolpour half-sister to the Grade 2-winning chaser The Nightingale.

The Hemmings lots included four of the top ten prices, as the high-class Burbank went the way of Jimmy Moffatt at £62,000 and Simon West gave £52,000 for the smart Touch Kick.

Kerry Lee also dipped into the Hemmings dispersal when she went to £50,000 for the lightly raced Ballybegg.

The five-year-old son of Mahler ran seven times in Irish point-to-points prior to joining Hemmings and Warren Greatrex after a £52,000 transfer at the Tattersalls Cheltenham December Sale, after which he finished third in a Doncaster bumper.

"He was my pick of the sale," said Lee. "He's a real quality, well-made gelding, I thought I'd have to go to a lot more to buy him actually. I stood there thinking I wasn't going to have enough! I certainly hope he proves to be good value.

"He's not jumped anything under rules yet, but he's run in his point-to-points and we'll get him schooled up and then go novice hurdling with him. He's been bought for an existing client in the yard."

The Hemmings lots were not the only headline offering at the September Sale, with Gigginstown House Stud also holding its annual dispersal. In total, 17 Gigginstown lots sold for £429,200, headed by the £70,000 Aidan O'Ryan and Gordon Elliott gave to take the classy Petit Mouchoir back to the trainer's Cullentra House Stables.

The nine-year-old, who began his career with Elliott before switching to Willie Mullins and then Henry de Bromhead, has won five of his 29 starts under rules, and was last seen finishing third to Aramon in the Galway Hurdle.

"He's getting on a bit but it's not long ago he ran a savage race in the Galway Hurdle," said O'Ryan. "He's been bought for an existing owner who's looking for some nice days out. He'll probably go for the Morgiana and those sorts of races, and if he stays sound I'm sure he'll pick up plenty of cheques and the owner will get his money back.

"We had him as a four-year-old and won the Land Rover Bumper with him so it's nice to have him back. There seems to be plenty of zest left in him."

Petit Mouchoir was making his second appearance at public auction, having been bought by Mullins and Harold Kirk for €100,000 in 2014.

O'Ryan said of trade: "There's been strong trade all day, which has been great to see. All the sales companies deserve a lot of credit at the moment as they're jumping through a lot of hoops to get these sales on and I'm just pleased their effort is being rewarded."

Nicky Henderson and David Minton also made a purchase from the Gigginstown draft as the champion trainer went to £65,000 for Mengli Khan, who brought a sizeable update to the sale having registered a 26-length victory at Ballinrobe this month.

"He's a talented horse," said Henderson, who could not reveal the name of his client but added: "He's been bought for a lovely owner who already has a couple of young horses with me.

"He's bought three stores this year but we thought we could go and have some fun with this horse while we wait for the youngsters to come through. He's very highly rated and looks like a lovely individual."

Mengli Khan, a seven-year-old son of Lope De Vega, joins his third yard, having started out on the Flat with Hugo Palmer, for whom he won two races. Mags O'Toole and Elliott purchased Mengli Khan for 155,000gns at the Tattersalls Autumn Horses in Training Sale in 2016 before he carried the Gigginstown silks to six victories over obstacles

David Crosse on the mark

Jockey David Crosse also made a purchase from among the Hemmings lots when he went to £40,000 for the five-year-old Riggs, who was offered through Dan Skelton's Lodge Hill Stables.

"He's been bought for Noel Fehily Racing," said Crosse, who not only holds a National Hunt licence but is also the syndicate's ambassador. The popular rider revealed that the homework he and Fehily had put in ahead of the sale extended as far as getting the leg up on Riggs in the days leading up to the sale.

"Myself and Noel sat on him ourselves at Dan Skelton's a week ago," he said. "Being in a position to ride these horses is the key to our business so we can get a feel before we buy them. We both loved this fella as soon as we sat on him."

Riggs was making his third appearance at public auction, having been pinhooked by Rathmore Stud for €12,500 as a foal before Highflyer Bloodstock gave €20,000 for the son of Mahler at the Goffs Land Rover Sale.

He has run three times for Skelton and was last seen finishing a keeping-on second in a Market Rasen maiden hurdle. Crosse continued: "He's the type we look for; he's had three runs so he's a readymade horse. He'll probably run in a week's time and will jump fences in time too.

"We generally look for horses who can win over hurdles and then progress over fences in year two so he looks like the perfect type. Considering we only bought our first horse this time last year, we're up to 13 now. Shares are available!"

Since setting up Noel Fehily Racing a little over a year ago, the syndicate have enjoyed success with the likes of Pride Of Lecale, Goodbye Dancer and Shall We Go Now all having crossed the winning line in front.

Skelton also supplied the syndicate with a winner thanks to I'd Better Go Now, and is set to continue to train their newest recruit.

"The horse will stay with Dan, he'll be our second with him," said Crosse. "Dan has a 100 per cent strike-rate for us so far, he could mess that up next week, but we've had one runner and one winner together so far. He's helped us a lot with buying horses and he recommended this fella very highly."

A lengthy session of selling saw brisk trade from start to finish, as 221 of 243 lots sold for a rock-solid clearance rate of 91 per cent.

The figures compare directly with the horses-in-training session of the September Sale in 2019, against which turnover rose by 31 per cent to £2,731,200. The Hemmings dispersal lots contributed 42 per cent of the aggregate, while the Gigginstown dispersal receipts accounted for 16 per cent. 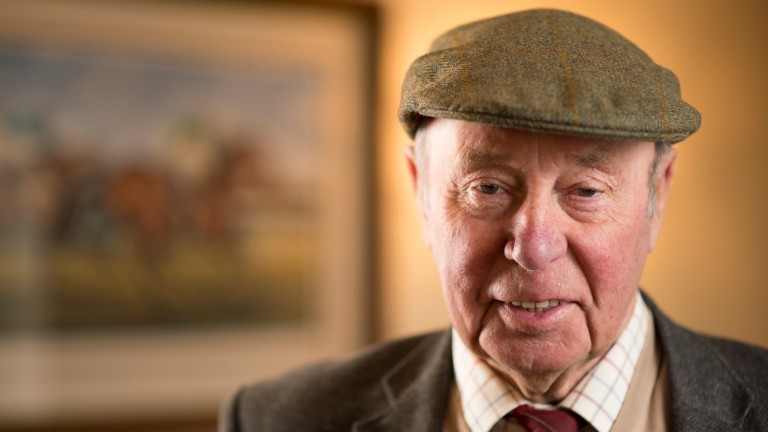 Trevor Hemmings: Gleadhill House Stud dispersal accounted for 42 per cent of September Sale turnover
Edward Whitaker
Goffs UK’s managing director Tim Kent said of trade: "Today has been a big success and it’s great to finish with a clearance rate of 91 per cent, which demonstrates the huge demand for horses-in-training. The two dispersals added a great depth to the sale and we are extremely grateful to both Trevor Hemmings and Gigginstown House Stud for giving us the opportunity to sell these high class horses.

"It has been a pleasure to offer some very exciting horses for Trevor Hemmings and his colours, which will still be seen on National Hunt tracks for some time to come, will leave a lasting legacy in National Hunt racing. The Gigginstown dispersal has become an annual highlight at this sale and we look forward to seeing these horses run for new connections this season.

"We have also welcomed large drafts from the likes of Godolphin and Gordon Elliott and we wish to extend our thanks to all our vendors and buyers – without them we are nothing. We now turn our attention to the Goffs Sportsman's and Orby Sales and we look forward to seeing the next Lucky Vega, Galileo Chrome or Cadillac in Doncaster from next Thursday."

FIRST PUBLISHED 8:43PM, SEP 15 2020
It's strange selling all those horses by Cloudings thinking there could be another Many Clouds among them

Half-siblings to Group winners the standouts for the SGA Yearling Sale Racing In Dubai September Sale comes under orders with sizeable Godolphin draft 'I think it's very tough to buy a good horse' - Keeneland Book 2 ends on a high 'He was immersed in this business' - American consignor Mike Recio dies aged 46 'If you have a horse that ticks every box, this is what you have to pay' No fireworks but a light shone on the sport's unsung heroes