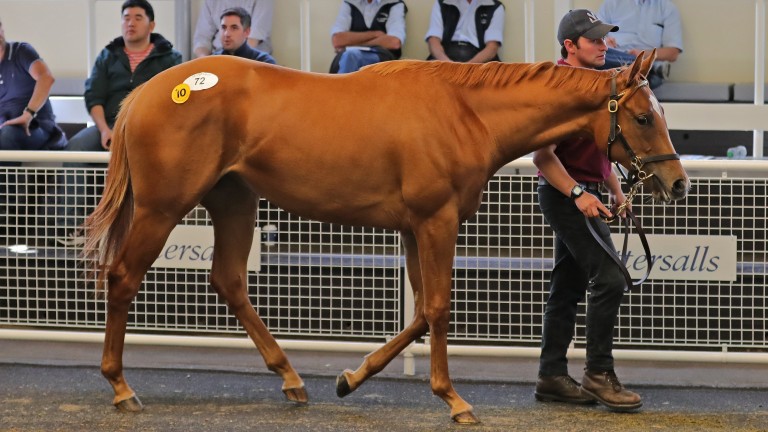 The sale-topping Showcasing filly who will race in the pale blue silks of Middleham Park Racing
Debbie Burt / Tattersalls
1 of 1
By Ollie O'Donoghue UPDATED 7:25AM, SEP 11 2019

A new auction record was set at the third Tattersalls Ascot Yearling Sale on Tuesday when Aidan 'Mouse' O'Ryan and Tom Palin of Middleham Park Racing joined forces to secure an April-born Showcasing filly for £50,000.

Bred and offered by Whitsbury Manor Stud, the athletic sale-topper is a half-sister to the smart Moraawed, a dual winner for Shadwell and Roger Varian, and out of the Sakhee's Secret mare Hot Secret, a winning half-sister to Mill Reef Stakes scorer Temple Meads.

"She has a great step and a fantastic walk, with plenty of size and scope," said Palin. "Showcasing needs no introduction - she resembles her damsire Sakhee's Secret a bit, but her sire was the main draw."

Among the sale graduates to have raced for Middleham Park is Ventura Rebel, a son of Pastoral Pursuits who won his first two races in the pale blue silks before changing ownership to Abdullah Menahi, for whom he finished second to A'Ali in this year's Group 2 Norfolk Stakes at Royal Ascot.

"The Ascot Yearling Sale is very much a sale on the up and has been very kind to us," said Palin. "We always target this sale and the Showcasing filly was a standout for us. We'd be delighted if she could follow in the footsteps of Ventura Rebel." 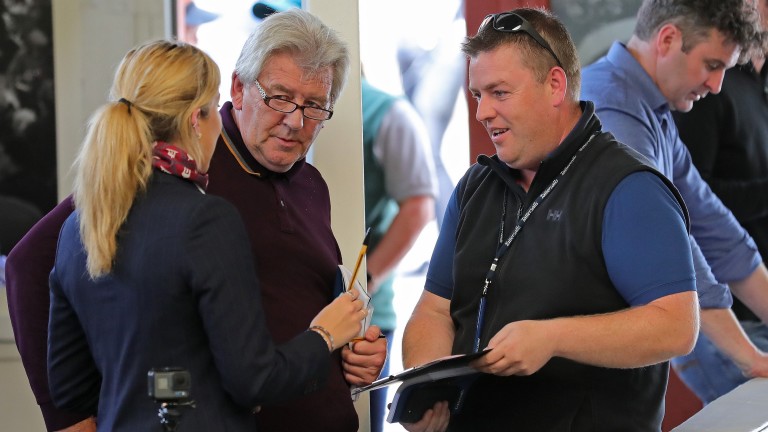 Palin also signed for a Lethal Force colt out of Kenyan Cat on behalf of Middleham Park for £35,000 and described the April-born youngster as "the nicest grey in the catalogue".

Palin added: "He's got a nice active pedigree and has a great walk to him. He'll go into training with Mark Johnston."

The colt was offered by Richard Kent's Mickley Stud on behalf of breeder David Botterill of Hall Farm Stud, who is on the mend following an accident with a mare during the summer which landed him in A&E.

Botterill, who was in attendance at Ascot, was quick to heap praise on Kent for stepping in to look after his yearling crop at short notice.

The sale of a Mehmas filly to Henry Candy for £45,000 represented a decent pinhooking touch for Vikki Hancock of Clonmult Farm in County Cork.

The March-foaled filly, who was acquired in a €8,000 private sale at last year's Goffs November Sale, is a half-sister to Acomb Stakes scorer Treaty Of Paris, and was taking her third turn through a sales ring having been led out unsold for €7,500 at this year's Goffs February Sale.

Candy, who produced Treaty Of Paris to win at York, snapped up this filly on behalf of Alizeti chief executive Alex Frost, who was also involved in the One Too Many Partners syndicate who campaigned the son of Haatef.

"She reminds me of Treaty Of Paris in the way she walks," noted Candy, who also trained the dual Group 1 sprint winner and second-crop sire Twilight Son. "She's a fraction weak behind but she'll strengthen up." 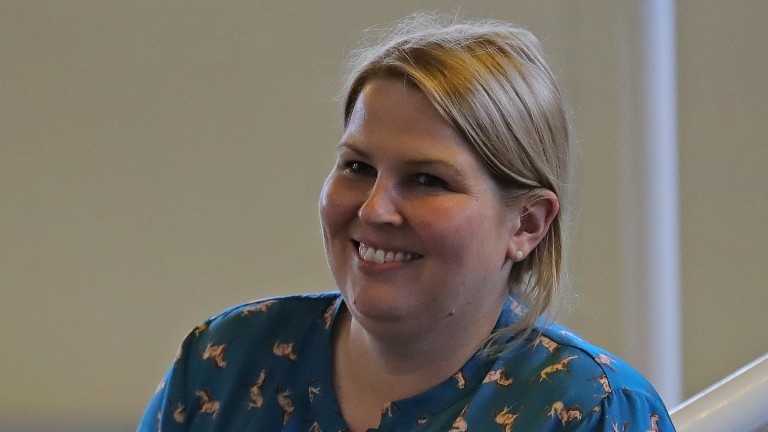 Doyle on the double

Tuesday's session got off to a lively start with Ross Doyle, standing in the bidders' area opposite the rostrum, signing for a filly and colt for a combined £77,000.

First into the ring was a March-foaled filly by Starpangledbanner offered by agent Jamie Railton, with auctioneer Ollie Fowlston pointing to the success of the sire's progeny at Royal Ascot, having landed the 2010 Golden Jubilee Stakes during his own illustrious career.

Queen Mary heroine Anthem Alexander and Coventry Stakes scorer The Wow Signal are among his offspring to have shone at the royal meeting.

"She was a nice physical and a good mover," noted Doyle, who signed the docket at £40,000. "Starspangledbanner is a very good sire of fillies, and we've been lucky at this sale before with the likes of Urban Icon and Wedding Date."

Doyle signed for the Greenham Stakes third Urban Icon for £23,000 from Willie Carson's Minster Stud in 2017, while Class 2 handicap scorer Wedding Date was a £24,000 acquisition from David Hodge's Llety Farms the same year.

The very next lot into the ring was a Footstepsinthesand colt from the family of dual Oaks heroine Diminuendo consigned by Hegarty Bloodstock, with Doyle going to £37,000 to secure the April-born youngster.

"He was also a very good physical, a lovely horse and a good mover," said Doyle. "He looked like he'd been very well prepped and we've been lucky with the sire before, with the likes of Larchmont Lad, Mums Tipple and Threat."

Mums Tipple posted a Racing Post Rating of 119 when routing the field to win this year's Goffs UK Premier Yearling Stakes at York, while Threat achieved a mark of 112 when landing the Group 2 Gimcrack Stakes a day later.

All about the girls

The Ascot sales ring was set alight early in the session when ITV Racing presenter Francesca Cumani and her close friend Alison Jackson parted with a Cable Bay filly they bred for £32,000.

Offered by Violet Hesketh and Mimi Wadham of WH Bloodstock, the April-foaled yearling was described by auctioneer Matt Hall as "a quality, racey two-year-old", with Billy Jackson Stops and Michael Bell the successful bidders from their position near the holding ring.

"We're very pleased - we're both going to keep a leg in her," said Alison Jackson, who was joined by Cumani's mother Sara. "She's a speedy type and she'll race as a two-year-old. We want to share in some of the glory!"

Bell - who signed for the filly at £32,000 - has trained two winners by Cable Bay in Modern British Art and Otago, with Jackson joking that the trainer's latest purchase will hopefully bring up the hat-trick.

The filly is the first foal out of the young Pivotal mare Blondikova, an unraced daughter of Listed winner Cosmodrome, and she also has a Havana Gold filly foal.

Cable Bay, meanwhile, has done remarkably well with his first juveniles, with 16 winners to his name led by Molecomb Stakes scorer Liberty Beach.

Of the 160 lots on offer, 127 changed hands, which resulted in a healthy 79 per cent clearance rate.

Matthew Prior, head of Ascot Sales, said: "The Ascot Yearling Sale has enjoyed a hugely successful year on the track, with two-year-old graduates such as Weatherbys Super Sprint winner Bettys Hope and the four black-type winners flying the flag for the quality that can be found at the Tattersalls Ascot Sales.

"We were cautiously optimistic coming into today's sale having produced an improved catalogue, and an increased buying bench has led to strong demand for those popular lots.

"As ever we must thank both vendors and purchasers alike for their growing support of this upwardly mobile sale, which has firmly established its position in the calendar. 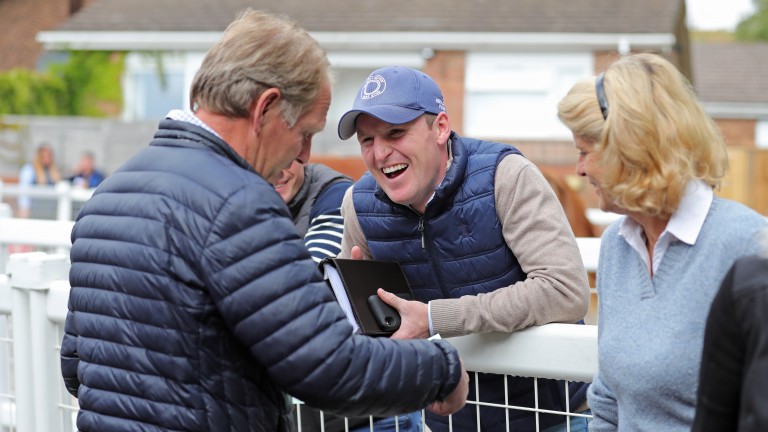 FIRST PUBLISHED 6:31PM, SEP 10 2019
The Ascot Yearling Sale is very much a sale on the up and has been very kind to us, with the likes of Ventura Rebel and Wedding Date

'Gordon thinks a lot of him' - high-flying Wingmen brings £250,000 at Cheltenham The whole episode was a bizarre ending to an otherwise routine sales shift Death of long-serving Keeneland bid spotter Pete McCormick at 75 Global Campaign yearling colt concludes steady OBS Winter Sale 'He could prove to be cheap' - Rockstown Native brings £82,000 at Goffs UK Next generation begin their education on the Irish National Stud course