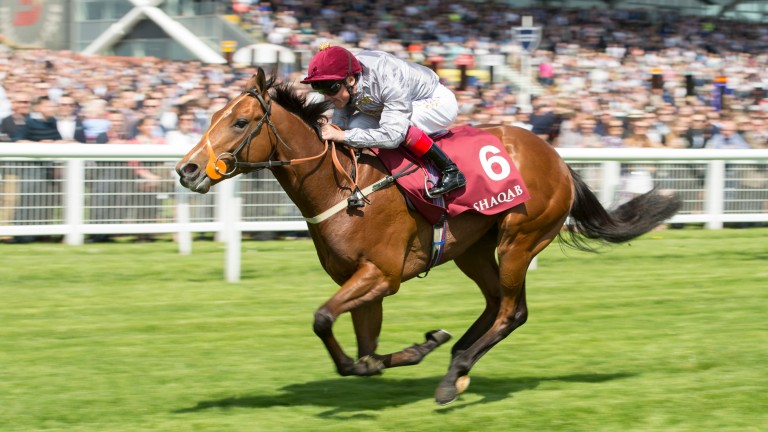 RaceBets have installed Mehmas as 7-2 favourite to supply more individual winners than any other first-season sire in Britain and Ireland before the end of the turf Flat season in November.

Mehmas certainly has all the qualities to be a prolific source of two-year-old talent. By a former leading freshman sire in Acclamation, he was a high-class juvenile himself, winning the July Stakes and Richmond Stakes and finishing placed in the Coventry, National and Middle Park Stakes.

He has been well supported at Tally-Ho Stud – which has launched the careers of four recent previous leaders in this division in Society Rock, Sir Prancealot, Zebedee and Red Clubs – and consequently his debut crop of 146 is the largest among his peers.

Kildangan Stud-based Belardo, a champion two-year-old by the increasingly influential Lope De Vega, is next in the market at 5-1. He has 92 juveniles to go to war with this year.

Territories, runner-up in the Prix Jean-Luc Lagardere at two and successful in the Prix Jean Prat at three, has 110 debut offspring and is 7-1 third favourite to field most winners up to November. The Dalham Hall Stud resident is by Invincible Spirit, who once held the record for number of first-crop winners.

Coventry Stakes winner and Middle Park runner-up Buratino, whose 88 first-crop two-year-olds were conceived at Kildangan at a bargain fee of €5,000, is 8-1.

It is a somewhat unusual year for first-season sires as the highest profile and most expensive new recruit to the European stallion ranks in 2017, Shalaa, retired to Haras de Bouquetot in France.

Shalaa may have fewer runners on this side of the Channel but is quoted at 8-1 in RaceBets' market to become the first of this year's freshmen to deliver a Classic winner in Britain, Ireland or France.

Territories is 5-1 favourite in that market, with Belardo and The Gurkha available at 6-1.

Awtaad and New Bay, bigger prices to lead the way by number of winners, are shorter to get the first Classic scorer, both pitched at 7-1. Dual Derby hero Harzand is rated a 9-1 chance.

Three freshman sires have runners in the first two-year-old race in Britain and Ireland of 2020 at Naas on Monday: Buratino with The Blue Panther, Markaz with Marketta and Prince Of Lir with Boasting.

Joseph Burke of RaceBets said: "It’s a long process each year when it comes to compiling the odds but, between us all, we tend to see a fair amount of individuals at the yearling sales from Deauville onward and then form an early opinion by October.

“Then we run the numbers. Obviously the more representatives a stallion has, the better chance he will sire more winners. Factors such as yearling prices and who the two-year-olds are in training with are all important.

“The one thing we have learned to ignore are the whispers that abound each year. We simply deal in facts and figures."

Last year's leading first-season sire in Britain and Ireland by number of winners in the space of the turf season, Gutaifan, was the 7-2 second favourite behind Muhaarar in RaceBets' opening show.

The bookmaker has kindly provided three £50 charity bets for the Racing Post bloodstock team to pit their wits against the market. Last year Martin Stevens successfully selected Gutaifan, so Racing Welfare will receive £225.

Pedigree, performance, connections and crop size – Mehmas ticks every box and looks a worthy favourite. In fact, with 16 more two-year-olds than the next best represented, Vadamos, and 24 to 25 more than Pride Of Dubai and Twilight Son, he might be said to be generously priced.

A dual Group 1-winning miler at three, The Gurkha has plenty of ammunition on his side with 117 juveniles on the ground, and given they came from a book of mares comprising 28 per cent stakes performers, there is quality as well as quantity. His price may well be an overreaction to the fact he did not run at two, which was due to colic surgery, but he was certainly bred to be precocious, being by Galileo and out of the Group 3-winning two-year-old Chintz.

I've heard good things about Belardo but at the price I'll plump for Territories. He has some very nice stock, he's by the right sire in Invincible Spirit and he hails from one of the best stallion-producing families.

Win only, others on request

First to sire a Classic winner
In Britain, Ireland or France

Win Only, others on request

FIRST PUBLISHED 7:35PM, MAR 29 2020
Factors such as yearling prices and who the two-year-olds are in training with are all important