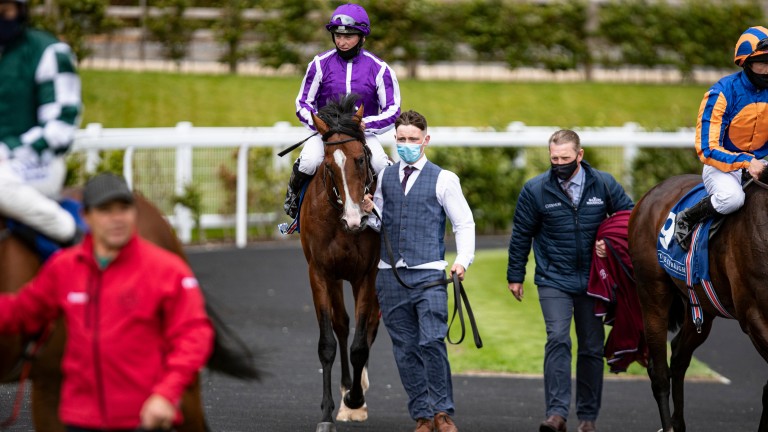 Hudson River and Seamie Heffernan return from their maiden victory at the Curragh
Patrick McCann
1 of 1
By Tom Peacock UPDATED 5:54PM, JUN 28 2020

A succession of meetings between two modern-day superstars got off to the best possible start as Hudson River made a successful debut at the Curragh.

The colt has an eye-catching pedigree even among Coolmore's plethora of choicely-bred two-year-olds as he is the first foal of Mecca's Angel, the dual Nunthorpe Stakes winner for Michael Dods and David Metcalfe.

The popular grey joined the Coolmore fold following a private sale at the end of her career in 2016 and Hudson River is the first of three foals she has produced by its leviathan stallion Galileo.

Now in the care of Aidan O'Brien, he started off over seven furlongs in the Irish Stallion Farms EBF Maiden and was fairly weak in the market as he drifted out to 3-1 joint-favourite from an opening 9-4. 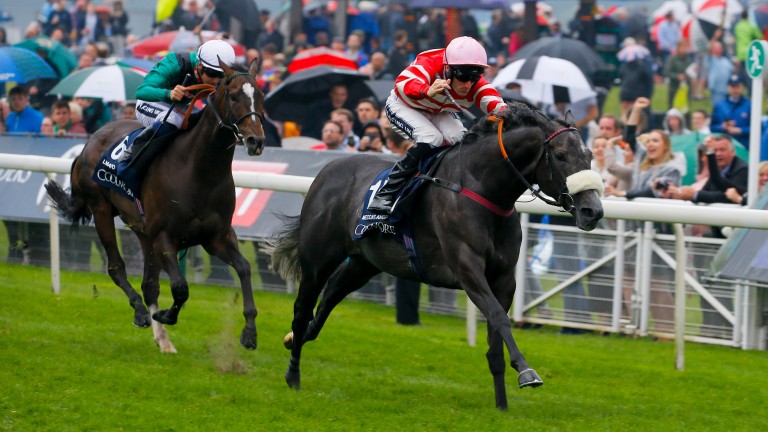 Mecca's Angel was a dual winner of the Nunthorpe
Mark Cranham

Ignorant of any such doubt, Hudson River was quickly to the head of affairs under Seamie Heffernan and responded to quite stern pressure in the final couple of furlongs to finish a length and a half ahead of €125,000 newcomer Ace Aussie and another O'Brien and Galileo debutant in Wembley, a brother of Group 1 winner Johannes Vermeer.

It was quite a day for Heffernan, who was to ride two more Galileo-sired winners for O'Brien. Most notable was a fifth Group 1 for Magical as she strolled to victory in the Alwasmiyah Pretty Polly Stakes, while Tiggy Wiggy's half-brother Napa Valley continued his education in the Finlay Volvo Cars Race.

Of Hudson River, the jockey said: "Smart colt, bred to be speedy. He went in the gates and he’s got a nice action.

"I didn’t go over-quick the first bit, he was having a look in front, from the three [furlong marker] to the two I was clicking at him and from the two to the one he lengthened. He’s a nice prospect."

Asked on Racing TV where Hudson River featured in the Ballydoyle two-year-old pecking order, Heffernan replied: "I’d say we’ve got about 10 in around the same as him."

Mecca's Angel has produced two more daughters in the interim. Dods bought her for a mere 16,000gns from her joint-breeder Yeomanstown Stud at Tattersalls Book 2 in 2012.

Her Dark Angel full-brother Markaz became a stallion at Derrinstown Stud after winning several Group races while their younger sibling Sir Oliver was off the mark for Richard Hughes earlier this year.