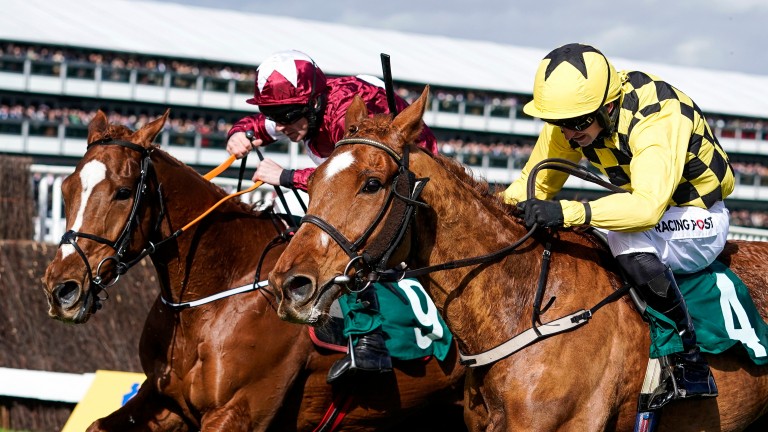 The powers of late sire Germany were showcased in a thrilling renewal of the Marsh Novices' Chase at the Cheltenham Festival on Thursday as one son, Samcro, came out best in a photo finish with Melon, while another son, Faugheen, ran a gallant third at the age of 12.

Germany, by Trempolino, was trained in Germany by Bruno Schutz for Jaber Abdullah and won twice at Group 1 level including in the country's most prestigious all-aged race, the Grosser Preis von Baden, in 1995.

After his retirement from racing he originally stood in Germany before moving to Ireland, spending four seasons at Clongeel Stud in County Cork and then moving to Woodlands Stud in County Galway, where he covered from 2007 to 2013.

Germany did not leave as many jumps-bred offspring as many sires, but managed 80 winners from 432 runners in Britain and Ireland and had an uncanny knack of getting top-notchers, as Samcro and Faugheen go to show.

Samcro, trained by Gordon Elliott for Gigginstown House Stud, looked to have the world at his feet when he won the Deloitte Novice Hurdle and Ballymore Novices' Hurdle in 2018 but he struggled against his elders in hurdles in the following season and had his resolution called into question.

However, he has done well over fences this season, winning easily at Down Royal, falling when holding every chance in the Drinmore Novice Chase in December and finishing second to Faugheen at Limerick at Christmas.

Any doubts about how genuine he is were dispelled when he put his head down and fought out victory over Melon, a son of Medicean, at Cheltenham.

Third-placed Faugheen “the machine” has won 17 races for Willie Mullins and owner Rich Ricci, 11 times at Grade 1 level. He is a standing dish at Cheltenham, where he has won the Ballymore and Champion Hurdle and finished third in the Stayers' Hurdle.

Germany is also responsible for two other festival winners – Captain Cee Bee, who took the Supreme Novices' Hurdle in 2008, and Tiger Cry, who scored in the Grand Annual that same year.

Samcro was bred by Douglas Taylor, whose colours were carried to Cheltenham Festival victory by Final Approach in the County Hurdle in 2011.

He is out of the unraced Saddlers' Hall mare Dun Dun, a sister to Reynoldstown Novices' Chase winner Master Of The Hall and Rendlesham Hurdle third Featherbed Lane and a half-sister to dual Leinster National scorer Pairofbrowneyes. Further back it is the family of top-class two-mile chaser Sound Man.

The mare's last foal is Samcro's Sister, a four-year-old filly by Jet Away who made her debut between the flags at Ballycahane on Saturday but was pulled up as joint favourite behind Tattersalls Cheltenham Festival Sale entry Chosen Port.

Samcro was a €95,000 purchase by Bobby O'Ryan at the Goffs Land Rover Sale and after winning a Monksgrange point-to-point for Colin Bowe he topped the inaugural Goffs Aintree Sale when sold to Elliott for £335,000.

Bowe's graduates have been in fine form at this year's Cheltenham Festival as he also originally trained Wednesday's winners Envoi Allen and Ferny Hollow.

FIRST PUBLISHED 3:20PM, MAR 12 2020
Germany had an uncanny knack of getting top-notchers, as Samcro and Faugheen go to show