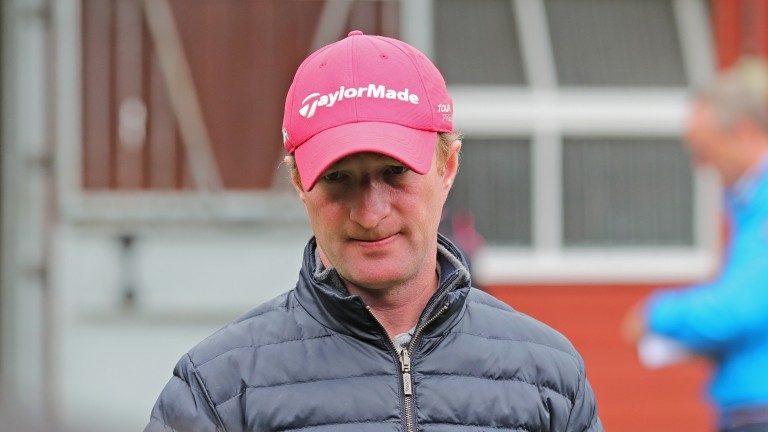 Mark Grant: remaining upbeat about turning a profit on his breezers this year
Tattersalls Ireland
1 of 1
UPDATED 1:17AM, MAY 17 2020

Consignors in Britain and Ireland were always a little backward in coming forward when it came to the online promotion of their wares. Not that it ever mattered that much, as live sales allowed ample time for horses to be shown off to a wide range of potential buyers before their fate was decided in the ring.

However, with the coronavirus crisis having wiped out all public auctions of thoroughbreds in Europe for the last two months and forced the breeze-up season into a long hiatus, plus lockdown restrictions making it difficult for stock to be inspected on farms, many vendors have been scrambling to build a digital presence.

Jump jockey and budding breeze-up consignor Mark Grant is the latest to set out his stall online. His new website showcases the two-year-olds he has pinhooked and is preparing for sale from his base in Lambourn, where he also offers breaking and pre-training services.

“I'd been planning on putting a website together for a while and when this all happened I just thought there's no time like the present – I'll get it done and that way prospective buyers can see what we have,” he says.

“I hope the sales go ahead, but in the circumstances we're going to have to sell what we can from home.”

Luckily Grant had the assistance of his wife Eimear, daughter of renowned jumps trainer Noel Chance, in setting up the website. She is no stranger to effective promotion strategies, working as she does as client relations manager for Irish Thoroughbred Marketing.

“We've had a lot of people looking at the site and received a few phone calls, so there's been bits of interest,” Mark says. “We've not moved on any of the two-year-olds yet but hopefully we can get one or two sold on the back of it.”

The timing of the global pandemic has been unfortunate for all breeze-up consignors, but it has been even more critical for Grant as he had ploughed more money into his pinhooks in his second year going it alone in this sector.

However, he is looking on the bright side and hopes that the deeper investment in his breezing material means he now has a better standard of horse on his hands, and that his lots will therefore hold their value.

“It's the second year we're having a proper go at it ourselves,” he explains. “In 2018 we did a few in partnership with a client – they invested and we did the horses. Last year on our own we sold a few and they did well, including Tinnahalla, who won a Naas barrier trial and was sold at the Goffs London Sale for £105,000.

“The idea is to gradually build it up every year, so we did invest more in yearling sales. That could be construed as bad timing, but on the other hand it means we've got at least five nice horses by fashionable sires and I'm sure we'll sell them all. I'm even confident that we'll get a bit of profit out of them.

“So it's not all doom and gloom. There's been plenty of interest with people ringing up and a few agents coming to see the two-year-olds while maintaining social distancing.”

The focus of Grant's breeze-up activity this year is at the amalgamated Goffs UK and Arqana Breeze-Up Sale, scheduled to take place at Goffs' Kildare Paddocks in the last week of June. He has a draft of five for the auction.

“The Dandy Man colt is very smart, he's out of a good Invincible Spirit mare and was a £50,000 Goffs UK Premier yearling,” says the consignor.

“Our Cable Bay colt was bought at Ascot [for £20,000]; he's a nice horse who has done nothing but improve since we've had him and has been very easy to deal with. He's a half-brother to Group 3 winner Chilworth Icon, so has a good page too.

“The Night Of Thunder filly [a €35,000 Fairyhouse yearling] is certainly by the right sire, and she's out of a French mare who was black-type herself. She's going well – she's a very forward sort and looks quick. You could probably run her in a few weeks' time if you wanted.

“Then we have a nice Starspangledbanner filly who was bought at the Orby Sale for €24,000. She's a full-sister to Tinnahalla, and I purchased her on the back of him, really, although she's from a top family generally. She looks very fast.

“Finally there's the Dark Angel filly who cost 26,000gns from Book 3. She goes well, and her full-sister was third in a back-end maiden for Sylvester Kirk last year. Her other siblings are both winners, too.”

Grant feels the long delay in the breeze-up season getting off the ground has been beneficial to one of the two remaining two-year-olds he has for sale this year, but detrimental to the other.

“We have a backwards Kodiac filly for the Tattersalls Ireland Goresbridge sale – she's in the rare position of actually benefiting from the coronavirus crisis as she's in need of the time until the auction's delayed date of July 24," he says of the €16,000 Fairyhouse yearling buy. "She should be spot on by then.

“But then we also have a horse by the first-season sire Estidhkaar, and we've gelded him. He was entered in the Ascot breeze-up sale [due to take place March 31 and April 1, but postponed] and I'd just worry that he's missed his window a bit, as he looked early and very precocious.

“He goes well and will still do someone a job, but maybe he'll be more of a trainer's horse and a handicapper.”

Grant will need to generate income from his pinhooks to mitigate the inevitable downturn in business in his breaking and pre-training yard due to the cancellation of racing.

“That side was going well, we had 24 or 25 in as we do all of Jamie Osborne's two-year-olds and had a couple of Nicky Henderson's,” he says. “But when lockdown was enforced and racing was called off, many people understandably took their horses back and gave them a holiday, so we're down to ten at the moment.

“We'd like more breakers, they're the bread and butter of the business, and I'd hope that will pick up again when racing and sales restart, especially the store sales.”

Grant has stated that his long-term aim is to return to his family's Fairview Stud in County Tipperary, nestled between the bases of two past masters of the breeze-up game in Willie Browne and Thomond O'Mara, and scale up his breeze-up activities from there.

In the meantime, the quality of the soil of the home farm was advertised at the Cheltenham Festival just before lockdown when the Nicky Henderson-trained Allart, bred in the name of Grant's mother Elizabeth, ran an encouraging fifth behind stablemate Shishkin in the Supreme Novices' Hurdle.

The son of Shantou would have been Elizabeth Grant's second winner of the race after Menorah, who is now in retirement with Mark Grant's brother-in-law Richard Johnson.

“He ran a good race and is a big, scopey horse so there should be more to come from him,” says Mark of Allart. “My parents tend to sell all their colts as foals if they can, but when they have fillies I tend to break them in over here and they run in point-to-points or bumpers.”

For now, though, the priority is trading the Flat two-year-olds he pinhooked and hoping he can update the lot details on his new website with those magical four letters: S-O-L-D.

FIRST PUBLISHED 5:13PM, MAY 16 2020
We'd like more breakers, they're the bread and butter of the business, and I'd hope that will pick up again when racing and sales restart