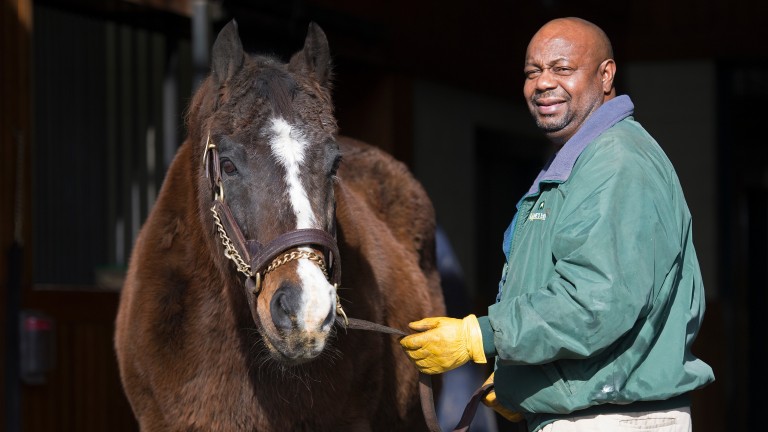 Every morning at 6:30, the multitude of grooms at Lane's End go through the motions. One by one, the farm's stallions are retrieved from their paddocks and marched back toward the barns to be washed, groomed, fed, and prepped for the breeding shed.

When 2pm rolls around, the process begins anew. One by one, with military precision, the stallions are led from their stalls and turned out for the evening, where they remain until the dawn breaks and the familiar jangle of lead ropes echoes across the fields.

It's a comfortable and reliable routine; a set of motions as familiar and innate as circadian rhythms.

Every one of Lane's End's 15 – soon to be 17 – stallions listed on the roster at the Kentucky farm are active thoroughbred studs tasked with perpetuating the gene pool of one of the most coveted breeds of equine in the world.

Every one of them but one.

A.P. Indy, the 30-year-old foundation sire of the Lane's End legacy – and one of the greatest North American sires in thoroughbred history – keeps the same schedule as his younger colleagues, minus the trip to the breeding shed.

But if it wasn't for him, many of the stallions in the property's historic barns wouldn't exist.

Day after day, season after season, pensioner A.P. Indy – who will celebrate his actual 30th birthday March 31 – is still the head of the stallion ranks, leading the charge from the barns to the paddocks and back again. 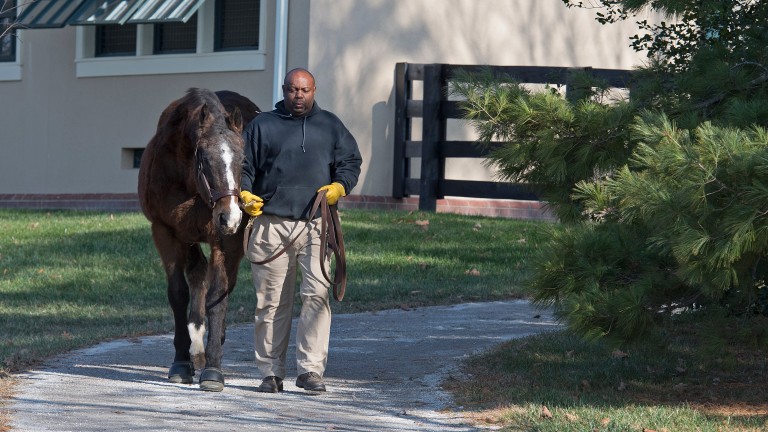 A.P. Indy is led between his paddock and his stable at Lane's End
Anne M. Eberhardt
Standing on the threshold of a stall he has occupied for almost 25 years, a stallion show in full swing, A.P. Indy is less than enthusiastic about having his routine disturbed. With a grip that calls to mind some of the famous strength that earned him fame and fortune at the races, he grabs a hold of his groom's arm with his mouth and tugs him past the gate.

"Come on, man," Asa Haley laughs while nudging A.P. Indy playfully in return. "Are we doing this today?"

Back and forth, like kids playing tug of war, they go, as the audience in the barn looks on and smiles.

As an onlooker, I'm struck by the thought that the stallion in front of me predates me by two years. He won his first Grade 1 race a month after I was born. He was named Horse of the Year before I could walk. The enormity of his achievements cannot be overstated.

But with 22 years of experience at Lane's End, Haley looks at A.P. Indy more as a brother. He has been there to witness most of the horse's life, and their relationship is one of familiarity and respect, sprinkled with the occasional peppermint.

"He loves peppermints," Haley said. "He used to be in to apples when he was younger, but now it's mostly peppermints. But only the puffy, soft ones."

Haley took over for the pensioned stallion's former groom, Kenneth Burress, when Burress made the transition to night watchman. After A.P. Indy was pensioned in 2011 due to declining fertility, the decision was made to keep the stallion on the same schedule he'd known for most of his life.

According to Haley, the routine keeps him young and helps remind the others he's one of the guys, even if he's 30.

"I've worked with him for close to 15 years, give or take," said Haley. "He's just a really nice horse; really gentle. He's so easy to get along with – all you have to do is tap him on the leg and he knows what to do. Maybe when he was on the track he was a different story, but ever since I've known him, he's only been gentle.

"He does bite on me all the time," Haley added, still chuckling. "I guess I'm his chew toy. That's something that just started one day out of the blue. He just reached up and grabbed me, and I looked at him like, 'What are you doing?' The next thing I knew, he had me in his mouth again, and it's been going on ever since. He just loves to play. I let him bite all over me."

While most know him as simply "A.P," Haley calls the legend "Head" – a fitting name for a stallion who is undeniably the foundation of a thoroughbred dynasty that has left an indelible impression on the breed.

A legend in the making

Bred by Lane's End founder William S. Farish and his partner William Kilroy, A.P. Indy was born thoroughbred royalty, a son of Triple Crown winner Seattle Slew. At the time of his birth in 1989, his dam, Weekend Surprise – a daughter of Secretariat – had already proved her prowess as a broodmare by producing champion three-year-old Summer Squall.

Sent to the 1990 Keeneland Summer Select Yearling Sale, the striking bay was purchased for a stunning $2.9 million by BBA Ireland as agent for Japanese businessman Tomonori Tsurumaki.

From there, as they say, the rest is history.

A.P. Indy broke his maiden on second asking for trainer Neil Drysdale on October 27, 1991, at Santa Anita Park. He followed that effort with another win in a December 4 allowance race at Bay Meadows and added yet another win 18 days later in the Hollywood Futurity at Hollywood Park.

Back at three, A.P. Indy took the San Rafael Stakes and then the Santa Anita Derby before his connections set their sights on the Kentucky Derby. When a foot bruise and blind quarter crack in the colt's left front hoof derailed his chances of a win beneath the Twin Spires, he was rested – only to bounce back even better. A.P. Indy won the Peter Pan Stakes and finally added a Classic score in the 1992 Belmont Stakes at Belmont Park.

A.P. Indy ran fifth in the Molson Export Million Stakes at Woodbine, then fell in the gate next out in the Jockey Gold Cup at Belmont, rallying in deep stretch to finish third.

A short 21 days after his fall in the Gold Cup, he came back to dominate by two lengths in his final race, the 1992 Breeders' Cup Classic at Gulfstream Park.

He was named 1992 champion three-year-old colt and Horse of the Year in one fell swoop, and all thoughts turned to his potential at stud.

Despite being classified as a ridgling – the undescended testicle was surgically removed during his racing career – it didn't take long for the accomplished racehorse to prove his fecundity in spades.

From Classic winner to franchise-maker

"He's had a tremendous impact in a time when his average book size over 18 seasons was 68 mares," said Bill Farish of Lane's End. "Nowadays, that's laughable. It's amazing to see that kind of influence from such small crops. He had 13 per cent stakes winners over 18 seasons. You just don't see numbers like that."

And while A.P. Indy has been enjoying retirement, his sons and grandsons have excelled in breeding sheds around the world. Four of the top 25 stallions standing in North America are sons of A.P. Indy: Flatter (ranked number ten), Malibu Moon (11), Congrats (24), and Majestic Warrior (25). Three more sons – Bernardini (33), fellow Lane's End stallion Mineshaft (35), and Jump Start (43) – can be found in the top 50.

Those sons, as well as others, are responsible for an additional three grandsons of A.P. Indy who have cracked the top 50: Tapit (five), Tapizar (30), and Dialed In (34).

A.P. Indy was named leading sire in the US in 2003 and 2006 and leading broodmare sire in 2015. He is one of only 20 horses to have been awarded both titles during their stallion careers in the past century.

"It's incredible what he means to us," Farish says. "He revived the Bold Ruler line that we were desperately in need of as breeders. With the Northern Dancer and Mr. Prospector lines being so prominent, we needed another branch, and he almost single-handedly provided that. There's no way to know where we would be if that hadn't happened.

"For Lane's End, he really is the franchise-maker. The farm had been in existence for 20 years before he was born, and the last 30 years with him have been incredible."

Among the many grandsons and great-grandsons climbing in the sire ranks, several can be found in the same barn as their esteemed ancestor. Grandsons Mr Speaker and Tonalist, as well as son Mineshaft and Honor Code, are staples on the Lane's End roster.

In addition to taking care of A.P. Indy, Haley is also the lead groom for Mineshaft and new recruit West Coast, a grandson by Flatter.

"I've had Mineshaft since he came off the track," Haley said, "and West Coast is settling in really well. He's part of the first family, so it's great to have him. I can't complain."

The legend at his finest

Situated among the paths where the stallions are shown on the farm, a bronze statue of A.P. Indy keeps watch over the barns. But for all the perfection of its metallurgical conformation, it still pales in comparison to the real thing. Even today, when the farm hosts an open house, the first name everyone asks for, as both Farish and Haley will tell you, is A.P. Indy.

"He's not a horse to me – he's a person," Haley said. "But when people come, that's who they want to see – A.P. Indy. If people see me out in public and recognize me, they always ask how he's doing. He's very close to my heart." 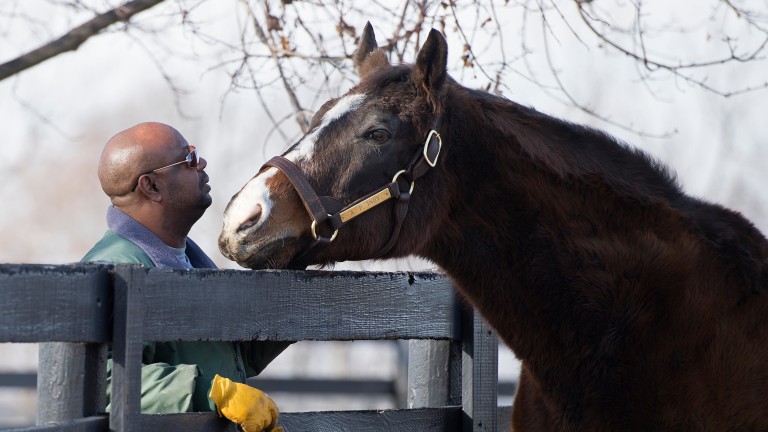 A.P. Indy in his paddock with Asa Haley
Anne M. Eberhardt
"Not a person comes to the stallion barn who doesn't want to see him," Farish said. "[Even] if they're not coming to see him, specifically, in the first place.

"He's part of my dad's legacy. While I get to be a part of it, this is his doing, and it means so much to him. It dawned on me this year that Dad turns 80 this year, A.P. Indy turns 30, and the farm turns 40 – all in the same year. Dad and A.P. Indy also have their birthdays in the same month, which is great. It's great to see A.P. Indy so happy."

Secure in his legacy and his place as "Head" of the Lane's End stallion barn, A.P. Indy is happiest when turned out in his paddock. He trots to the center, surveys the farm, then takes one turn around the fence before settling in to graze under his favorite trees. And when Haley comes to fetch him in the morning, he'll follow the same routine all over again.

Someone has to show them how it's done.