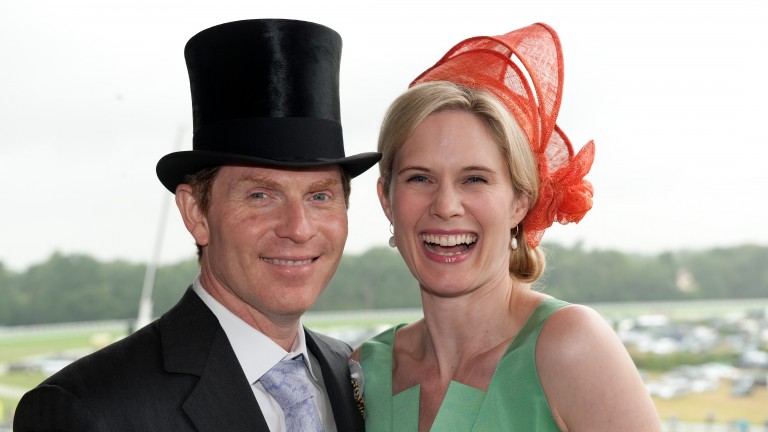 The mare viewed as the marquee attraction in celebrity television chef Bobby Flay's planned dispersal of his European-based bloodstock was led out of the Fasig-Tipton November auction ring Sunday night as the highest-priced RNA of the record-breaking sale.

Cover Song, a Grade 3 winner by Fastnet Rock out of Galileo's European champion daughter Misty For Me - and thus a half-sister to Group 1 winners US Navy Flag and Roly Poly - failed to reach Flay's reserve when bidding stopped at $3.9 million.

"Bobby's not in a position where he needs to sell," said Bradley Weisbord of Elite Sales, who consigned the five-year-old mare, who is in foal to Dubawi on an early cover. "He put a [reserve price] number that I thought was very fair for her pedigree, her physical, her age [and the fact she is] in foal to Dubawi.

"But Bobby's not afraid to buy one back and have a great foal," Weisbord added, explaining that Flay's intention was to sell Cover Song as part of consolidating his breeding stock in the US so that he could be closer to all his horses. "She was here to be sold but clearly didn't reach her mark." 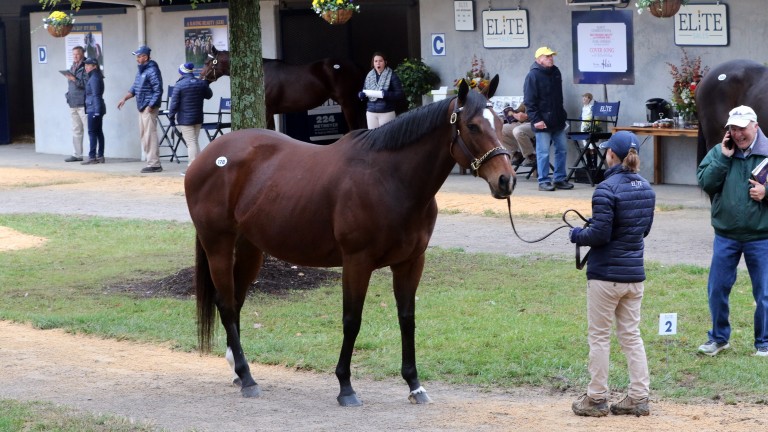 Cover Song: the half-sister to US Navy Flag was led out unsold at $3.9 million
Fasig-Tipton Photo
Other mares listed as not sold at the Fasig November sale included Akron Moon, an eight-year-old Malibu Moon mare carrying a full-sibling to Quality Road’s Grade 1 winner Bellafina who was RNA’d at $2.7m; Loving Vindication, the 13-year-old dam of Canadian champion Wonder Gadot who is in foal to Curlin at $1.45m, and Love The Chase, the 12-year-old dam of two-time Horse of the Year California Chrome who is in foal to Uncle Mo and went unsold at $1.3m.

Meanwhile, Weisbord said Cover Song was expected to be sent to Arthur Hancock's Stone Farm, where Flay boards his US mares, to await the birth of what will be her first foal.

Flay, who has entered other horses he owns in Europe at the Tattersalls December sales, paid $1.6m for Cover Song at the 2016 Fasig November sale. Since then, US Navy Flag earned the championship title as Europe’s best two-year-colt of 2017 and this year won the July Cup, while Roly Poly has racked up three Group 1 wins.

Spendthrift Farm raced Cover Song to her victory in the Grade 3 Autumn Miss Stakes at Santa Anita Park after buying her as a yearling for $450,000. Following her sale to Flay, Cover Song raced twice more without success, competing for the final time in June 2017 before being bred to Dubawi last February.

Elite and Fasig-Tipton had announced in October that Cover Song would be the first mare ever offered for sale at the November auction in foal to Dubawi. In that same press release, Flay had said that his stock that had been based in Europe would be "offered without a reserve."

"To be clear, I am not leaving the business as a whole," Flay said in the press release. "In fact, I will continue to add more robust pedigrees to my American team now and in the future. This decision is strictly based on geography and where I spend most of my time. I look forward to seeing these special horses find new homes and at the same time I look forward to a more focused domestic business."

Tattersalls recently issued a media statement that read: "the dispersal of Bobby Flay's European stock looks set to attract plenty of attention with the eight-strong team consigned by Baroda and Colbinstown Studs including the regally-bred, stakes-placed Montjeu mare Auld Alliance, in foal to Frankel, the Group 3-winning, Grade 1-placed Banzari, in foal to Fastnet Rock, and the Group 3 winner Albisola in foal to Lope De Vega."

More US racing and breeding news: