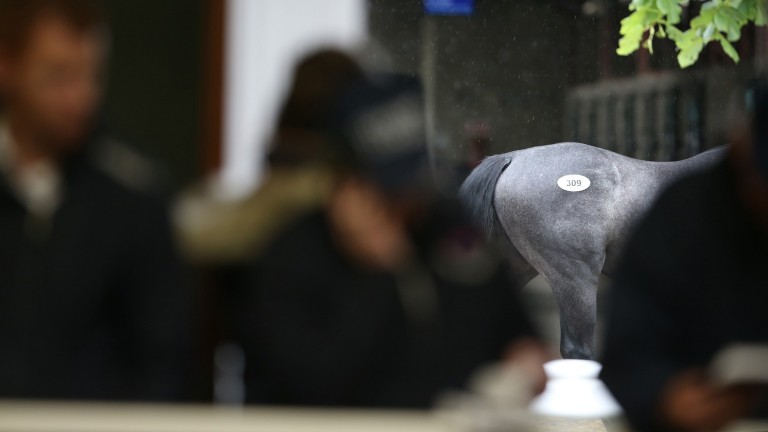 The filing of the lawsuit was reported on Thursday by the Lexington Herald-Leader
Caroline Norris
1 of 1
By Frank Angst of BloodHorse 2:07PM, FEB 10 2019

A class-action lawsuit has been filed against Hagyard-Davidson-McGee Associates and four of its partners alleging that for about a decade they falsified dates on radiographs of horses being offered for sale at Keeneland public auctions, a practice the suit claims negatively impacted the plaintiff.

In the lawsuit filed on Thursday in Fayette Circuit Court in Kentucky, Illinois-based owner-trainer Tom Swearingen is named as the plaintiff in the class-action complaint that could add more plaintiffs.

The vet partners named in the lawsuit - Michael Hore, Robert Hunt, Dwayne Rodgerson and Michael Spirito - have all self-reported to the Kentucky Board of Veterinary Examiners that they had modified dates on radiographs submitted to the Keeneland repository, according to the lawsuit.

Mike Casey, an attorney for Hagyard Equine Medical Institute, said it will vigorously fight the litigation.

"Hagyard Equine Medical Institute believes the lawsuit filed Thursday in Fayette Circuit Court regarding several of Hagyard's veterinarians is without merit and will demonstrate it is based on a fundamental misrepresentation of the facts," Casey said.

"We will vigorously address the misrepresentations and claims made in the suit through the proper legal channels."

Keeneland, which is not named as a defendant in the lawsuit, declined to comment.

Radiographs offered at sales through a repository provide the benefit of central information, eliminating the need to run numerous radiographs and endoscopic exams of horses during a sale session. Keeneland provides the information for free.

Keeneland's repository rules for the September Yearling Sale require submitted radiographs to be taken within 21 days of the date a horse is to be auctioned, while for its mixed sales in November and January, the requirement is within 15 days of when a horse is to be sold.

The lawsuit alleges the practice of modifying dates went back to 2006 and impacted thousands of buyers. It said Hagyard submitted about 50 per cent of the repository radiographs at the Keeneland sales during this time and, of those, up to 10 per cent had the date "intentionally and fraudulently altered".

The lawsuit contends that the veterinarians involved deleted or destroyed the original digital radiograph files from the mobile radiograph machines.

The lawsuit points out that, over time, the number of radiographs with altered dates is significant.

The suit reads: "Collectively, the actions of the defendants have resulted in the submission of tens of thousands of fraudulent radiographs to the repository where buyers like the plaintiff, relying on the alleged integrity of the repository and reasonable belief that the rules were being followed, acted and bid with the confidence Keeneland sought to inspire, as reflected by the substantial prices commanded by a process which was believed 'lower risk' by virtue of the repository.

"In fact, beneath the surface, that was clearly not the case, and the repository engendered nothing more than false confidence as a result of the defendants' actions."

While the vets involved were sanctioned by the Kentucky Board of Veterinary Examiners, that regulatory board in its decision also included the statement, "The board agrees and acknowledges that there is no evidence that any radiograph taken by the respondent (each of the Hagyard vets) did not accurately reflect the condition of the horse." According to Casey the statement applies to all the claims.

In terms of actual impact on the plaintiff, the lawsuit states Swearingen deserves compensatory and punitive damages because he relied on the authenticity and accuracy of the radiographs in the repository, both in respect to the content displayed and the date on which it was taken, in purchasing 24 horses for a total of $432,600 from January 2007 through September 2016.

In fact, the lawsuit states if the plaintiff had been aware that a percentage of radiographs in the repository had altered dates, he would not have participated in the sale in the first place and never would have purchased any of the 24 horses.

Bob Heleringer, a Louisville attorney who has taught equine regulatory law at the University of Louisville's Louis D Brandeis School of Law, suspects the plaintiff ultimately will have to show that the radiographs for horses he purchased were, in fact, incorrectly dated.

Beyond that, Heleringer said the court may want to see evidence that a horse with an altered-date radiograph had a change in physical condition between when the radiograph was actually taken and the falsified date.

On December 31, 2017 Hagyard merged with Mixed Animal Veterinary Associates of North America. The lawsuit called that a nearly $40 million deal.

The plaintiff seeks both compensatory and punitive damages as applicable. Also named in the lawsuit is accounting firm Dean Dorton Allen Ford.

The filing of the lawsuit was reported on Thursday by the Lexington Herald-Leader.

FIRST PUBLISHED 2:07PM, FEB 10 2019
Illinois-based owner-trainer Tom Swearingen is named as the plaintiff in the class-action complaint that could add more plaintiffs