'My tip for finding value in the jumps market? Look beyond the obvious' 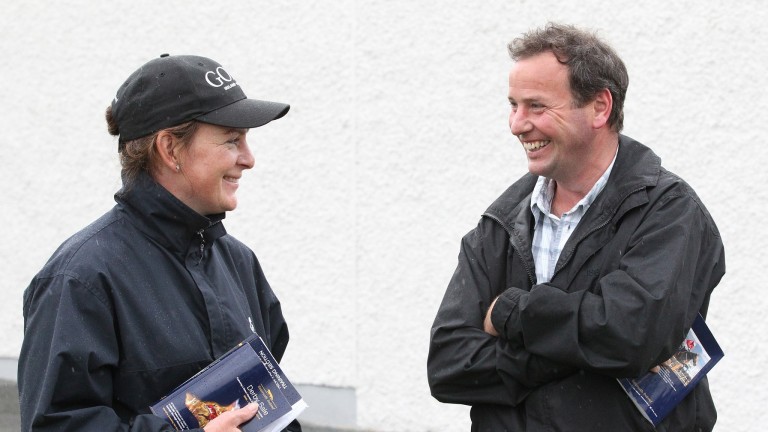 Who are some of the best horses you've bought and how did you source them? Imperial Commander is the best of them. We knew Colin McKeever had bought him from the Land Rover Sale and we saw him schooling in December as a three-year-old.

I mentioned the horse to Imperial Racing - or Our Friends In The North as they were known then - and we got him bought before he turned four and we trained him ourselves to win his point-to-point the following April. The plan was always that he'd go to Nigel Twiston-Davies after that. 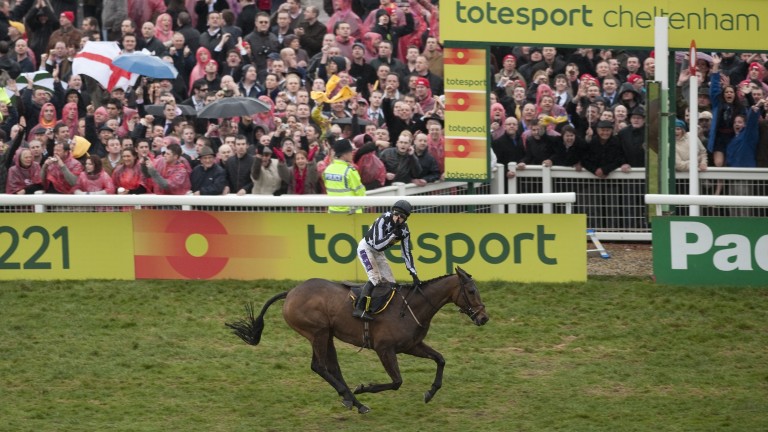 Imperial Commander: 2010 Gold Cup winner was bought by Kevin Ross as an unraced three-year-old
Edward Whitaker
Macs Joy was one of the good ones I bought early on with Francis Woods. We stood Macs Joy's sire, Religiously, and Jessica Harrington was very fond of the stallion and was looking for a young horse by him. Macs Joy had a light enough page, although he was out of a Supreme Leader mare, but he was a nice athletic horse so we bought him privately as a three-year-old.

We also bought Coeur Sublime. If it's soft at Cheltenham I could see him running a big race in the Champion Hurdle. He won a Flat maiden at Navan for Peter Fahey and then we bought him for Chris Jones at the Goffs Punchestown Sale [for €260,000].

Give us a lesser known purchase you’re particularly proud of... I've got a particular soft spot for The Storyteller. The owners Joe Sloan and his wife Pat have been great supporters of ours, they've been with me since I first started buying horses. We got them a Festival winner with Flaxen Flare and The Storyteller won there a couple of years back [Brown Advisory & Merriebelle Stable Plate Handicap Chase] and also won a Grade 1 [Champion Novice Chase].

We bought The Storyteller at the Land Rover and he's rarely disappointed us. He's such a tough horse and he'd be one of the leading fancies for the Pertemps this year. 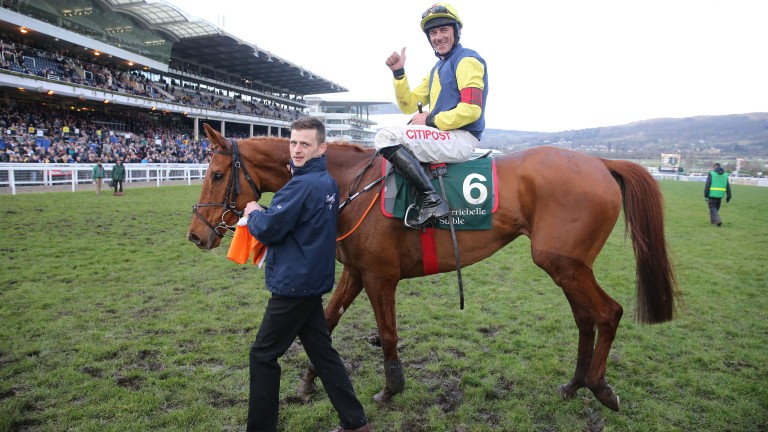 The Storyteller: winner of the 2018 Brown Advisory & Merriebelle Stable Plate Handicap Chase is a leading fancy for the Pertemps Final having finished sixth in a qualifier at Leopardstown
GROSSICK RACING

What do you like to see in a pedigree at foal and store sales? I like a good damsire. I would follow which damsires are producing good horses closely, the likes of Supreme Leader, he'd be one of the top ones. Presenting looks like another promising broodmare sire. He was probably a better sire of geldings than fillies on the track, but he looks as if he's doing well as a broodmare sire now.

What are the most unusual circumstances you've bought a horse in? Last week we bought Largy Debut privately while I was away skiing in Sierra Nevada, so I was on the slopes trying to get that done!

Thankfully I was at Oldtown when he won his maiden [by 13 lengths] the day before we left. I'm not sure where he'll go yet, he was bought for a long-standing client and they'll make that decision in due course.

If you had to let another agent buy you a horse who would you choose? It would have to be Ross Doyle. Between himself and his father [Peter Doyle] they've bought so many good horses for the Hannons, he's got a very good strike-rate. Now he's buying good jumps horses for the Tizzards too, so you have to applaud him for that.

Mags O'Toole would be another one. It's no flash in the pan that she's bought so many good horses, she's a very good judge and Gigginstown employed her for a reason. 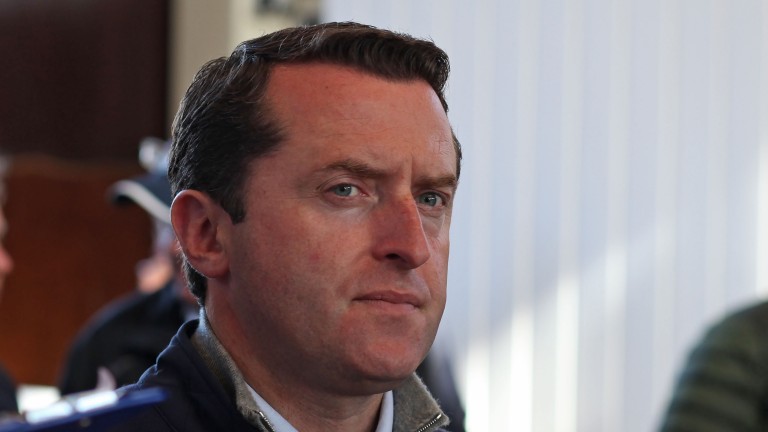 Ross Doyle: Kevin Ross is a big admirer of his work
Laura Green
What conformational faults can you not forgive, if any? I'm a bit of a stickler for horses who are back at the knee, especially with National Hunt horses. It's probably an old fashioned thing, but it was the way I was taught and it has stuck with me. They probably put a bit more strain on their forelegs when they're jumping and they're hard enough to keep sound as it is.

The one that got away? There's a horse called Queens Brook, who Gordon Elliott won a bumper with at Gowran recently. I'm not sure if we were the underbidder but I thought she was lovely at the sales and she looked very good in her bumper.

I also remember Vinndication as a store horse at Doncaster, I thought he was a lovely horse and was definitely one that I regretted not buying. He wasn't overly expensive either as Aiden Murphy bought him for £28,000.

Vinndication: the one that got away from Kevin Ross
Alan Crowhurst
Which young sire do you think could break through at Cheltenham? I hope that will be Elusive Pimpernel with Coeur Sublime. We've bought quite a few by him and we've been lucky with them. He'd only really been covering Flat mares up until last year and I believe he's close to being fully booked up this year.

What do you think is the reason for the surge in French success at the Festival? Because they're precocious and the fact they're jumping from a young age is a massive thing as well, they seem to be natural jumpers.

This isn't an overnight thing, though. My grandfather [Willie Rooney] stood Cantab, he was a French-bred who won the Triumph Hurdle as a colt for Ryan Price and then sired two Gold Cup winners in Little Owl and The Thinker.

With the National Hunt market so strong, give us a tip for finding value... Don't look for the obvious. Store horses probably look a bit of value, but if you go and buy one by a top sire with the best pedigree, it's going to cost you a lot of money. You have to pick an individual you like too, that's something that's served us well as we bought horses like If The Cap Fits for £30,000.

It's the same with form horses, if you go and buy the winner every time, you're going to have to pay big money. We bought Boothill in November [for £125,000] having finished second in a point-to-point before he won a Kempton bumper impressively for Harry Fry.

I thought he was a proper stamp of a chaser for the future. I'm not saying the horse who beat him in his point won't be better, but he cost double the money. You have to work within a budget and trust your own judgement. 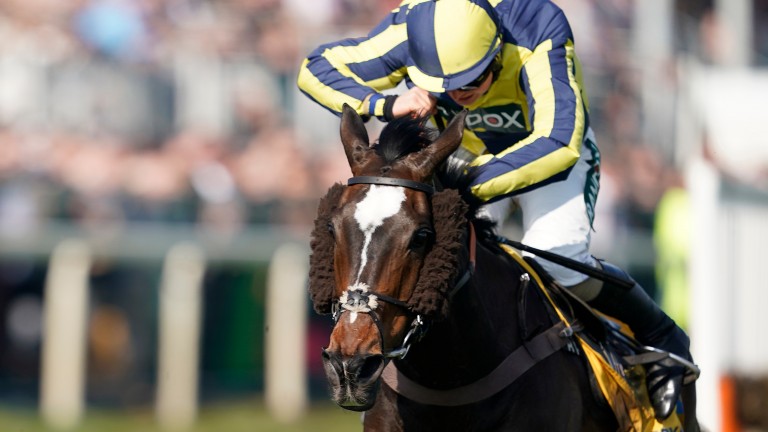 If The Cap Fits: Grade 1-winning hurdler was bought for just £30,000
Alan Crowhurst
Give us a horse who's under the radar for Cheltenham... We bought Plan Of Attack, who goes for the Kim Muir. He won at Aintree earlier in the season and finished third in the Paddy Power Chase at Christmas and has had this race as his target ever since. He'd have a nice each-way chance. He stays well and Barry O'Neill rides him and knows the horse well as he's won on him over hurdles.

Who is your nap for the Festival? That has to be Envoi Allen. He ticks all the boxes; he jumps, he stays, he's beaten everything he's faced, he's just rock solid. He's won at the festival before too.

If you found this of interest, you might also enjoy:

FIRST PUBLISHED 7:05PM, MAR 2 2020
Presenting was probably a better sire of geldings that fillies on the track, but he looks as if he's doing well as a broodmare sire now