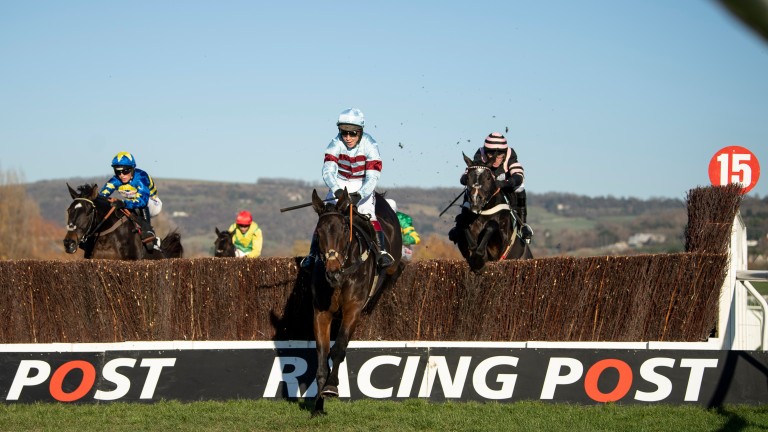 Just 11 days after Lalor's return to form for Paul Nicholls in the Paddy Power Handicap Chase at Cheltenham, his full-brother shelved his maiden tag in style when winning the concluding bumper at Hereford by five lengths.

Lallygag, who was bred by Stall 5-Stars and sports the familiar colours of David Staddon, moved to Nicholls' yard with his Grade 1-winning brother from Kayley Woollacott's last month and has since rapidly improved under the care of the champion trainer.

The son of the high-class German performer It's Gino was a respectable fifth on debut for Woollacott in April before finishing second at Newton Abbott last month for the Ditcheat handler.

His five-year older brother first sprung to prominence for the late Richard Woollacott when readily landing the Grade 2 bumper at Aintree in 2017.

The nine-year-old lost form following two placings in Grade 3 handicap chases at Prestbury Park, pulling up twice last season, before his move to Nicholls this winter.

4yo Lallygag makes-all to win the bumper at Hereford for @PFNicholls @CobdenHarry (a double on the day) David Staddon.Congratulations to all
He becomes the 3rd winner out of Laviola and this here is the cracking 7 month old Highland Reel filly foal pictured this afternoon pic.twitter.com/Hg1ZhK5WAe

Lalor was a €7,500 purchase by Ormond Bloodstock from the BBAG October Yearling Sale before selling to Tom Malone from Busherstown at the 2015 Tattersalls Ireland Derby Sale.

Lallygag is the latest winner for Laviola, a German-bred daughter of Waky Nao who has also produced a full-sister to Lalor and Lallygag in German Flat scorer Lilydale.

It's Gino stands at Haras du Lion in France, having previously covered small books in Germany.

'Godolphin's homebred renaissance? There are two factors - Appleby and Dubawi' (£)

FIRST PUBLISHED 5:27PM, NOV 24 2021
His five-year older brother first sprung to prominence for the late Richard Woollacott when landing the Grade 2 bumper at Aintree in 2017