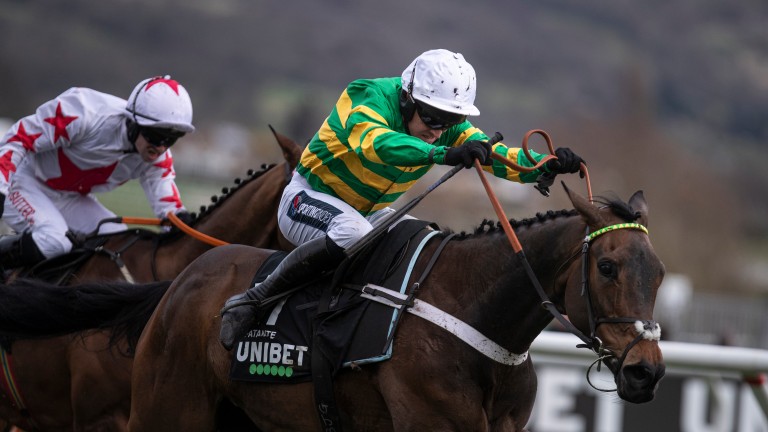 Ladies first: Epatante on her way to winning the Champion Hurdle
Patrick McCann
1 of 1
By Martin Stevens UPDATED 6:29PM, MAR 10 2020

International Women's Day was observed on Sunday but it was celebrated two days late at the Cheltenham Festival, as mares outshone their male rivals in two of the showcase races on the opening card of the meeting.

Just over an hour after Put The Kettle On landed the Racing Post Arkle, it was the turn of Epatante to win the Unibet Champion Hurdle.

A third female Grade 1 winner on day one of the festival was guaranteed, as the Close Brothers Mares' Hurdle was staged soon after, and the contest provided a superb battle between Honeysuckle and Benie Des Dieux – two mares who had previously beaten geldings in Grade 1 company and would not have looked out of place in the Champion Hurdle – with Honeysuckle emerging triumphant.

The results provide the perfect promotion for racing's administrators and those in the bloodstock industry who have done much in recent years to raise the profile of jumps racemares in the face of so few making the track, raising issues of welfare, financial losses for mare owners and the effects of breeding blindly from unraced mares.

Epatante – the fifth mare to win the Champion Hurdle after African Sister, Dawn Run, Flakey Dove and Annie Power – was bred by Francois-Xavier and Anne Doulce Lefeuvre in France and originally raced across the Channel, where she won a Grade 1 bumper for AQPS-breds at Saint-Cloud.

The six-year-old, trained by Nicky Henderson on behalf of JP McManus for the past two years, has now won seven of her nine starts and was successful last time out in the Christmas Hurdle at Kempton.

Epatante's exploits will drive further demand for her young sire No Risk At All, a son of My Risk who was a dual Group 3 winner and a close third in the Prix d'Ispahan in his racecourse pomp. The 13-year-old is also a half-brother to the classy chaser Nickname, who in a short stud career sired stars such as Cyrname and Frodon.

No Risk At All's early crops have also yielded Henry VIII Novices' Chase winner Esprit Du Large and the exciting Allaho, around a 4-1 chance for the RSA Insurance Novices' Chase on Wednesday.

Breeders who want to use the sire this year will likely be out of luck, though, as his custodians at Haras de Montaigu in Normandy revealed in a recent interview in the Racing Post that he was fully booked for 2020, being limited to 130 mares per season, and indeed was already a quarter of the way to being sold out for 2021 too.

Epatante is a half-sister to another talented jumps racemare in Tante Sissi (by Lesotho), a Listed Newbury hurdle winner.

The siblings are among four winners out of the winning Silver Rainbow mare Kadjara, who in turn is out of the placed Useful mare Evavia. The recent family had been a little light on black type, although one unlikely relation who does boast it is Tigre Du Terre, a smart handicapper at around a mile for Richard Hannon who now races in Hong Kong.

He is by Haras du Mesnil resident Doctor Dino, a son of Muhtathir who has also supplied the likes of La Bague Au Roi, Master Dino and Sceau Royal and stands this year at €16,000 – a record covering fee for a National Hunt stallion.

FIRST PUBLISHED 4:53PM, MAR 10 2020
Breeders who want to use No Risk At All this year will likely be out of luck