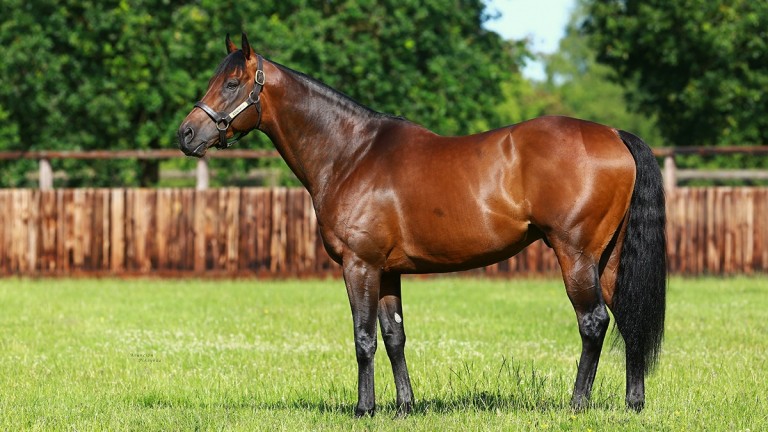 Kingman: Banstead Manor Stud stallion is firing on all cylinders
Asunción Piñeyrúa/Juddmonte
1 of 1
By Martin Stevens UPDATED 5:53PM, MAY 12 2019

Brilliant miler and Banstead Manor Stud stallion Kingman has been hailed by many breeders, agents and independent observers as the second coming since his first crop of juveniles yielded a good number of exciting prospects last year.

After Persian King, one of those talented two-year-old runners of 2018, ran out a decisive winner of the Poule d'Essai des Poulains at Lonchamp on Sunday, it continues to appear that the hype might be justified.

Persian King – trained by Andre Fabre for breeders the Wildenstein family and Godolphin, who bought a half-share in the colt at the start of the year – had defeated subsequent 2,000 Guineas hero Magna Grecia to win the Autumn Stakes last October and had been expected to return to Newmarket for the first Classic of the season.

However, Fabre elected to keep the colt in France and he backed up his five-length score in the Prix de Fontainebleau last month with a smooth one-length victory in the French 2,000 Guineas over Shaman, a Shamardal colt from the immediate family of Intello and Mondialiste.

San Donato, a son of Lope De Vega bought for 500,000gns from Book 2 of the Tattersalls October Yearling Sale, was a head back in third.

Persian King becomes the first Group 1 and Classic winner for Kingman, a son of Invincible Spirit who won the Irish 2,000 Guineas, St James's Palace Stakes, Sussex Stakes and Prix Jacques le Marois in his own racing career and is advertised at a fee of £75,000 at Banstead Manor Stud in Newmarket.

Incidentally, Invincible Spirit is also the sire of Magna Grecia, so the sire-line has had a big say in the early Classics this year.

Kingman has four other stakes winners to his name – the highly exciting Calyx, Look Around, Poetry and Sangarius – and no shortage of more unexposed runners who hold significant promise, such as Bowled Over, Full Authority, Tempus and Twist 'N' Shake, who all recorded first victories in the past week.

More big race success could fall to the stallion this week with daughters Nausha and Sparkle Roll entered in the Musidora Stakes at York and son Surfman set to line up for the Dante.

Persian King hails from an excellent Wildenstein dynasty as the second foal out of Pretty Please, a winning Dylan Thomas half-sister to Prix Ganay winner Planteur.

Pretty Please and Planteur are in turn out of the unraced Giant's Causeway mare Plante Rare, a half-sister to middle-distance Group winners Place Rouge, Policy Maker and Pushkin.

The family traces back to Princess Elizabeth Stakes winner Petroleuse, a half-sister to Oaks and King George winner Pawneese and granddam of the Wildensteins' great champion Peintre Celebre.

Plenty of stamina has been passed down those generations, which suggests that a step up to ten furlongs at least should hold no fear for Persian King.

It was a fine afternoon for Europe's sophomore sires, who look a vintage crop.

Kingman fillies all the rage at Arqana Breeze-Up Sale

Sires of 2019: Kingman has the ammunition for a stunning season

Meon Valley's One In A Million clan comes good with Anapurna

FIRST PUBLISHED 4:23PM, MAY 12 2019
Kingman has no shortage of more unexposed runners who hold significant promise, such as Bowled Over, Full Authority, Tempus and Twist 'N' Shake