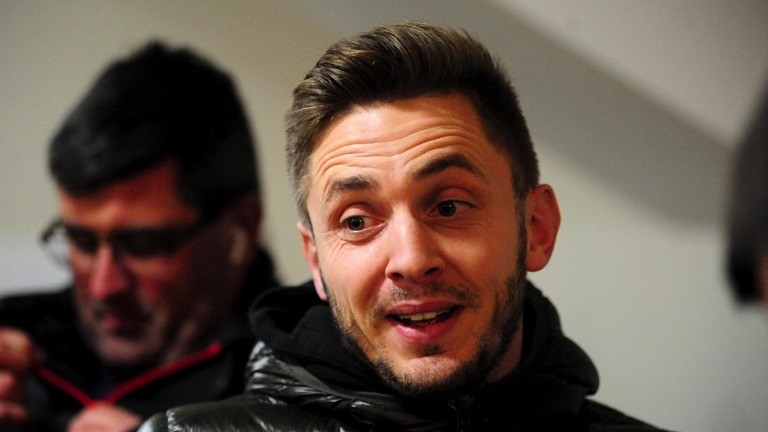 There was high drama at Fairyhouse on Tuesday evening when the Camelot half-brother to Altior was hammered down to former Irish international and Premier League footballer Kevin Doyle for €155,000 during the second foal session of the Tattersalls Ireland November National Hunt Sale.

Offered by Mark Dreeling and Barbara Fonzo of Coole House Farm on behalf of breeder Paddy Behan jnr, the June foal was led into the ring by Annie O'Rourke in front of a packed auditorium.

Auctioneer Edmond Mahony described the star attraction this week as "something a bit special" and called for an opening bid of €200,000, with Hamish Macauley signalling an initial bid of €100,000 from the gangway.

"He's got a wonderful temperament and had to put up with an awful lot of showing today," noted Mahony, as the bidding crept up in increments of €5,000 and €10,000.

Eventually, though, it was Doyle, who was stood alongside his father Paddy and leading consignor Peter Nolan in the tunnel opposite the rostrum, who emerged on top.

"He speaks for himself," said Kevin Doyle. "All the buyers knew about him and I had a proper look at him earlier today. There was nothing not to like about him. He'll return for sale in a few years."

Having delivered a Champs Elysees filly foal in April, the daughter of Yeats is back in foal to Flemensfirth.

"I get a great buzz out of seeing a foal being born," explained Doyle. "I love being involved in deciding which stallions our mares will visit and the breeding side of things. I've five mares at the moment and am happy with that number." 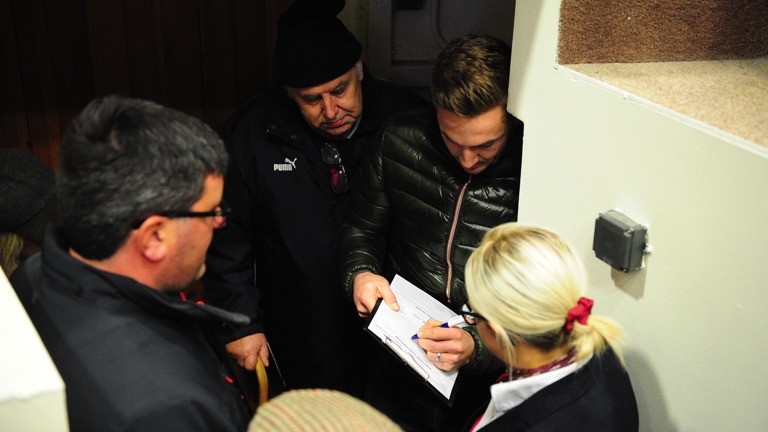 The record price paid for a foal at the November Sale remains the Presenting filly out of Best Mate's half-sister Sidalcea who was purchased by Netherfield Stud for €210,000 from Sunnyhill Stud at the 2007 edition during the height of the Celtic Tiger.

Altior set a new record for the most consecutive jumps wins after posting a 19th back-to-back success, and 20th overall, in the Grade 1 Celebration Chase at the end-of-season meeting at Sandown in April.

The nine-year-old son of High Chaparral was bred by Paddy Behan snr out of the Key Of Luck mare Monte Solaro, who is also the dam of the talented hurdle mare Princess Leya, and she was unsuccessfully covered by leading Flat sire Galileo in the summer.

"We tried but unfortunately she didn't get in foal," said Behan jnr. "We'll make a plan - at this stage, we're still undecided on what stallion she'll visit."

Monte Solaro's four-year-old Milan gelding - who topped last year's Tattersalls Ireland Derby Sale when purchased by Aiden Murphy and MV Magnier for €365,000 - is in training with Nicky Henderson, while the mare's two-year-old Walk In The Park filly has a date with the auctioneer at next year's Derby Sale. 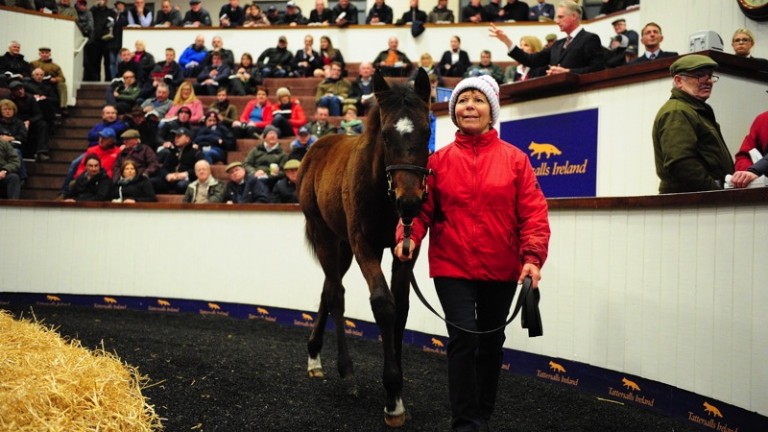 There was also much demand for the Getaway colt out of the dual winner Dreambaby, who went the way of Timmy Hyde for €95,000.

Offered by Yellowford Farm on behalf of GCE Farm, the March foal has an iron-clad pedigree, with his dam a closely related half-sister to the Challow Novices' Hurdle winner Wichita Lineman and a half-sister to Grade 1-winning hurdler Rhinestone Cowboy and Millys Gesture, who is the dam of Coney Island.

"It's a wonderful pedigree and he's a very good looking horse and a great mover," said Hyde. "We've not had anything from this family before and he'll be for resale."

The colt was bred by Pat Tobin, who said: "I bought the colt's granddam Monumental Gesture and bred Wichita Lineman from her. I also bred Millys Gesture, who is now the dam of Coney Island. It's been a wonderful family."

The fervour for Flemensfirth foals reached fever pitch at Fairyhouse, with Peter Molony giving €88,000 for the full-sister to Tornado Flyer from agent Castledillon Stud.

The February foal is out of the Exceed And Excel mare Mucho Macabi, a half-sister to the legendary hurdler Hurricane Fly.

"She's a beautiful filly and will become a broodmare down the line," said Molony from his position on the upper walkway.

Adrian Costello of Park Farm also went to €62,000 to secure a February-foaled colt by the sire out of the high-class Kayf Tara mare Give It Time.

"He's by a top sire, has a great pedigree and is a lovely foal," said Costello from his ringside position. "He's out of a good racemare by Kayf Tara and will come back here as a store."

Navan course specialist Give It Time placed in three Grade 2 hurdles at the County Meath track, and has plenty in the pipeline with a four-year-old Shirocco filly, a three-year-old Robin Des Champs filly and a two-year-old Walk In The Park filly.

A well-bred Getaway colt from the family of Empire Of Dirt and Monalee set the auction ring alight midway through the session when catching the eye of Aiden Murphy at €75,000.

Described by auctioneer Alastair Pim as a "wonderfully athletic son of Getaway", the March foal was bred by Brendan Fitzpatrick out of the King's Theatre mare Wattle Bridge, who the breeder purchased as a yearling.

"I wanted a mare and could not afford to buy an older one so decided to buy a yearling. I leased her to a racing club to run in England and then had her back to breed from."

The colt is a grandson of the Thyestes Chase winner Be My Belle, whose son Snake Eyes landed a Listed handicap hurdle at Sandown.

Wattle Bridge is already the dam of four-time winner Benny's Bridge, who holds an entry for the Grade 3 Greatwood Handicap Hurdle at Cheltenham on Sunday. 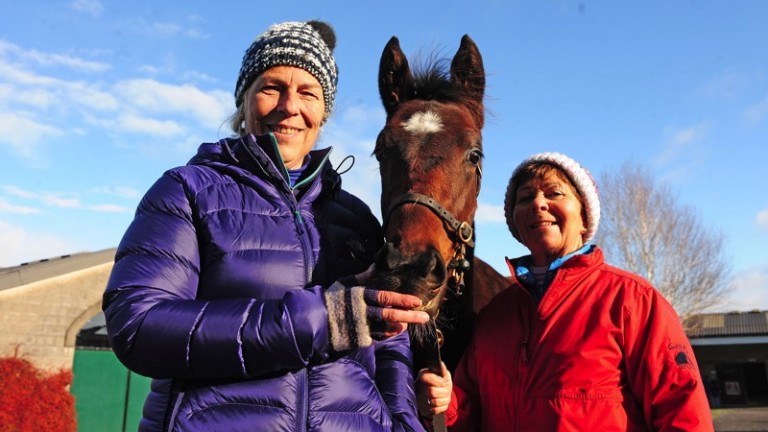 Two foals passed the €50,000 mark early in the piece, with Timmy Hillman signing on the dotted line at €65,000 for a Kayf Tara grandson of the Grade 2 novice hurdle winner Diamant Noir.

The March foal is out of the Lomitas mare Amber Cloud and was sent into the ring by Will Kinsey's Peel Hall Stables.

Former trainer Kinsey acquired the colt's dam after she had won a Fontwell bumper for Jonjo O'Neill, and he saddled the mare for her second win in a Catterick novice hurdle.

"She's doing really well as a broodmare and has thrown some lovely foals. This colt has always been a star, and we wanted to come here with one that we thought a lot of so that people could see what we are about, and thankfully it has worked out."

Blue Bresil all the rage

The other foal to pass the €50,000 mark early on in the session was White Bloodstock's Blue Bresil colt, who caught the eye of Ciaran 'Flash' Conroy and Aiden Murphy at €56,000.

"He's a nice horse, a good mover and has a nice build," said Conroy. "It's all happening in the family."

The February foal is out of Perfect Promise, a Grade 2-placed novice chaser by Presenting and full-sister to the Punchestown Grade 1 novice chase winner Another Promise.

Blue Bresil sired his second Grade 1 winner when his daughter L'Autonomie made light work of the opposition in the Prix Renaud du Vivier Hurdle for four-year-olds at Auteuil on Sunday, with Mick Jazz his other winner at the highest level.

The son of Spadoun will follow in the steps of Malinas in relocating from Yorton Farm to Glenview Stud ahead of the 2020 breeding season.

The Beeches Stud in County Waterford will offer a rather unique lot on Wednesday when it sends a Flemensfirth full-sister to black-type jumpers Noble Endeavor and Minella Daddy into the ring.

What makes the January-foaled filly (lot 818) so unusual is that she is the last of 13 consecutive foals by Flemensfirth out of the Old Vic mare Old Moon, whose first rendezvous with the son of Alleged was for her maiden cover in 2004.

Her regular suitor must not have been too pleased when she had a liaison with his five-year-old studmate Wings Of Eagles earlier this year.

FIRST PUBLISHED 7:14PM, NOV 12 2019
He's got a wonderful temperament and had to put up with an awful lot of showing today