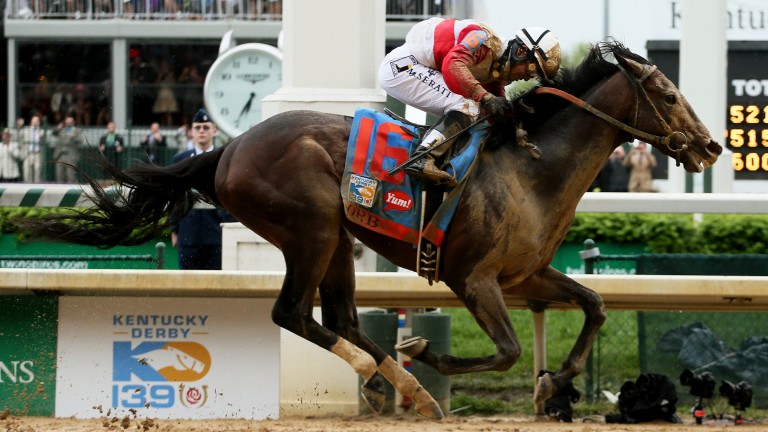 Orb: 2013 Kentucky Derby winner will transfer to Haras Cuatro Piedras in Uruguay
Travis Lindquist/Getty Images
1 of 1
By Eric Mitchell of Bloodhorse 11:11AM, APR 9 2021

Orb, an 11-year-old son of Malibu Moon, will stand at Haras Cuatro Piedras in Canelones in a deal brokered by Marette Farrell and Angelillo along with David Seguias.

A homebred for Stuart Janney and Phipps Stable, Orb is out of the Unbridled mare Lady Liberty, whose tail-female line includes multiple Grade 2 winner Mesabi Maiden, multiple stakes winner Steel Maiden, and multiple Graded producer Laughter, who is a half-sister to US champion Ruffian.

Orb won the Fountain of Youth Stakes and Florida Derby on his way to wearing the blanket of roses. He would later finish third in the Belmont and Travers Stakes and retired with five wins from 12 starts and earnings of $2,612,516.

Having entered stud at Claiborne Farm in 2014, Orb has sired 157 winners and eight black-type winners to date including Grade 1 winner Sippican Harbor. He has been represented this year by O Besos, who closed for third in the Louisiana Derby.

"With Orb, for the first time, there is a very well-balanced union in which no partner exceeds 10 per cent. We believe this is a first step on a path that definitely leads in the right direction," said bloodstock agent Sebastian Angelillo.

"Uruguayan breeders have been trying to improve the industry and doing things in the last few years, first with the arrival of Overanalyze on shuttle and then sending mares to be bred on different countries in the region, supported by the breeders' association."

"Orb was a wonderful horse with a great pedigree and look about him. He gave me many thrills, the ultimate one being his win in the Kentucky Derby. I am sure he will do very well as a stallion in his new home," said trainer Shug McGaughey.

Farrell added: "They are thrilled to secure a Kentucky Derby winner for Uruguay from Ruffian's family. This is a core international Phipps pedigree loaded with strong South American connections like Uruguayan champion two-year-old and three-year-old filly Algecira Fever, and multiple Group 1-placed winner Siempre En Mi Mente, along with Suggestive Boy who was a four-time Group 1 winner in Argentina and then won the Frank E. Kilroe Mile Stakes in the US.

"We wish him all the best and firmly believe he will establish himself as the top stallion down there."

FIRST PUBLISHED 11:11AM, APR 9 2021
We wish him all the best and firmly believe he will establish himself as the top stallion down there