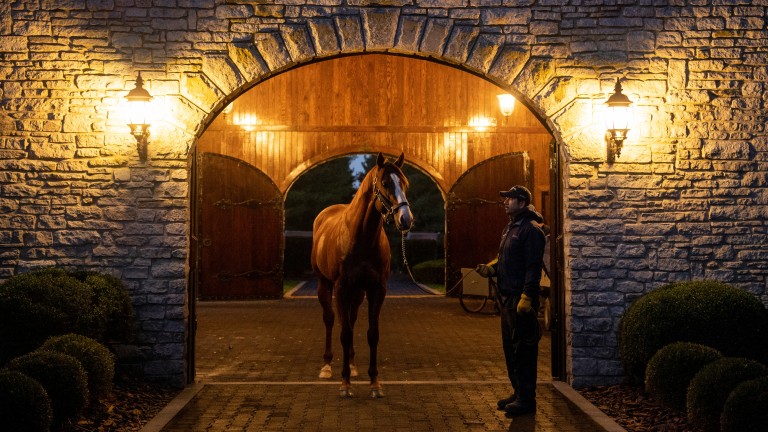 Coolmore Australia have announced the fees for their 2019 stallion roster, which includes US Triple Crown winner Justify among a trio of new recruits.

Unbeaten in six starts, the son of Scat Daddy - who is currently standing at Coolmore’s Ashford base in Kentucky for $150,000 - has been listed at a private fee for his first southern hemisphere breeding season.

He will be joined by fellow shuttler Saxon Warrior, who won the Racing Post Trophy at two prior to capturing the 2,000 Guineas as a three-year-old, and UAE Derby victor Mendelssohn at the global breeding giant’s Jerrys Plains property this year.

Saxon Warrior is currently standing at Coolmore Stud in Ireland for a fee of €30,000 and he will commence his Australian duties at A$24,750, while Mendelssohn has been introduced at A$17,600 (inc GST).

Fastnet Rock, who has stood at a private fee for the last five Australian breeding seasons, is now listed at A$165,000 (inc GST) - the highest fee on the 15-strong roster. He was responsible for the second highest-priced lot at last week’s Inglis Australian Easter Yearling Sale when Aquis Farm went to A$2.3 million for a Segenhoe Stud-consigned brother to Merchant Navy.

Merchant Navy will himself stand for an unchanged fee of A$55,000 this year, while American Pharoah - who sired his first winner with his first runner when the Aidan O’Brien-trained Monarch Of Egypt won at Naas on Saturday - also remains unchanged at A$66,000 (inc GST).

In regard to fee movements, first season sire Rubick, who numbers Todman Stakes scorer Yes Yes Yes among his eight individual winners, has seen his fee increased to A$38,500 (inc GST) from A$17,600.

No Nay Never, who produced Middle Park Stakes winner Ten Sovereigns from his first crop of northern hemisphere runners, will not return for a fourth southern hemisphere breeding season having covered 98 mares at a fee of A$19,250 last year.

Neither will Starspangledbanner, who also covered 98 mares for a fee of A$11,000. He is currently standing for a fee of €17,500 at Coolmore Stud in Ireland.

Leading Northern Irish breeder Brian Kennedy dies aged 77 Go behind the scenes at Lord and Lady Lloyd Webber's Watership Down Stud Premature death of Arrogate leaves an almighty hole in Juddmonte's US roster First-season sire Mehmas making up for lost time with quick-fire double David Futter: 'I wouldn't swap any of our stallions as this is a long game' Dream And Do success keeps budget breeders dreaming of Classic success