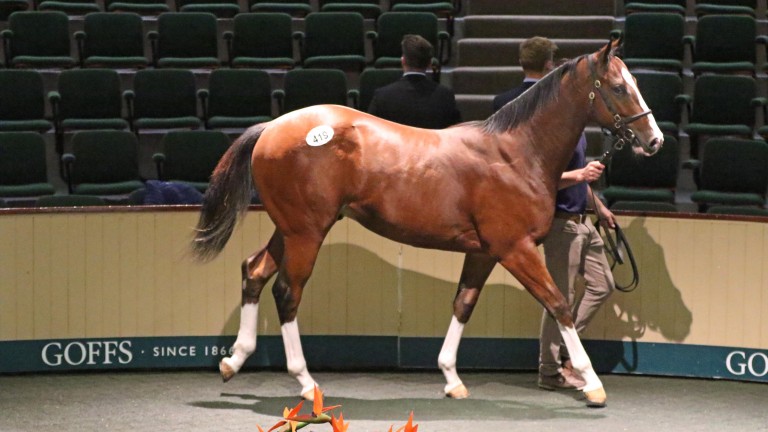 Prices may not have been on a par with the record-breaking levels set during the flagship Orby Sale, but a bustling buying bench ensured a fair level of trade during Thursday's Goffs Sportsman's Sale.

Goffs group chief executive Henry Beeby said: "After the historic events of the last two days our Sportsman’s Sale was always going to struggle to compete for headlines. However we have enjoyed a trade that, relatively speaking, has been solid if unspectacular.

"Given the backdrop leading in to the week we have been satisfied with a day that has returned an acceptable clearance rate of 85 per cent which clearly demonstrates a healthy interest from a large group of buyers from home and abroad.

"Indeed we have been delighted to welcome some significant buyers from across Europe and the Eastern Block following more hard work by the Goffs international network of agents alongside our friends at Irish Thoroughbred Marketing. Equally gratifying has been the fresh faces from the British training ranks that have flown in specifically for today.

"As ever we are supremely grateful for the support of our vendors and wish every buyer success on the racecourse."

The most expensive lot to pass through the ring went the way of Roger Marley, with the Church Farm man going to €90,000 for a colt by flying freshman sire Bungle Inthejungle offered by Rathasker Stud.

The youngster brought a noteworthy update to the Goffs ring, with his Gregorian half-brother Aloysius Lilius – who sold for €46,000 at last year's Sportsman's Sale – having opened his account since the catalogue's publication.

"He was bought to go breezing and I thought he was the nicest colt in today's sale," said Marley. "The sire has done very well with his first runners and the mare's first foal is a winner now too."

Bungle Inthejungle has made a blistering start with his debut crop of two-year-olds, with his 24 successful sons and daughters making him the season's leading freshman by volume of winners. 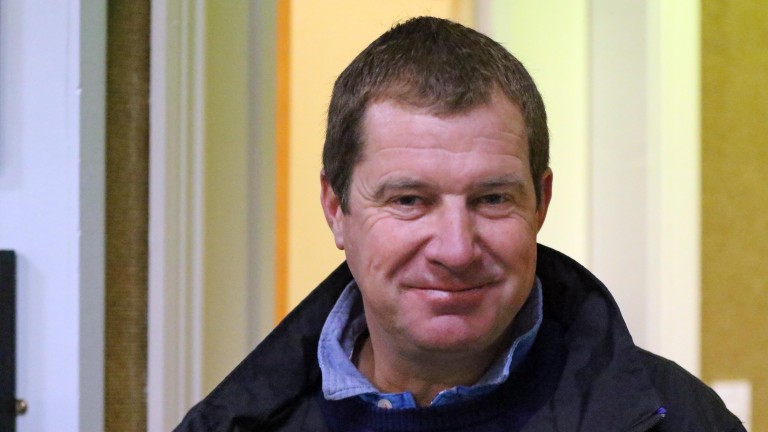 Despite his session-topping purchase, Marley said he was planning on tightening his numbers ahead of next year's breeze-up sales after this year's market had proved particularly unforgiving.

"We have eight bought for breezing," he said. "We're cutting back; we had 20 this year and hope to have about a dozen next year. The market is too flooded and there needs to be fewer numbers, so we're trying to aim at better pedigrees and better individuals and go for the better sales.

"We bought three on Wednesday. The market has been very strong this week, but then the pedigrees are here and that brought all the international buyers."

Another buyer who dug deep to secure a member of Bungle Inthejungle's second crop was Joe Foley, who went to €65,000 for a filly offered by Newlands House Stud on behalf of Clipper Logistics. 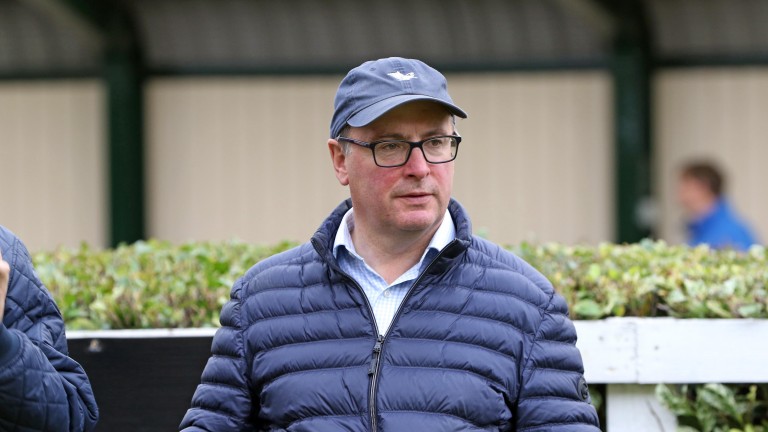 "She's a very nice filly out of a Cadeaux Genereux mare whose first foal's a good one," said Foley with a nod to the useful Yogi's Girl.

"The sire has done well from his first crop - this is the first I've bought by him. She'll come home to Ballyhane and join the team of yearlings for Clipper Logistics and we'll have a look at her in January and decide on a trainer."

Foley was another to sing the praises of Goffs for putting on such a successful sale, saying: "It's been very strong and Goffs have done a great job getting people here. The good horses have stood out and made a premium. It's been a terrific week's trading and that's continued into today."

The leading spender during Thursday's session was Kevin Ross, who spent a six-figure sum bolstering the string of owners Paul and Clare Rooney.

Their purchases were headed by a €70,000 colt from the final crop of the ill-fated Society Rock, sire of recent Renaissance Stakes winner Unfortunately and narrow Cheveley Park Stakes runner-up The Mackem Bullet.

"The sire speaks for himself and he's a nice, hardy looking two-year-old type of colt," Ross said of the Tally-Ho Stud-consigned yearling. "He was just about our pick of the day." 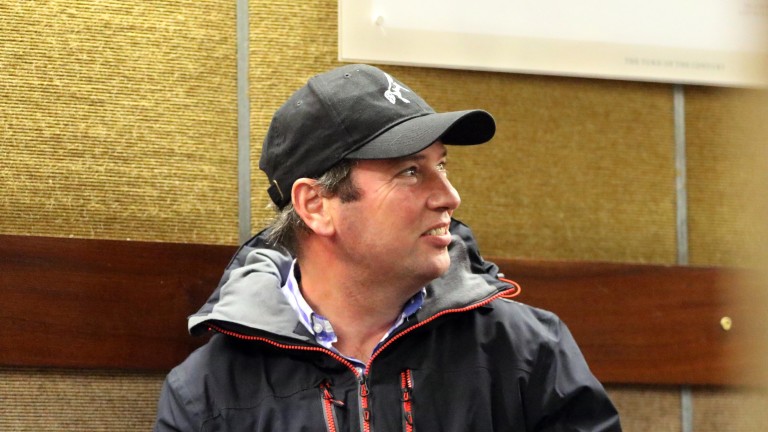 Just two lots earlier Ross had gone to €55,000 for a Champs Elysees colt offered by Goffs chairman Eimear Mulhern's Abbeville Stud. The colt is out of a placed daughter of Prix du Cadran winner Mercalle.

"He's a lovely horse, a great individual with loads of presence," said Ross. "We bought Paul and Clare [Rooney] a nice Champs Elysees last year called Getchagetchagetcha, he's rated around 100 now, and this mare is one from one too." 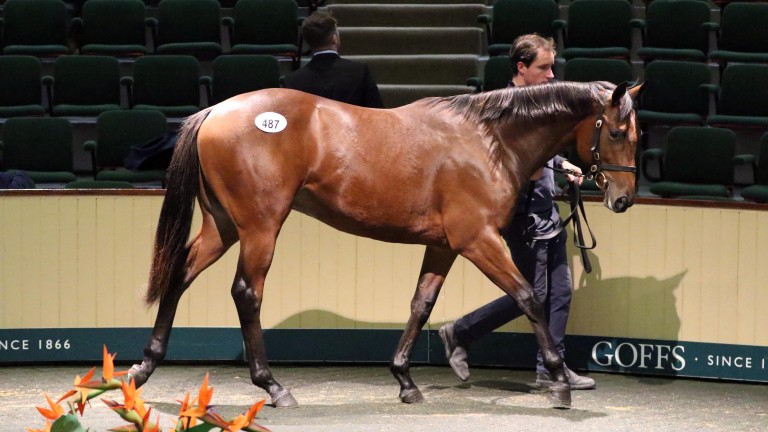 "The yearlings will be allocated trainers around Christmas time," added the agent. "Before then they'll go Richie McGrath's place in Middleham and be broken in."

Quinn on the fox hunt

Talented juvenile filly Signora Cabello, winner of the Queen Mary Stakes and Prix Robert Papin, has ensured that John Quinn has had plenty to cheer about this year, and the Malton-based trainer looks to have another bright prospect on his hands after going to €54,000 for a Kodiac filly during Thursday's session.

The filly, offered by River Downs Stud on behalf of Gillian Proctor's Foxland Stud, is out of the Listed-winning Medecis mare Duchess Of Foxland, who has produced three useful winners from three runners.

"We really liked her," said Quinn. "She looks a runner and is very racy. She's by a great stallion, the mare's been a good producer and she comes from a very good breeder, so let's hope she's the next one. 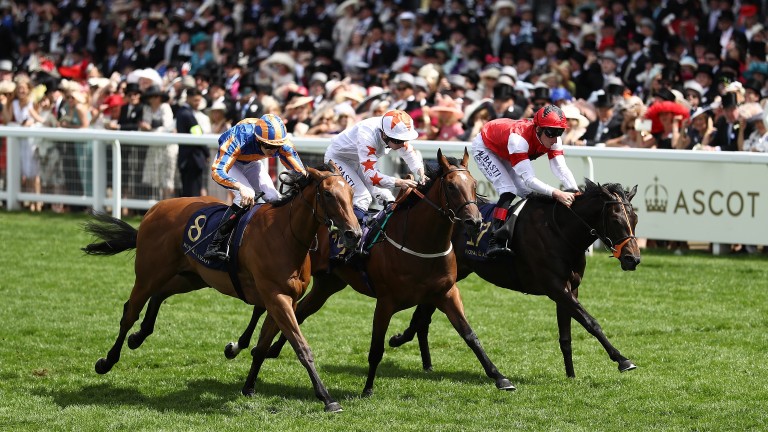 "It's tough trade today but we thought she was well worth what we gave for her," added Quinn.

Duchess Of Foxland has a colt foal by Vadamos and was covered by Mehmas earlier this year.

Perseverance pays off for O'Ryan

Bobby O'Ryan and Keith Dalgleish were also busy restocking for next season, signing for six lots at a total outlay of €187,000. Among those purchases was a Zebedee colt offered by Lynn Lodge Stud.

"I loved his action and I've been lucky with the sire before," said O'Ryan. "He's a lovely horse."

Having faced plenty of competition in the ring O'Ryan said he had found the three days of selling something of a challenge. However, results from across Europe had still given the agent plenty of cause for celebration.

"I had my 102nd winner of the year yesterday, a Group 3 in Germany with a horse I bought for €4,500 [Va Bank]," he said. "So it's been good week on the racecourse even if I've struggled to buy horses here.

"Fair play to Goffs and the vendors, they put a great team of horses together, as did Irish Thoroughbred Marketing getting all the right people in. There's been an unbelievable buzz around the place this week."

FIRST PUBLISHED 8:59PM, OCT 4 2018
The market is too flooded and there needs to be fewer numbers, so we're trying to aim at better pedigrees and better individuals