Michele MacDonald on a session of big spending in Kentucky 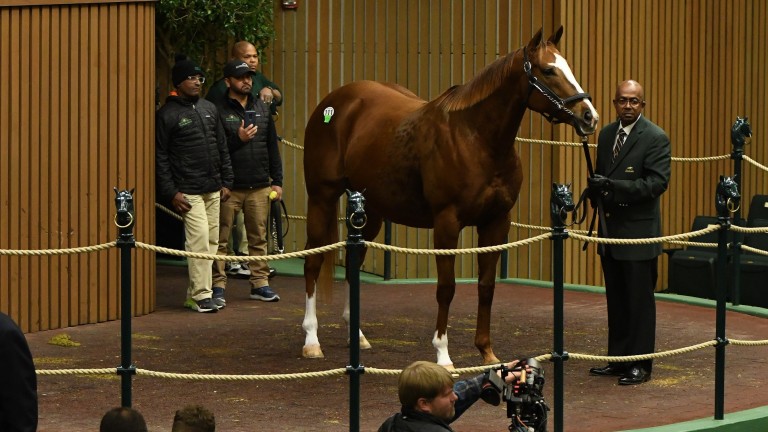 Take Charge Brandi was the centre of attention as hip 111
Keeneland Photo
1 of 1
By Michele MacDonald UPDATED 1:58PM, NOV 7 2019

For the second time in her young life, champion Take Charge Brandi lit up the board at the Keeneland November sale, topping Wednesday’s single-session Book 1 action on a bid of $3.2 million from John Sikura of Hill ‘n’ Dale Farms.

Four years ago, Sikura signed a $6m ticket for the flashy chestnut daughter of Giant’s Causeway, acquiring her at that time as a broodmare prospect for the Elevage partnership that included Glen Hill Farm as well as Hill ‘n’ Dale.

Now in foal to Triple Crown winner Justify, Take Charge Brandi was sold, along with seven other mares and five weanlings, to disperse the Elevage holdings other than combined investments in stallions such as Curlin and Kitten’s Joy.

"The best way to determine real market value is to bring them to the market," said Sikura, who ended up buying two of the Elevage mares and two weanlings for a session-leading total of $4.8m, while Craig Bernick of Glen Hill signed for a pair of weanlings and one mare for a combined $1.7m.

Altogether, the 13 horses sold by Elevage generated $11.7m, equal to 16.6 per cent of the session turnover. Average price for members of this exclusive group was $900,000.

While Take Charge Brandi glittered as Keeneland’s star of the day, 14 mares each brought more than $1m in what was a continuation of the strong trade for top offerings displayed at the previous evening’s Fasig-Tipton sale, when 18 horses hit the seven-figure milestone.

Of the individuals that sparked Keeneland fireworks, three of the top five emerged from the Elevage dispersal, which were consigned by Hill ‘n’ Dale.

The decision by Sikura and Bernick to sell the Elevage horses at Keeneland made a substantial difference in the session. Bernick indicated some members of his family were not as willing to continue to invest in mares and young stock as they were to concentrate on stallion shares, as original plans had proposed.

“My family is in Chicago and they’re very comfortable with the stallion business because it’s easy to predict earnings and things like that,” Bernick said.

While Sikura said he did not feel the time was ideal to sell, mostly because the partnership’s young mares had not been given the time to see what they could produce, he agreed to bring the group to market and return to the original stallion-oriented strategy with Elevage.

"It’s kind of like how good is the half-baked cake going to taste? It’s not ready yet," Sikura said, pointing out as an example that while Take Charge Brandi has produced three foals to date, the oldest is an unraced juvenile colt by Curlin.

“But I understood and agreed with their philosophy that let’s stick to our core purpose," he said, adding that there is no discord between the partners. "These are mares that I have handpicked and I really think that one or more is going to be a really important mare.”

Take Charge Brandi’s pedigree has improved since her initial sale; her half-brother Omaha Beach has become a Grade 1 winner and highly regarded stallion prospect and another half-brother, Courage Under Fire, was Group 1-placed.

Sikura noted that Take Charge Brandi’s second dam, 2014 Broodmare of the Year Take Charge Lady, is no longer producing foals, and that her dam, Charming, is owned by Coolmore. Thus, the ability to gain access to the high-quality family is limited.

"For me, to collect fillies from that family is a great opportunity and I have a long-term view,” he said. “The commercial aspect is part of what I do, but I’m trying to cultivate and develop female families and create (horses) of significance. So, when you get that opportunity, there is less concern about what they bring and more concern about having access and opportunity to buy mares that we hope that can be important and breed-changing long term.

"I wear a couple of different hats: commercial, short-term, long-term, develop families. I think there’s a great opportunity in these Elevage mares," he continued. "(Some of them) have three foals on the ground and nearly $1 million in stud fees paid and if one of (the foals) runs, these mares are pretty remarkable and unique." 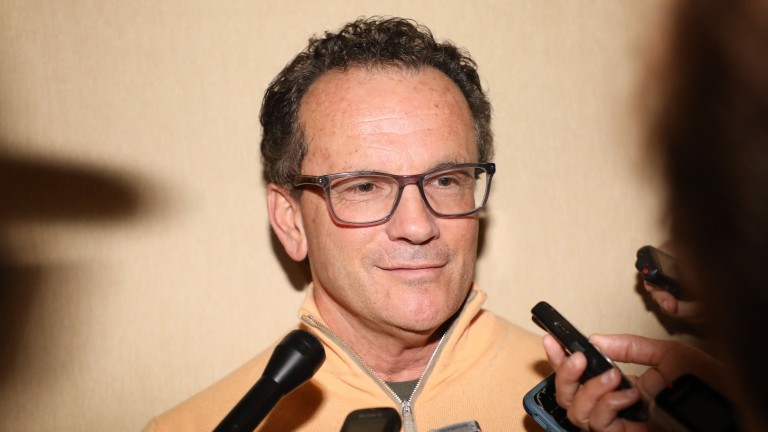 Take Charge Brandi has produced yearling and weanling colts by Tapit in addition to her son by Curlin, and Sikura paid $600,000 to retain the weanling, which he said could be sold as a yearling. Hill ‘n’ Dale had already owned a 50 per cent interest in Take Charge Brandi, he disclosed.

The other mare Sikura selected from the group was Cassatt, an eight-year-old daughter of Tapit from the family of Kitten’s Joy and fellow champion Dreaming Of Anna. Elevage initially paid $2.5m for Cassatt in 2016, but Hill ‘n’ Dale secured her for $600,000; she was listed as not pregnant.

In other action at the top of the Keeneland marketplace, representatives of Japan’s Shadai and Northern Farms, owned by brothers Teruya and Katsumi Yoshida, respectively, were formidable on those mares they particularly desired.

"This mare is fantastic—very, very good,” exclaimed Teruya Yoshida’s son Tetsuya, who had been on the telephone with his father while bidding for Eskimo Kisses, their top pick of the sale.

Shunsuke Yoshida, leading the Northern Farm team on behalf of his father, Katsumi Yoshida, said he had previously tried to buy Callback when Elevage purchased her for $2.8m in 2015.

"I loved her very much but didn’t get her then. But this time we got her,” Shunsuke Yoshida said.

Together, Teruya and Katsumi Yoshida have bought 12 horses during the Fasig-Tipton sale and Keeneland’s Book 1 session for a grand total of $14.05m, continuing what has been a profitable policy of acquiring top mares internationally and later breeding them to their own stallions in Japan. Resulting foals have gone on to be top sellers commercially as well as outstanding runners.

Their younger brother, Haruya Yoshida, bought two mares at Keeneland for a total of $1.4m.

Among domestic buyers at Keeneland, Jane Lyon of Summer Wind Farm purchased 12-year-old Lil Indy, the dam of Grade 1 winner Maximum Security, paying $1.85m for the daughter of Anasheed and half sister to multiple Grade 1 winner Flat Out. Lil Indy is in foal to Quality Road.

Lyon also bought Gloryzapper, a seven-year-old Grade 3 winner by Ghostzapper, paying $1.5 million for the mare who is in foal to Tapit. Both of Lyon’s purchases were among the top six highest-priced offerings at Keeneland.

“Every one of my advisors was very excited about this mare and they put her at the top of my list,” Lyon said of Lil Indy, who completed an unusual saga after being sold at Keeneland last November for only $11,000 and exported to South Korea.

When Maximum Security flashed his talent in winning the Florida Derby this spring, SF Bloodstock was able to acquire Lil Indy and bring her back to the United States. She was bred to Quality Road not long after her son crossed the finish line first in the Kentucky Derby prior to being disqualified for veering into the stretch.

Other buyers of seven-figure mares at Keeneland included:

FIRST PUBLISHED 9:34AM, NOV 7 2019
For me, to collect fillies from that family is a great opportunity and I have a long-term view