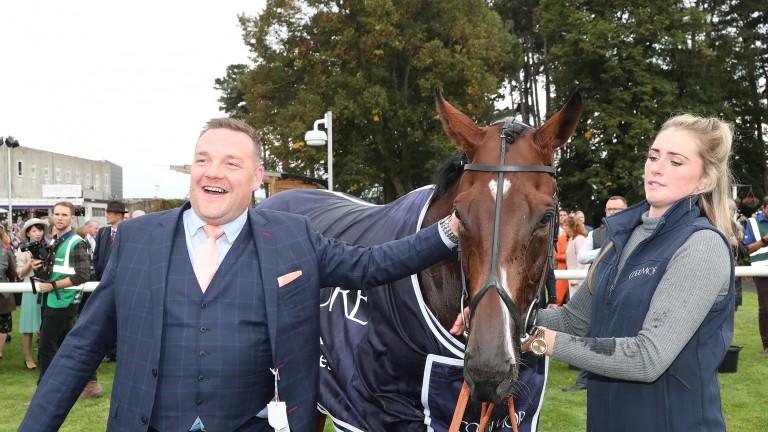 John Dance and Lucy Burke with Laurens after her Matron Stakes victory
CAROLINE NORRIS
1 of 1
By Martin Stevens 3:30PM, NOV 26 2019

John Dance has appointed No Nay Never as the first stallion to cover his newly retired wonder filly Laurens next year.

Laurens, a daughter of Siyouni purchased by Dance for £220,000 at the Goffs UK Premier Yearling Sale, was sent out by Karl Burke to win eight of her 17 starts, including six strikes at the highest level.

Her Group 1 spree took in the Fillies' Mile at two, the Prix Saint-Alary, Prix de Diane, Matron Stakes and Sun Chariot Stakes at three and the Prix Rothschild at four.

She won legions of fans for her brave front running and tremendous battling qualities, and also finished second in the 1,000 Guineas and Lockinge Stakes.

No Nay Never, her first suitor, is a precocious son of Scat Daddy who landed the Norfolk Stakes and Prix Morny in his racecourse pomp.

He has got off to a fine start as a stallion with his first two crops yielding 18 stakes winners in Europe including Middle Park and July Cup hero Ten Sovereigns, as well as Group 2 scorers Arizona, Chestnut Honey, Land Force, Mystery Power and Shadn.

Such success has prompted Coolmore to increase his fee to €150,000 for the 2020 breeding season.

John Dance explained his decision by saying: “While we felt Laurens had an especially high cruising speed, what she lacked if anything was a quicker turn of foot.

“As we keep both the fillies and first colts that we breed we were looking to breed a racehorse rather than a commercially attractive sales horse as her first would be kept regardless of what she produced.

“Thus we ruled out the obvious choices of Dubawi and Galileo as, while they would be clearly but needlessly sales attractive, they didn’t typically inject the dynamic we were looking for.

“We looked at quicker stallions who typically produced quicker offspring and after considerable deliberation over various possibilities we eventually agreed on No Nay Never for her first cover.”

No Nay Never looks set to cover a star-studded book next year, as he has also been slated to receive Coolmore's homebred multiple Group 1 winners Hermosa and Magical in their first season in retirement.

FIRST PUBLISHED 3:30PM, NOV 26 2019
While we felt Laurens had an especially high cruising speed, what she lacked if anything was a quicker turn of foot