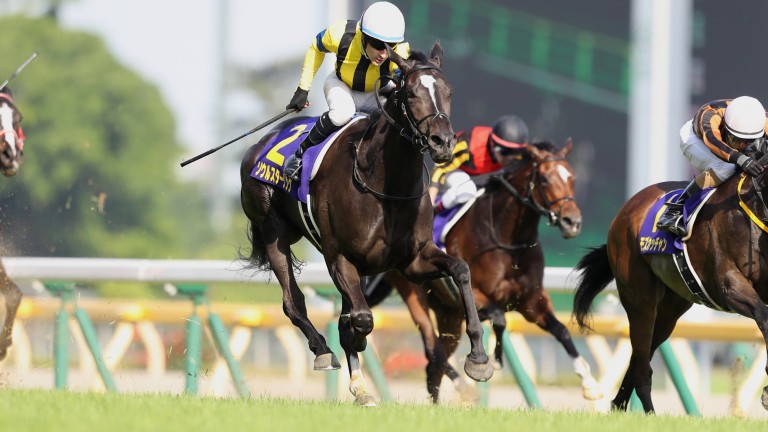 Soul Stirring (left): Japanese Oaks-winning daughter of Frankel has produced her first foal
1 of 1
By Kitty Trice 10:50AM, APR 20 2021

The daughter of Frankel was bred by Shadai Farm's Teruya Yoshida and is the second foal out of the brilliant multiple Group 1 winner Stacelita.

Stacelita won four Group 1s in France for Jean-Claude Rouget - including the Prix de Diane and Prix Vermeille - in addition to two top-level contests in the United States for Chad Brown. She was sent from the US to England and was covered by Frankel in 2013 before flying back to Japan and giving birth to Soul Stirring.

Trained by Kazuo Fujisawa, Soul Stirring became the first Grade 1 winner for Frankel when winning the Hanshin Juvenile Fillies in December 2016 for Shadai Race Horse. She subsequently won the Japanese Oaks the following May.

The seven-year-old is one of three top-level winners for the Banstead Manor Stud resident in Japan with Mozu Ascot striking on turf and dirt before retiring to Arrow Stud, while Grenadier Guards won the Asahi Hai Futurity in December.

Soul Stirring retired to join the Shadai broodmare band in 2020 and visited Bricks And Mortar, a multiple Grade 1-winning son of Giant's Causeway and the 2019 American Horse of the Year.

Bricks And Mortar - who was bred by George Strawbridge and  landed the Pegasus World Cup and Arlington Million from the globetrotting Magic Wand - joined the Shadai Stallion Station roster last year and covered 178 mares his first season for a fee of ¥6 million (£39,000).

Stacelita, who is now back at Newmarket, has a two-year-old full-sister to Soul Stirring named Stunning Star. She produced a colt by Frankel this year.

No stopping Micky Cleere as next breeze-up date approaches

FIRST PUBLISHED 10:50AM, APR 20 2021
Soul Stirring retired to join the Shadai broodmare band in 2020 and visited Bricks And Mortar