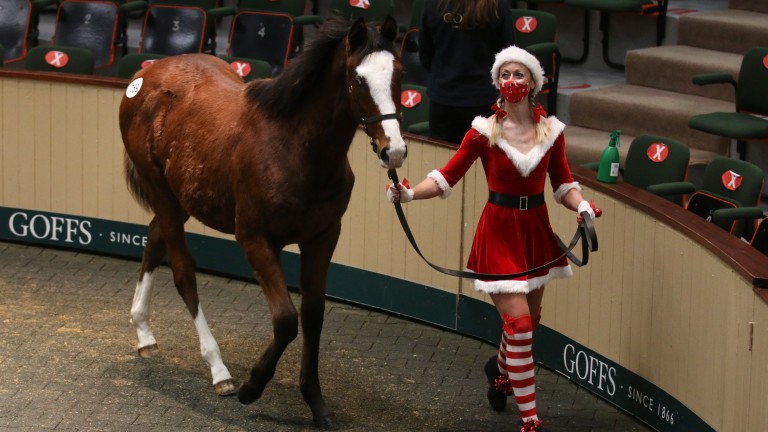 A little Christmas magic was sprinkled on the Goffs sales complex on Sunday night with a special appearance from Mrs Claus, who led the final lot of the November Foal Sale around the ring.

Goffs' own Mrs Claus was in fact familiar sales scene figure Brenda Shortt, who said she has been overwhelmed by the support of her fundraising venture, which has raised more than €6,000 for mental health charities.

"I've been blown away by the donations and the generosity of people, it’s fantastic," she said. "Everyone was smiling and enjoying it, so I accomplished what I set out to do, which was to make people forget about their troubles for a few minutes."

The sales community has rallied behind Shortt’s efforts as she has received support, assistance and plenty of donations in her efforts to raise much needed funds, with Goffs group chief executive Henry Beeby doing his bit by donning a Santa Claus hat and mask while on auctioneering duty.

"I want to say a huge thank you to Henry Beeby, who really got into character in his Santa hat and beard, and the team at Goffs for all their support facilitating the fundraiser and their generous donation," said Shortt. 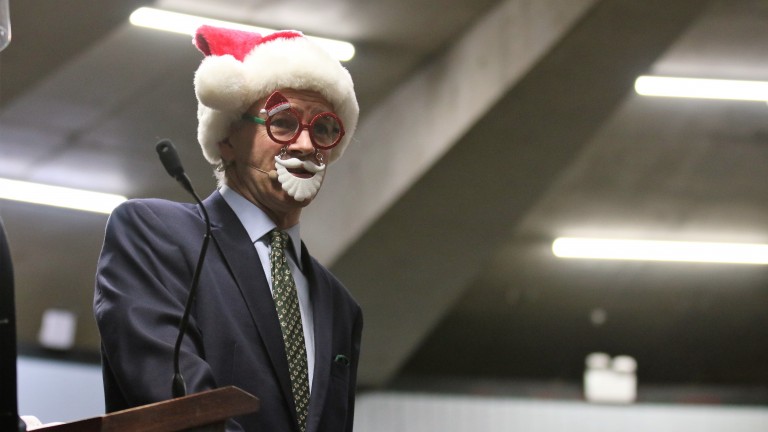 Henry Beeby dons a Santa Claus mask on the Goffs rostrum
Goffs
"I would also like to thank Laragh de Burgh, who made a brilliant video, Nicola Kent for her help and support and Harriet Jellett, who provided a beautiful red coat for me."

There was a real buzz around the Goffs complex as the sale drew to a close and word of Shortt’s appearance spread.

Lot 759 created a talking point of his own as the attractive Dark Angel full-brother to Group 3 Prix des Chenes winner Stage Magic, who bore more than a passing resemblance to his dam’s half-brother, the Grade 1 Breeders’ Cup Turf winner Talismanic, was the subject of much interest.

That the McEnery family of Vinesgrove Stud recorded such a good sale meant a huge amount to Shortt, who expressed her gratitude for their support in her fundraising efforts.

"I was thrilled for Billy and his staff at Vinesgrove, who do such a good job," she said. "He was a lovely foal and I was delighted to see him sell so well to the O’Callaghans.

"I went down to see him in his stable wearing the outfit because I knew it would be unlike anything he had seen before! He was great, he never batted an eyelid, so he has a fantastic temperament too."

The GoFundMe page will remain open until the end of the year and donations can be made here.

FIRST PUBLISHED 4:23PM, DEC 21 2020
I want to say a huge thank you to Henry Beeby, who really got into character in his Santa hat and beard