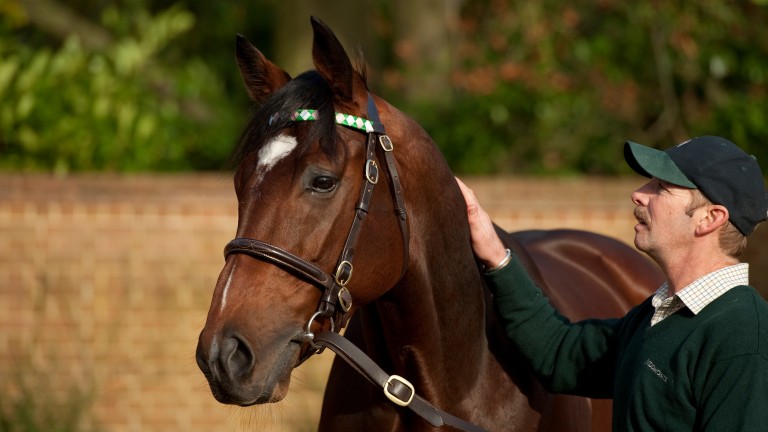 Frankel receives a reassuring pat from Rob Bowley shortly after his arrival at Banstead Manor Stud in 2012
Edward Whitaker
1 of 1
UPDATED 3:17PM, FEB 27 2019

There is a stark juxtaposition between the giant frame of Frankel, a towering talent of the turf, and the quiet, unassuming figure of his doting handler, Rob Bowley.

Nevertheless, Bowley has been ever-present by the world champion's side since he arrived at Juddmonte's Banstead Manor Stud to begin his second career at the end of 2012. The pair have built up a symbiotic relationship, with Bowley the deft touch to Frankel's brute force, his carefully honed approach to horsemanship central in harnessing the 11-year-old's animal instincts.

It is a position of enormous prestige and – given Frankel's immense value – arguably even greater responsibility. It is not a role that Bowley takes lightly.

"I never take him for granted because to look after him is just such a privilege," he says proudly. "We've built up a great relationship, he knows me and I know him intimately, I know all his little quirks. He's very bright and notices everything that goes on, he's highly intelligent and very laid back.

"I'm always aware of him. If I've got a day off or something like that I'll think about him and wonder how he's getting on and if everything is okay.

"We all still watch his races," he adds as he gestures towards his Banstead Manor colleagues out in the pristine stallion yard. "And they still make the hairs on the back of my neck stand on end." 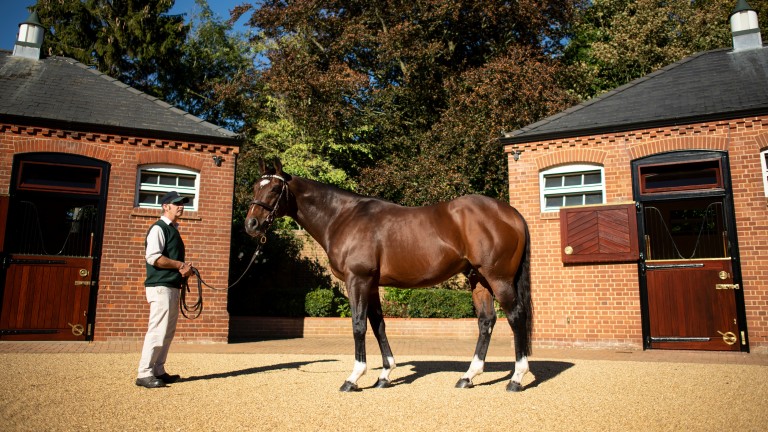 Stallion man Rob Bowley with Frankel at Juddmonte's Banstead Manor Stud
Edward Whitaker
Words tumble enthusiastically from Bowley when Frankel – or 'Bobby', as he often refers to him – is the subject of discussion, and he is acutely aware of the horse's position in the pantheon of greats.

But, as a master of his craft, the sprightly 60-year-old has the wits and wherewithal to recognise there is no space for the starstruck when it comes to handling highly charged stallions.

"They're big beasts and they know what they want, and down at the covering barn anything can happen, so you've got to be on your toes," he says. "You've got to be aware of the fact that they're stallions.

"If I looked at Frankel as the highest-rated horse ever, the greatest horse to have ever run on turf, I'd freeze. I wouldn't be able to walk him out for thinking 'oh my god, what if he stumbles?', so you can't think like that. I've just got to treat him the same as I do my other horse, Oasis Dream."

February signals the beginning of the breeding season, the busiest time of year for stallions and their handlers. But – despite the workload, with some stallions performing three covers a day – Bowley says it's a period he looks forward to.

"Their temperament changes once they realise what's going on," he says, before explaining that Frankel, who will stand his seventh term at a fee of £175,000, is now the consummate professional in the breeding shed.

"Once we start walking in January and introduce them to mares on the stud they know things are happening. With Bobby, he's a big powerful horse, but it's like walking down the high street taking him down to the covering barn.

"He just ambles down there, he doesn't bite, he doesn't pull you about to get to the mare, he's a total professional. He might have the odd shout if there's food coming and he can hear buckets rattling, but that's about it."

The result of those strolls down to the covering shed have shown that Frankel's talent is being passed on in spades. He has sired five elite winners from just two full crops of three-year-olds, and reached 20 northern hemisphere Group winners faster than any other European stallion in the history of the Pattern. 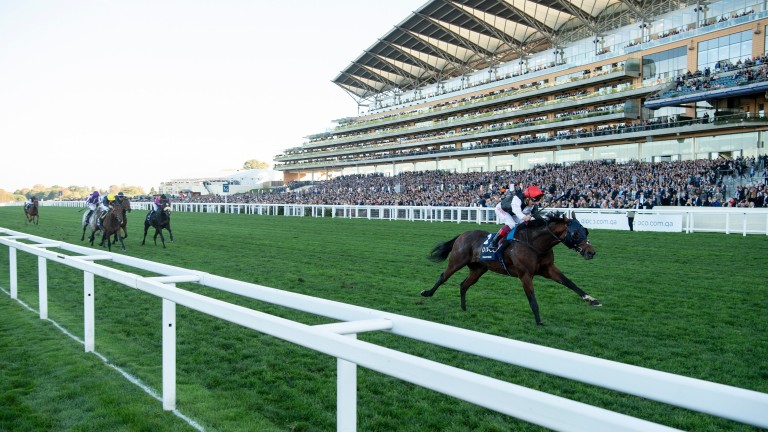 Cracksman, one of five elite winners by Frankel, lands the Champion Stakes at Ascot
Edward Whitaker
Among those numbers is Cracksman, the horse who jointly topped the 2018 Longines World's Best Racehorse Rankings with Winx.

Regardless of the fact that Frankel was granted outstanding opportunities at stud, it requires an unhealthy degree of cynicism to claim that his stallion career has got off on anything other than a positive note.

There are few limits to the heights Frankel's progeny can reach, but there is no doubt that Bowley, who has enjoyed a varied career in the racing and breeding industry, considers working with the son of Galileo his own magnum opus.

Upon leaving school Bowley served his apprenticeship at the Newmarket stable of Bruce Hobbs, for whom he had a handful of rides before he joined Guy Harwood during the days of another mighty Khalid Abdullah colour bearer, Dancing Brave.

"I was there in '86, when Dancing Brave was there, Bakharoff, Sadeem, Phardante," recalls Bowley. "Dancing Brave was an amazing horse, I didn't look after him but I was lucky enough to ride work with him. Seeing him quicken away from you by 15 lengths was fantastic."

His first job with stallions came at Woodditton Stud – now one of many Darley-owned properties in Newmarket – where he worked with Superlative and Sayf El Arab. After a brief spell at Darley, Bowley joined Juddmonte as a groom in the August of 1999 and was promoted to stallion man a year and a half later.

It was towards the conclusion of 2012 when Bowley was looking after Oasis Dream and Zamindar that stud director Simon Mockridge approached him about taking on arguably the most famous horse to retire to stud anywhere in the world.

"We didn't know what Frankel was like to handle - we'd heard stories from people saying he was hot, which he was a two-year-old," says Bowley. "They wanted someone who was a bit more experienced, so I acquired him, which was fantastic.

"Initially I didn't want to give up Zamindar. As a stallion man you build up an empathy and a relationship with your horses, but Simon told me Zamindar was going to be retired and that he'd like me to do Frankel, so that was it.

"When I picked him up from Warren Place he kicked the box all the way here because he thought he was going to the races. He was preparing himself mentally. After 48 hours he'd completely settled down though and was like a different horse.

"He's a horse that learns very quickly – he lives in the now, he doesn't mither on about something or worry about things."

Khalid Abdullah's operation currently stands five stallions at Banstead Manor Stud, with Frankel joined by the hugely promising Kingman, the redoubtable Oasis Dream, up-and-comer Bated Breath and the exciting Expert Eye. It is a fitting tribute to one of history's most accomplished breeders that all five horses were homebred by Juddmonte Farms, a fact Bowley identifies as a contributing factor in the stallions' intrinsic qualities.

"I couldn't think of a better job or a better place to work with stallions than at Juddmonte," he says. "It's hard work – believe me, especially at this time of year – but they're great horses to work with.

"I'll have been here 20 years in August and I've worked with some great stallions; the likes of Rainbow Quest – he was a real character – Zafonic, Three Valleys, Champs Elysees, Beat Hollow, Observatory. They've all got such personalities, and I think a lot of that is down to them being homebred. Frankel has that x-factor though, he knows he's special and we're very fortunate to have him."

While Bowley may have reached the very pinnacle of his chosen career, it is a harsh reality that professional accomplishment and personal contentment will not always run in tandem.

When asked what kind of impact Frankel has had, not only on his career but on his life, there is a marked change in Bowley's tone and his gaze drifts off into the distance. There are no specifics to his response, just a sense of sorrow that brings the sheer frivolity of racing into sharp relief.

"Myself and my family have had a very difficult time in the last four or five years," he says softly, "and Frankel has been a great comfort to me personally, and Oasis as well.

"It's great coming in when they have their heads over their doors looking for you. If you're down or have something on your mind, you can come to work and by the time you've started you've forgotten about it.

"I've got a great wife, three beautiful children and three grandchildren too, and without them I wouldn't be anything."

Destiny is a recurring theme throughout our conversation and Bowley speaks of being a spiritual individual, although a smile again breaks across his face as he promises that he isn't about to deliver a sermon.

"It's Frankel's destiny to be here, and it's my destiny to look after him, I was meant to be here," he says. "When I was at school and other kids had posters of bands like T Rex up on the wall, I had pictures of stallions; Be Friendly, Never Say Die, Crepello, all those old horses, so it was in my blood. I didn't know it at the time, but when I look back I think my destiny was set." 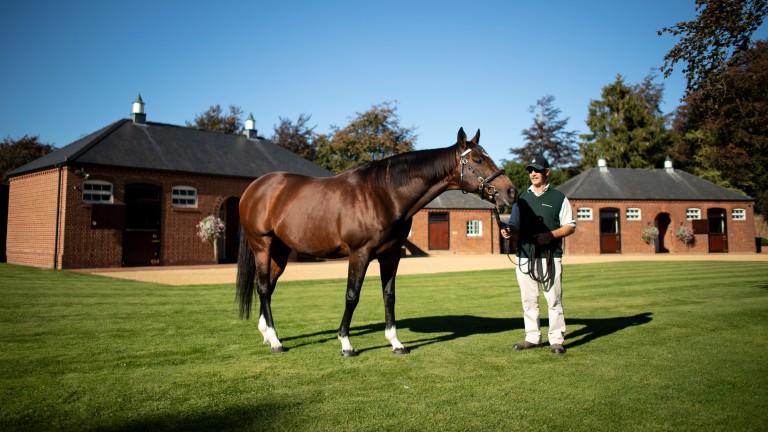 Rob Bowley on Frankel: "He knows me and I know him intimately, I know all his little quirks"
Edward Whitaker
Those in the racing and bloodstock industry are accustomed to focusing on events such as mating plans and foaling stories, sales results and racetrack success. But those flashpoints would never be reached if it wasn't for the people who do the hard yards in between.

Not that Bowley has ever sought his share of Frankel's fame, not now or at any point since late 2012. But, with his 61st birthday on the horizon, he can draw some well earned satisfaction from having played an almighty hand in writing the next chapter of one of the turf's great stories.

"Frankel could be champion sire, he's going the right way at the moment," he muses. "He's a special horse and I believe he could do anything at stud. If you don't work with him it's very difficult to understand what he's like. I'll miss him when I go, I'll miss them all.

"He'll be all right though, I can retire knowing that I've done my job."

Few, if any, stallion men have ever spent as much time in the limelight at Rob Bowley has in the process of caring for Frankel.

"Initially Simon Mockridge [stud director] said to me 'are you ready? because people are going to want to come up all the time because he's so popular'," says Bowley. "Rarely a day goes by when we're not showing him to someone in the afternoon. We've had people come up here and burst into tears, he gets birthday cards, Valentine's day cards, the lot."

Such is Frankel's celebrity status, the horse has also acquired a few famous fans of his own, with the Duchess of Cornwall, Kylie Minogue and Spandau Ballet's Steve Norman among the household names to have paid the horse a visit since he retired to stud. 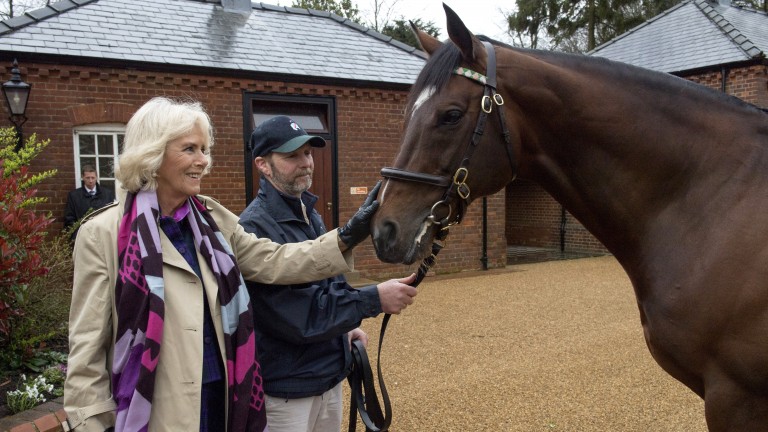 Rob Bowley introduces the Duchess of Cornwall to Frankel
Getty Images
However, Bowley says he is blissfully unaware of the impact of Frankel fever beyond the boundaries of Banstead Manor Stud.

"Frankel loves the attention – he likes sticking his tongue out at people – but I tend to take no notice," he says. "I haven't got time to watch TV or go on social media. My sole purpose is to look after those horses. I get more pleasure showing Bobby to the general public and to children as well – I get a lot of joy out of that as they appreciate him for who he is."

FIRST PUBLISHED 3:17PM, FEB 27 2019
We all still watch his races and they still make the hairs on the back of my neck stand on end