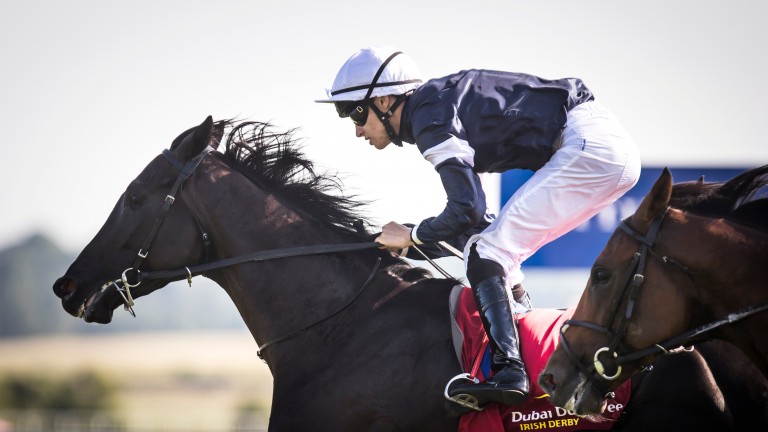 Second on his only start at two, the son of Camelot enjoyed his finest hour when repelling Rostropovich in the Irish Classic two years ago and has since run some finest efforts mostly in defeat, although he did win the Group 3 Ballyroan Stakes at Leopardstown last year.

Trained by Joseph O'Brien, the colt won three of his 18 starts and over £1,150,000 in prize-money. He is the first son of Derby winner Camelot to join the stallion ranks in Europe.

Etreham's Nicolas de Chambure said: "We are very happy to have been able to acquire Latrobe for his stallion career.

"It is important to be able to offer breeders a variety of stallions and profiles that can complement each other. The success of Poliglote, for example, has shown the importance of Derby horses which bring a little more speed and influence to the French jumping mare.

"Latrobe meets this objective for us perfectly. He is a beautiful son of Camelot, he raced at two before winning the Irish Derby at three. He has shown a great deal of courage and a very good temperament while travelling and performing abroad. We invite the breeders to come and see him at Haras de la Tuilerie."

Latrobe is out of the winning Shamardal mare Question Times and a full-brother to last year's Investec Oaks heroine Pink Dogwood. The duo are half-siblings to Diamond Fields, a Group 3-winning daughter of Fastnet Rock.

He will join Goliath Du Berlais, Masked Marvel and Saint Des Saints at Haras de la Tuilerie, and a fee will be announced at a later date.

Tapit to stand at $185,000 as Gainesway issue conservative fees

FIRST PUBLISHED 5:21PM, OCT 23 2020
It is important to be able to offer breeders a variety of stallions and profiles that can complement each other