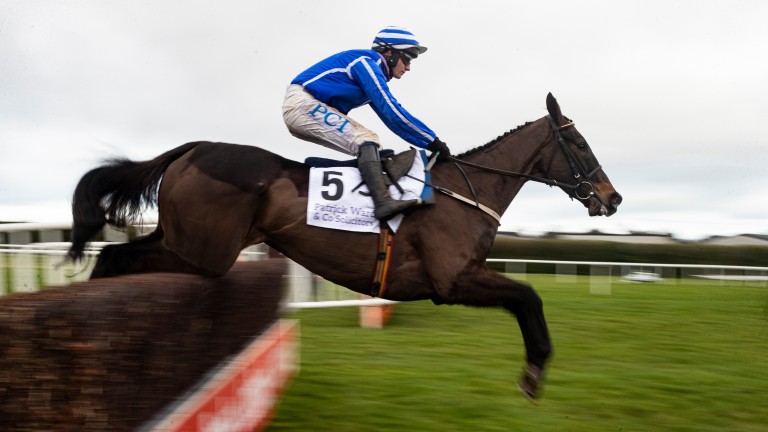 Bred in France, sold in Ireland, winner of a point at Larkhill in Wiltshire and then bought to go to Willie Mullins; there were several twists in Energumene's road from Christophe Dubourg's farm in Daumeray to the Closutton academy.

A former jump jockey turned trainer and pre-trainer, Dubourg has founded a riding dynasty through his children Pierre, Kilian, Baptiste and Earine, with the number of professional licences in the household nearly always outstripping the tally of broodmares in the paddock.

Dubourg takes evident pleasure in Energumene's success in the Arkle at Leopardstown this month, and allows himself a wry chuckle at the circumstances of his sale.

"I watched the race and it's great," says Dubourg. "It's quite a story in terms of how he came to be sold and now he's won a Grade 1. 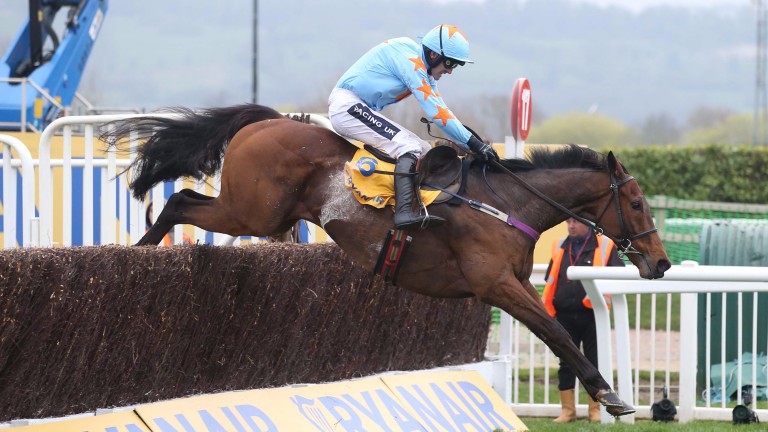 The success of Un De Sceaux raised the profile of progeny by Denham Red, who stood at Haras de la Rousselliere until his death in 2014
GROSSICK RACING PHOTOGRAPHY

"There was an agent who came to see me about buying a yearling by Denham Red, because Un De Sceaux had really made his name as a stallion.

"He looked at the yearling, and there is a paddock in front of the yard where he saw a two-year-old. He asked about the horse and I told him he was by Denham Red as well and he just fell in love with him. I told him he wasn't for sale but he wouldn't leave. I rode out two or three lots and he spent the whole morning there."

"He was two-years-old and the finished article. At six months it would have been a different matter, but as a two-year-old there was a lot of work behind him. He also bought the other yearling for the same price.

Communication may not have been straightforward between Dubourg and Peter Vaughan of Moanmore Stables, the man who just wouldn't leave.

But a shared understanding of just what a good-looking horse Energumene was, even at such a young age, seems to have bridged any language barrier.

'I just had to have him'

Vaughan picks up the story, saying: "People in France are under the illusion I'm an agent, when I'm not. I buy those horses for myself. I went to buy Favori Logique, who was the other horse. Because of Un De Sceaux I was looking to buy stock by Denham Red and they were very scarce. 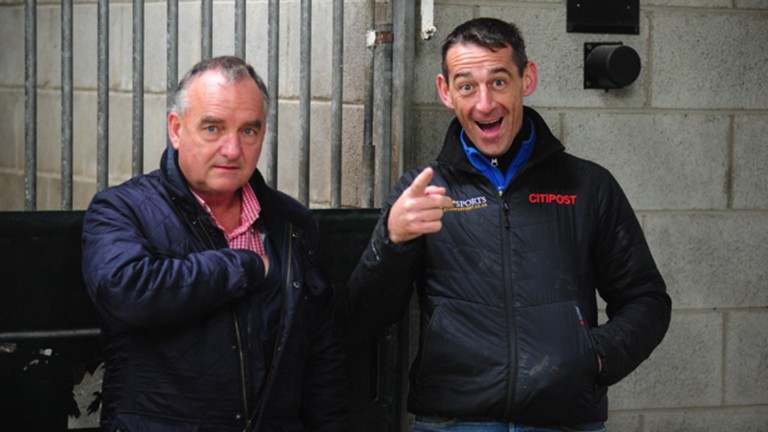 Talent spotters: Peter Vaughan (left) and an animated Davy Russell at Tattersalls
Tattersalls
"While we were there looking at the other one Energumene was in the lunging ring and he was that day what he is today, he's never looked any different. He was just gorgeous.

"I probably wasn't going to buy the other one and then we saw Energumene. He wasn't for sale so I ended up buying the pair of them to make sure I got the one I wanted. Christophe didn't want to sell him but I just had to have him."

To a buyer with Vaughan's record, Energumene's pedigree would be something of an expedition to the far reaches of the AQPS Stud Book.

"His pedigree would almost tell you not to buy him, but he was such a brilliant physical there was no chance he would ever turn out to be no good," says Vaughan.

"We got him home and I had originally bought him to run him. But he was such a fantastic physical we said we'd go to the sales because I knew he'd make some money despite his pedigree."

Vaughan's judgement was vindicated a second time when Energumene was knocked down to Tom Lacey for €50,000 at the Derby Sale and, one Larkhill point success later, he was on the lorry back to Ireland and bound for Mullins' yard.

Beauty is in the eye of the beholder and what Vaughan considers the less-than-promising side of the pedigree holds a special place in Dubourg's heart, one which stretches back to his own years riding at the major cross-country venues of the west such as Craon and Le Lion-d'Angers.

"Back in the day I rode for an owner-breeder called Emile Ouvry and we became friendly," recalls Dubourg. "I rode a very good cross-country horse of his called Acourio and he gave me the sister, Urbanie.

"At the time jockeys were not permitted to be breeders as well, so I gave her to my father as a broodmare.

"Olinight was the only foal of Urbanie's to reach the track. I broke her and pre-trained her and then, because I worked for Etienne Leenders at the time, I sent her into training with him.

"My father died around this time and I set up as a trainer and pre-trainer and decided to have Olinight as a broodmare."

Olinight was by April Night, a son of Kaldoun who, like Denham Red after him, stood at Pierre and Nelly de la Guillonniere's Haras de la Rousseliere in Anjou, a short drive from where Energumene was born and raised. 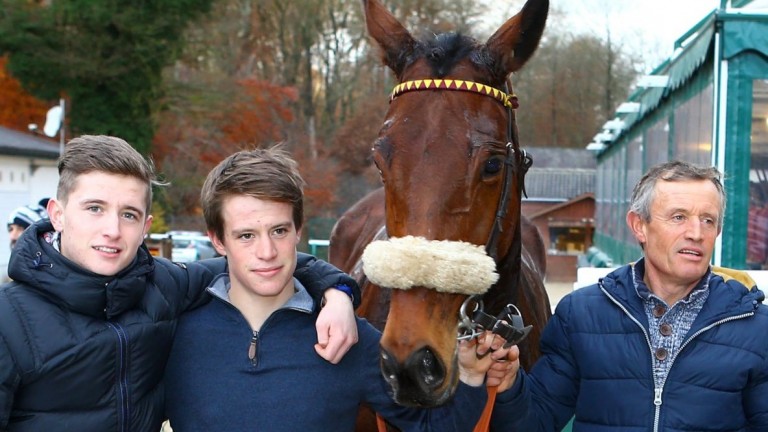 "I rode for Pierre a fair bit when I was a jockey," says Dubourg. "I like him a lot and I've always entrusted him with my mares. My first three covers were by April Night, and then Denham Red took up the mantle.

"Olinight had just three offspring: Dolinight and Energumene are full-brother and -sister, and there is Gold Night [by Honolulu].

Dubourg would not strike you as a sentimental man but there is evident pride in the choice of another of his broodmares.

"I've got Union Des Pictons, who I kept to breed from because I won on her as a three-year-old, and my three sons - Pierre, Kilian and Baptiste - have all won with her as well. It's more of a pastime than my real career."

Dubourg has had plenty of good horses through his hands as the pre-trainer trainer for Hamel Stud, whose stock all carry the distinctive 'Has' suffix.

But he will never forget Energumene, nor the man who wouldn't take no for an answer.

An 'energumene' is one who shouts and gesticulates loudly in public, drawing anxious glances from those around. Peter Vaughan prefers the shorthand of 'weirdo', though, in common with the breeder, he recalls a horse that was always easy to deal with.

Christophe Dubourg's wife named the horse on account of his impressive size; he was something of an outlier in the family given his dam Olinight and his full-sister Dolinight were both on the slight side.

FIRST PUBLISHED 10:05AM, FEB 21 2021
Energumene was in the lunging ring and he was that day what he is today, he's never looked any different. He was just gorgeous

'I told the owner the horse wasn't in great form' - Bourgeois strikes in Bobbyjo 'He's extraordinary' - Henderson thrilled with Champ ahead of Gold Cup bid 'He's going to carry a lot of Irish hopes going to Cheltenham - including mine' You don't need to join the Ramblers Association for this glorious ten-mile hike Willie Mullins: 'Two years ago I'd given up on the dream of winning a Gold Cup' Saint Roi out of Champion Hurdle with new French recruit waiting in the wings