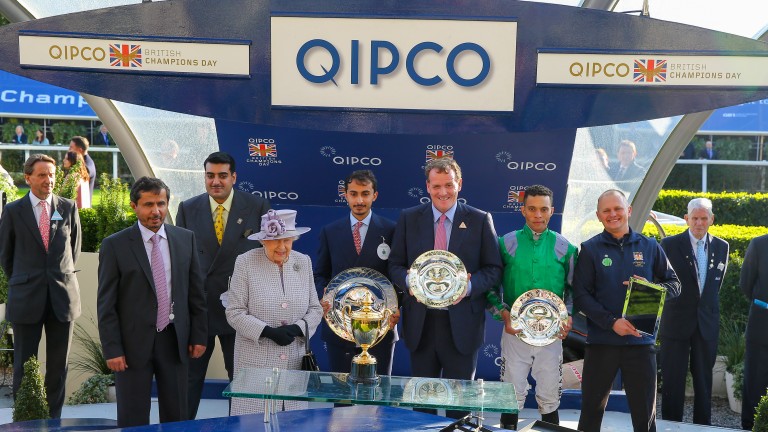 Connections of King Of Change receive their trophy from the Queen
Mark Cranham
1 of 1
By Martin Stevens 7:58PM, OCT 19 2019

Distinguished half-brothers Galileo and Sea The Stars supplied half of the six winners on Qipco British Champions Day at Ascot on Saturday, but the roll of honour this year also featured some less expensive sires.

As our run-down of the horses who triumphed on the testing ground shows, there was also a wide range of breeders and maternal families in the spotlight, with Pivotal deserving of special mention as grandsire of the winners of the meeting's two most prestigious races, King Of Change and Magical.

Donjuan Triumphant, a six-year-old entire, hails from the first crop of Dream Ahead, a son of Diktat who excelled on all surfaces but shone particularly brightly when a nine-length winner of the Middle Park Stakes on soft – an effort that earned him joint-champion two-year-old honours with none other than Frankel.

Dream Ahead, a half-brother to the dam of this season's Group 1-winning sprinter Fairyland, spent the first five years of his stallion career at Ballylinch Stud in County Kilkenny but has been stationed at Haras de Grandcamp in Normandy since 2017.

He has been in fine form of late, as his daughter Glass Slippers landed the Prix de l'Abbaye at Longchamp this month, while another son, Dream Shot, was second in the Group 3 Mercury Stakes at Dundalk on Friday.

Forever In Dreams, also by Dream Ahead, was third in the Champions Sprint to give the sire a one-three in the contest.

He was bred by Patrick Cosgrove and the Dream Ahead Syndicate out of the Tagula mare Mathuna, a 7½f Deauville maiden winner at two for Kildaragh Stud who was sold to Cosgrove's Kilcarn Park operation for just €15,500 as a three-year-old at the Goffs November Breeding-Stock Sale in 2007. 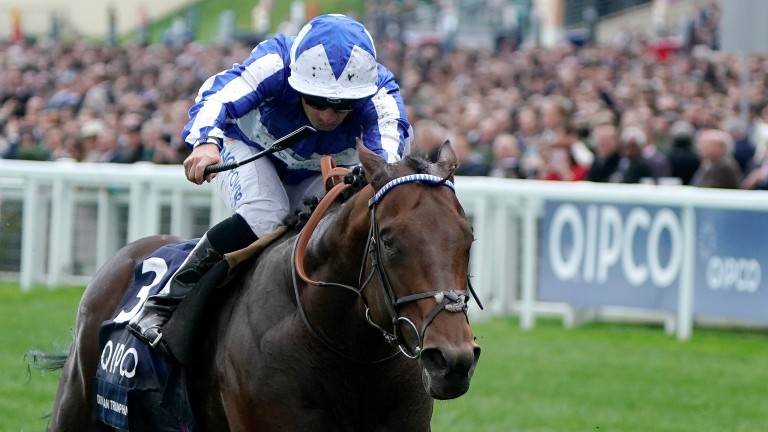 Mathuna, a half-sister to stakes winners Round Heels and Wilside, has produced four winners, with her first foal Caledonian Spring (by Amadeus Wolf) taking the Listed Ascendant Stakes.

The dam has an Invincible Spirit colt foal, bred in partnership by the Irish National Stud and Kilcarn Park, heading to the Goffs November Foal Sale next month, and she was covered by Oasis Dream this year.

Donjuan Triumphant was a €58,000 Goffs November foal purchase by Lynn Lodge Stud and was resold to original owner Middleham Park Racing for 30,000gns at the Tattersalls Craven Breeze-Up Sale.

Trainer Andrew Balding said after the race that Donjuan Triumphant would now head to France to embark on his stallion career.

Last year's St Leger hero, gaining his first victory here since the Doncaster Classic after a season disrupted by injury, is one of 83 Group/Grade 1 winners by Coolmore colossus Galileo.

The sire stands on the verge of matching the record haul of 84 elite scorers held by his former studmate Danehill.

Legendary blue hen Urban Sea featured as granddam of the first three home in the Long Distance Cup as her exceptional sons Galileo and Sea The Stars sired the first two home – staying ace Stradivarius was second – while her Classic-placed daughter Melikah was dam of third-placed Royal Line (by Dubawi). 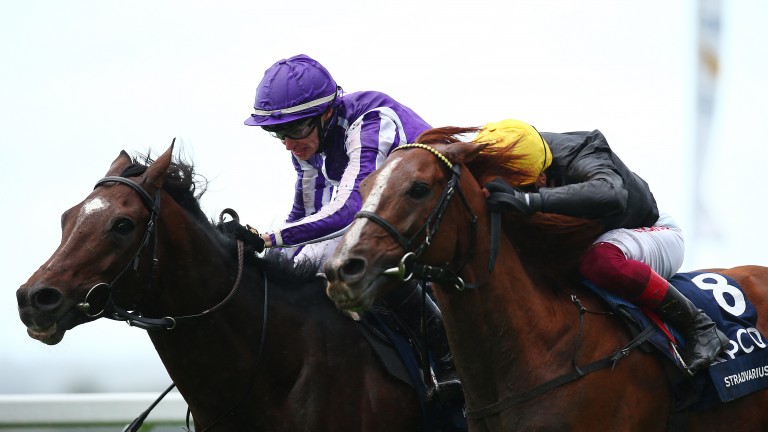 Kew Gardens was bred by David and Diane Nagle's famous Barronstown Stud and is one of four winners produced by Chelsea Rose, a daughter of Desert King who took the Moyglare Stud Stakes in 2004 for trainer Con Collins and owner Frances Donnelly.

The mare, purchased as a ten-year-old at Goffs November in 2012 for €450,000 by BBA Ireland on behalf of Barronstown, is also responsible for Group 3-winning sprinter Thawaany, Listed-placed Hamlool and Pale Orchid, the dam of this season's Listed-winning two-year-old Justifier.

A half-sister to Listed winners Downdraft and European, Chelsea Rose has a yearling colt by Galileo and returned to the perennial champion sire this year.

Galileo went agonisingly close to drawing level with Danehill's record tally of Group/Grade 1 winners when daughter Delphinia was beaten just a short head into second by Star Catcher after a brave front-running effort in this race.

Star Catcher is by Sea The Stars, giving Urban Sea's stallion sons another one-two on the card. She is one of 12 Group/Grade 1 winners by the 2009 world champion, who stands under the Aga Khan Studs banner at Gilltown Stud in County Kildare. 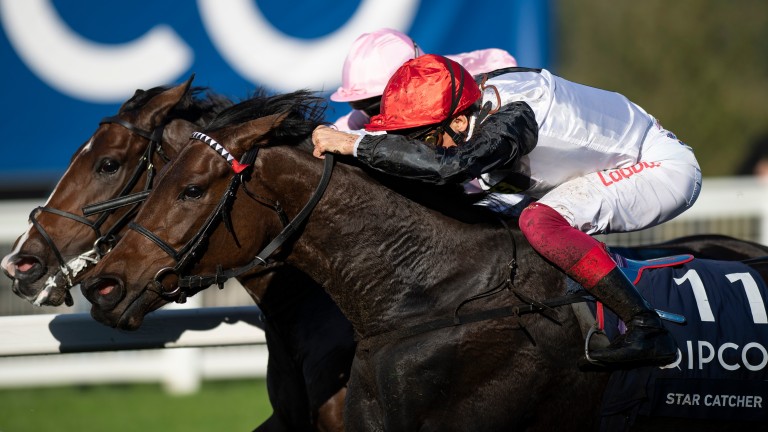 Star Catcher (near side): bred by Hascombe and Valiant Studs
Edward Whitaker

It was a good day at the office for Sea The Stars, as he had three runners on the Ascot card; besides Star Catcher and Stradivarius, the other was Fox Tal, a commendable fourth in the Champion Stakes.

Star Catcher is out of her owner-breeder Anthony Oppenheimer's fine broodmare Lynnwood Chase, a daughter of Horse Chestnut who has produced five winners including three who scored at Royal Ascot – Star Catcher herself, who triumphed in the Ribblesdale Stakes this year, and Tercentenary Stakes-winning brothers Cannock Chase and Pisco Sour.

Sadly Lynnwood Chase, a half-sister to Group 2 winner Lord Admiral, died this year at the age of 17 but she leaves a two-year-old Kingman filly named Maurimo who has run once for Roger Charlton, along with a yearling filly by Frankel and a colt foal from the first crop of Time Test.

King Of Change, who broke his maiden in April before running second in the 2,000 Guineas and winning the Listed Fortune Stakes last month, might have benefited from a lighter campaign than some of his rivals to run out a ready winner of the end of season showpiece over a mile.

He becomes the first Group/Grade 1 winner for sire Farhh, who signed off his own career with victory in the Champion Stakes on soft ground at Ascot in 2013.

The son of Pivotal has made an eye-catching start at stud, especially as his racecourse representation has been depleted by subfertility. 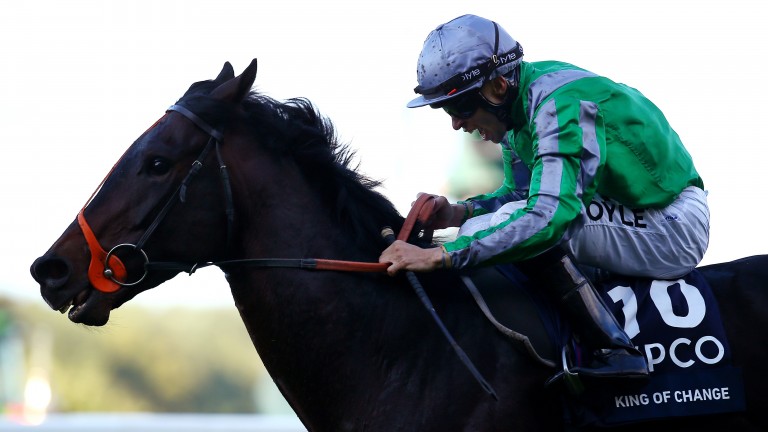 King Of Change: a flagbearer for the subfertile but talented sire Farhh
Charlie Crowhurst

King Of Change was bred by Rabbah Bloodstock out of the Echo Of Light mare Salacia, a seven-length Yarmouth maiden winner over 6f at three whose most notable run was probably getting to within a length and a half of The Fugue when second to the future multiple Group 1 heroine in a Newmarket maiden on her second start.

Salacia – who is out of the Group 3-winning Bering mare Neptune's Bride, making her a half-sister to Listed-placed pair Sea Chariot and Submariner – has got off to an excellent start at paddocks.

King Of Change is the mare's third foal and third winner, with her first foal being Group 3 winner and Group 1-placed Century Dream (by Cape Cross), who finished seventh to his half-brother at Ascot on Saturday.

Salacia has a two-year-old filly by Pivotal named Banna in training with Simon Crisford, along with a Golden Horn yearling filly and a filly foal by Sea The Stars. The mare visited Invincible Spirit this year.

Magical continued to endear herself to racegoers with a smooth victory over Addeybb (by Pivotal) on her ninth start of a busy season in which she has also won the Alleged Stakes, Mooresbridge Stakes, Tattersalls Gold Cup and Irish Champion Stakes and finished second in the Prince of Wales's Stakes, Eclipse and Juddmonte International.

In the aftermath of the race, trainer Aidan O'Brien attributed the filly's class and toughness to Galileo and indeed she is typical of many by the sire, who notched a British Champions Day double after Kew Gardens.

Magical's name provides a fitting description of her family as well as her athletic ability. She was bred by Coolmore entity Orpendale, Chelston and Wynatt out of Irish 1,000 Guineas, Nassau and Sun Chariot Stakes winner Halfway To Heaven, making her a sister to Lockinge Stakes heroine Rhododendron and Group 3 winner and South African sire Flying The Flag. 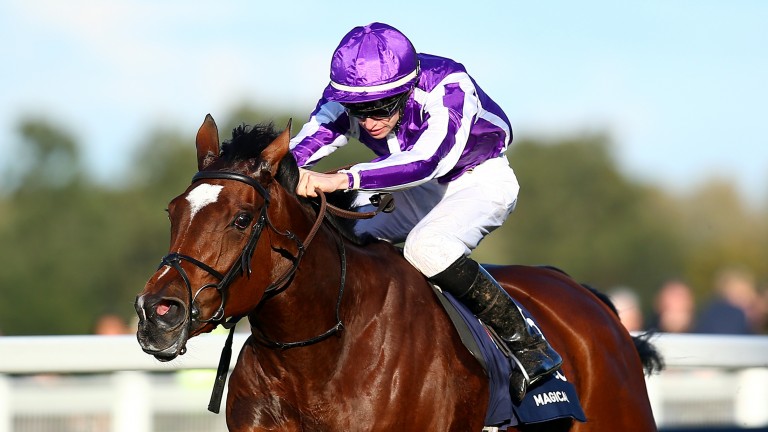 Halfway To Heaven was bred by Trevor Stewart from Pivotal and his brilliant sprinting mare Cassandra Go, who famously won the Temple Stakes and King's Stand Stakes while in foal.

The family was in the headlines again this week when a Dark Angel filly out of Allez Alaia, a sister to Halfway To Heaven, became the first horse to fetch seven figures at Book 2 of the Tattersalls October Yearling Sale when knocked down to Shadwell for 1,050,000gns.

Halfway To Heaven has a colt foal by Galileo and returned to the sire this year, while Cassandra Go is still going strong aged 23 with a yearling filly by Gleneagles already named Holly Golightly and a colt foal by Churchill. The great mare was covered by Saxon Warrior this season.

The concluding race on British Champions Day is only a handicap but it is worth more than £150,000 to the winner and so it provided the stage for a rags to riches feat of breeding.

The winner, Escobar, is by Famous Name, who won a remarkable 20 stakes races for trainer Dermot Weld and owner-breeder Khalid Abdullah. The son of Dansili was also a five-time Group 1 runner-up, including when beaten just a head by Vision D'Etat in the Prix du Jockey Club.

Famous Name stood at the Irish National Stud until 2017 but has covered in a dual-purpose role at Alastair Pim's Anngrove Stud in County Laois for the past two seasons.

Escobar, pictured earlier in the season at York, is a son of Famous Name
Martin Lynch

Escobar, by far the sire's best runner on the Flat, was bred by Peter Evans out of Saying Grace, a daughter of Brief Truce who ran a close third at huge odds in the Prix d'Astarte in 2001.

The 21-year-old mare, who hails from the family of champion two-year-old filly Lemon Souffle, was originally a Ir2,200gns yearling purchase by trainer Frances Crowley and has produced three winners, all black-type performers – Ghetto Gospel (by Celtic Swing) and Bobbi Grace (by Big Bad Bob) as well as Escobar, a former winner of the Washington Singer Stakes.

Saying Grace has a yearling colt by Famous Name sold to Bobby O'Ryan and Dermot Weld for €50,000 at last month's Tattersalls Ireland September Yearling Sale, and she was covered by Free Eagle this year.

Escobar was originally a €105,000 Goffs November foal purchase by O'Ryan and he was resold by Croom House Stud to Amanda Skiffington for €280,000 at the Goffs Orby Yearling Sale.

At the end of his three-year-old season with Hugo Palmer he was sold to Jason Kelly Bloodstock at the Tattersalls Autumn Horses in Training Sale for 100,000gns and his career is now overseen by David O'Meara for owner Withernsea Thoroughbred Limited.

Speed machine Soldier's Call to stand at Ballyhane Stud in 2020

FIRST PUBLISHED 7:58PM, OCT 19 2019
Magical's name provides a fitting description of her family as well as her athletic ability