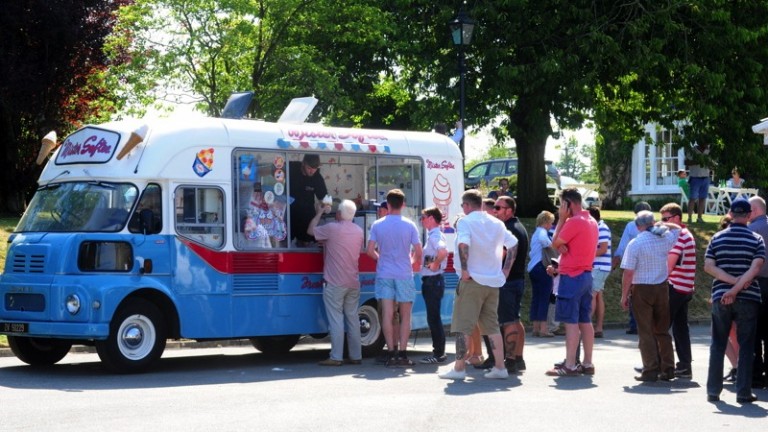 On a sweltering day at Fairyhouse, ice creams were as in strong demand as the store horses
Tattersalls Ireland
1 of 1
By Aisling Crowe UPDATED 2:18PM, JUN 28 2018

Trade during the first session of the Tattersalls Ireland Derby Sale on Wednesday sizzled more than the many summer barbecues being enjoyed in Ireland during the current heatwave.

Key indicators of the sale's economic health were up, with buyers fighting over the choice specimens of store horse on offer.

The average price increased by three per cent on the opening day last year to €54,792, while the median grew by seven per cent to €48,000.

Those figures were achieved despite a decrease in the total sales to €8,821,500 – a year-on-year drop of nine per cent.

A selective market was reflected in a decline of six points in the clearance rate to 82 per cent on day one.

Overbury Stud stalwart Kayf Tara is one of the most in-demand sires at the sale and it was one of his sons who topped the charts at the close of business, as he had been doing for almost all of the session.

Already named Fletch, lot 22 hails from a French family that will be familiar to British and Irish racing fans with three Grade 1 winners, all trained by Willie Mullins, on the page. 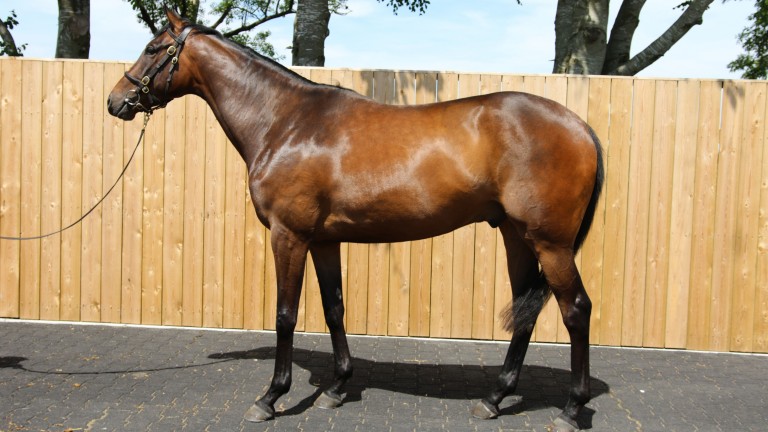 The Kayf Tara gelding who will join Olly Murphy after selling for €250,000
Jack Lyons

Under the fourth dam is Sous Les Cieux, who was victorious in the Royal Bond Novice Hurdle across the road from the sales complex at Fairyhouse racecourse.

Murphy bought Fletch on behalf of his son Olly, who will train the gelding for Barbara Hester.

“He's a lovely horse and I'm very lucky to have him to train," said Olly Murphy. "He has plenty of quality about him. He has been bought for Barbara Hester to join her lovely string of young horses and I'm very lucky she has supported me from the start."

Jimmy Murphy of Redpender Stud is no stranger to success in this sales ring and graduates of his Kilkenny nursery in the National Hunt realm include multiple Grade 1 winner First Lieutenant.

He offered a pair of well-bred geldings on Wednesday and both horses sparked bidding wars among eager buyers.

Gordon Elliott and Eddie O’Leary of Gigginstown House Stud were the purchasers of Murphy’s Presenting gelding out of Synthe Davis.

But they were forced all the way to €200,000 to secure the first foal of the winning Saint Des Saints mare, who is a half-sister to Grade 2 winner Violin Davis. Their dam Trumpet Davis is a sister to the brilliant two-mile chaser Klairon Davis.

The sale represented an impressive pinhooking success for Murphy, who purchased the gelding as a foal in the Tattersalls Ireland ring from Woodhouse Stud for €40,000. 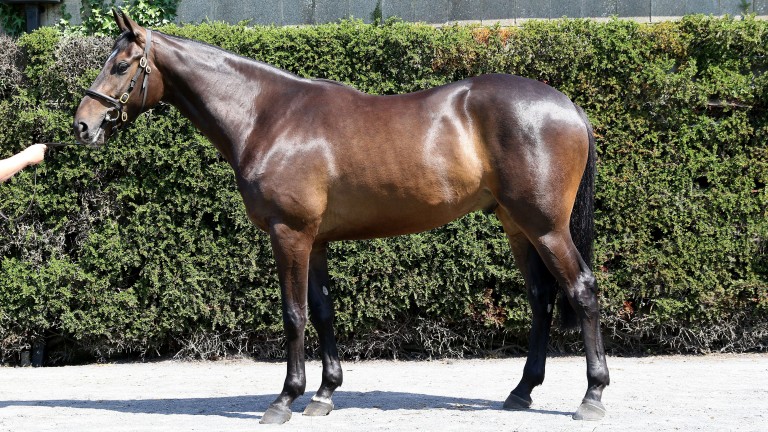 The Presenting gelding bought by Jimmy Murphy for €40,000 and resold to Gordon Elliott for €200,000
Tattersalls Ireland

Again, it was a significant return on Murphy’s investment as the gelding cost him €42,000 as a foal from the draft of Rottenhill Stud at the 2015 Tattersalls Ireland November Sale.

The strapping son of Stowaway is the second foal out of Shop DJ, a Grade 3 winner over hurdles who was also second in the Grade 1 Champion Novice Chase at the Punchestown Festival. Her dam Shoplifter is a three-parts sister to First Lieutenant.

Hemmings was delighted with his purchase, joking: “David tells me what we’re doing. This horse is going to win the Grand National.”

The owner of three winners of Aintree’s famous race – Ballabriggs, Hedgehunter and Many Clouds – elaborated on what the Stowaway gelding and his other purchases have in store.

“He's a good-looking horse,” said Hemmings. “They will all go to Kilbrin to be checked over and then travel to the UK for evaluation.

"They will return to Cork for pre-training and then we decide which trainers they will go to.” 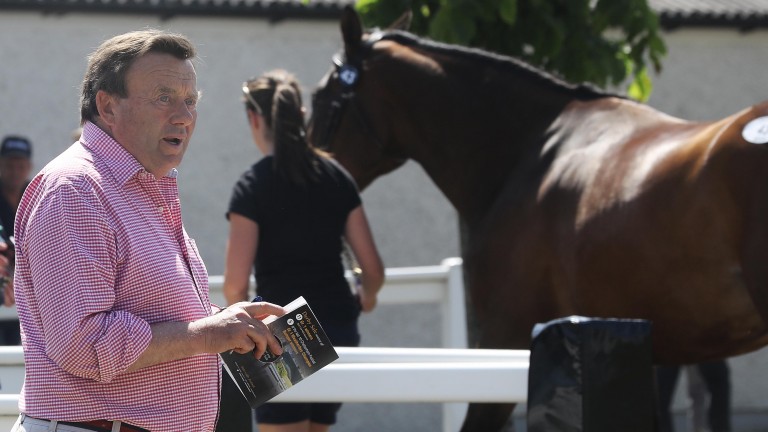 Among the others heading to Kilbrin will be a son of Getaway out of Ned’s Joy, a three-parts sister to Hemmings’ ill-fated Aintree hero Many Clouds and a sister to Grade 1 winner The Tullow Tank.

Consigned by Mooreshill Farm on behalf of Gerry Merrigan, the gelding – the first produce of his unraced dam – was sold to Hemmings for €50,000.

Hemmings' helicopter lifted out of the Fairyhouse sales complex into a cloudless summer sky later on Wednesday afternoon, but Highflyer’s David Minton will be back on Thursday hoping to add more horses to the owner’s list of purchases.

Several stallions who passed away just as they appeared on the cusp of greatness have been in demand this sales season and so it was once more on Wednesday with Vision D’Etat showing how great a loss his death at the age of 13 in March could be to the French breeding industry.

His sole representative in the Derby Sale catalogue was consigned by Brown Island Stables and is a half-brother to Cilaos Emery, who won the Grade 1 Champion Novice Hurdle at the 2017 Punchestown Festival for Willie Mullins. 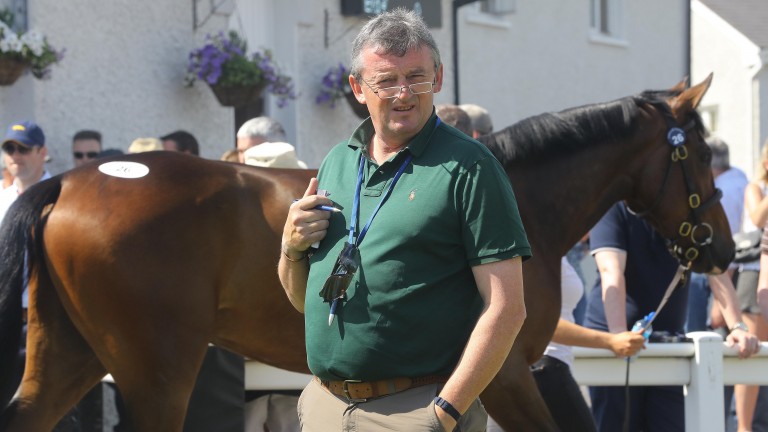 Named Fidji Emery, the bay gelding was a private purchase in France by Johnny Collins and he had proved popular with prospective purchasers inspecting horses prior to the sale.

“He had hardly been in his stable since getting to the sales ground, he'd been that busy,” said Collins. “He's just a lovely horse and since I bought him, his half-brother had come good.”

The loss of Fame And Glory has also been felt keenly and his offspring were almost in as much demand as the ice cream dispensed outside the sales ring.

Kevin Ross had to see off a determined Matt Coleman very early in proceedings to secure a well-related gelding by the late Grange Stud stallion from the Manister House Stud consignment.

The bay is inbred 3x3 to the great Sadler’s Wells as his dam No Ice Or Lemon is an unraced daughter of Old Vic, one of the first sons of the phenomenal stallion to make his mark as a National Hunt stallion. 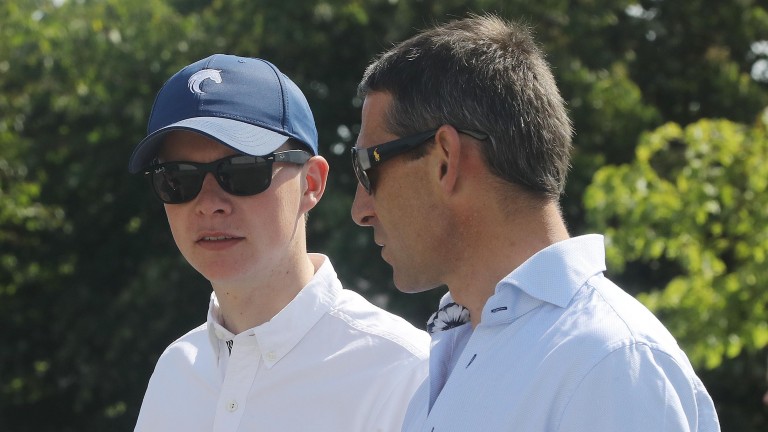 No Ice or Lemon is a sister to Ninetieth Minute, who was trained by Tom Taaffe to win the Coral Cup at Cheltenham and also finished runner-up in the Grade 1 Hatton’s Grace Hurdle at Fairyhouse during his fruitful career.

“He was one of our picks of the sale and is a fine, athletic horse," commented Ross. "The sire speaks for himself and this gelding is for an established client to stay in Ireland.

Fame And Glory was one of the hottest sires on a scorching day with 14 of his progeny selling for a 100 per cent clearance rate and a total of €1,113,000.

Two of his sons made six-figures, the second being Brentford Farm’s gelding out of Westgrove Berry, a winning daughter of Presenting and the dam of two winners including Jetstream Jack.

Record-priced Chicquita's first foal gets off the mark at Naas

It's a heatwave! The hot two-year-olds who could make their debuts soon