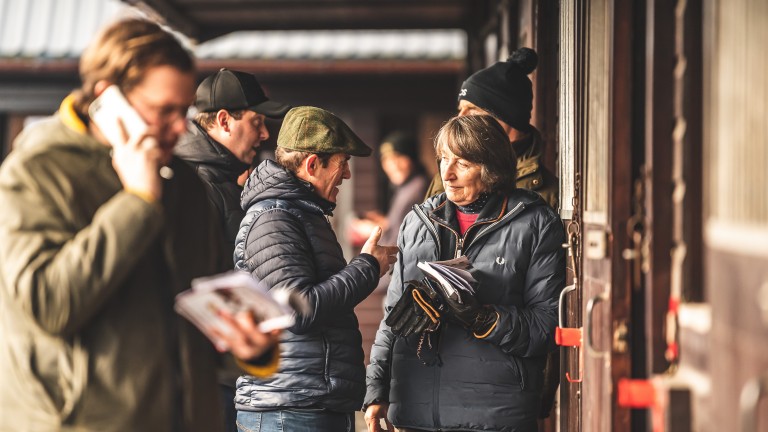 Henrietta Knight and Michael Moore deep in discussion in the Doncaster stable yard
Sarah Farnsworth
1 of 1
UPDATED 9:23AM, JAN 23 2020

Henrietta Knight sent another shockwave through the National Hunt market on Wednesday when she went to £370,000 to secure the impressive bumper winner Keskonrisk during day two of the Goffs UK January Sale.

Knight was last seen in action at the Tattersalls Cheltenham December Sale, when she parted with £450,000 for top lot Gallyhill, and she once again proved an irresistible opponent as some of the biggest National Hunt buyers around went in pursuit of the Camas Park Stud-consigned offering.

"Here's the one you've all been waiting for," said Henry Beeby from the rostrum as the son of No Risk At All took to the stage. However, bidders were content to wait just a little longer, as the auctioneer had to drop down to £50,000 to attract an opening offer.

Knight, seated in the front row of the auditorium with Michael Moore of Ballincurrig House Stud, joined in at the £220,000 mark, but no sooner had she seen off the attention of Tom Malone, than Matt Coleman, hidden away in the office directly behind her, entered the fray.

When Coleman threw in a bid of £360,000, Knight appeared to cry enough with a clear shake of the head. But, after a lengthy pause for thought, the Gold Cup-winning trainer, who was on the phone throughout the bidding, delivered what proved to be the decisive £10,000 increase.

Rumours as to who Knight bought Gallyhill for have abound ever since she signalled the winning bid, and she again remained tight-lipped when quizzed about whose colours Keskonrisk would now carry.

Not only would she not be drawn on who now owns the French-bred five-year-old, but she was also unable to reveal whether it was the same client who purchased Gallyhill.

When asked about who she was representing, Knight simply said: "I've got quite a lot of orders nowadays! The horse may go back to Ireland."

She was more forthcoming with her assessment of Keskonrisk, however, as she said: "I love the stallion and I'd been to see the horse in Ireland; he's a real athlete, I've seen him jumping and I really like him as a type.

"He's not the big, old fashioned Irish chasing type, he's very French. The horse I bought at Cheltenham in December is very different, he's a big, strapping chasing type, whereas this horse is more of a hurdler - to start with at least. He might have one more run in a bumper and then be turned away."

Having contributed some significant sums at recent sales, Knight is well placed to appraise the health of the jumps market, and on the state of trade she said: "The National Hunt market is very strong at the moment, especially for a good horse because the good ones are scarce." 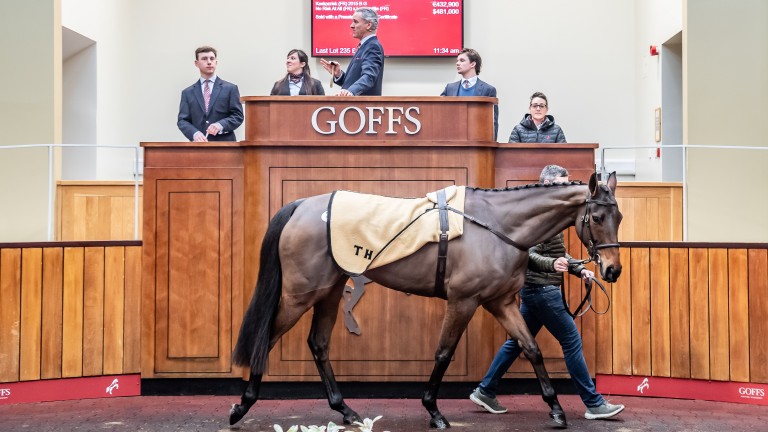 Keskonrisk: son of No Risk At All is knocked down to Henrietta Knight for £370,000
Sarah Farnsworth
When asked if she felt confident buyers were getting what they paid for when spending such eye-watering sums on elite National Hunt prospects, Knight said: "Very much so. I like to buy a horse who's got a bit of form as you can see what they can do on the racecourse.

"The market is very strong for store horses as well, but with the stores you don't really know if they'll jump or not. But I know this horse jumps as I've seen all the videos of him schooling and I was really taken with him."

"Timmy junior bought him in France as a two-year-old and he's been with us ever since," said Hyde. "He always showed a lot of pace and has been very straightforward." 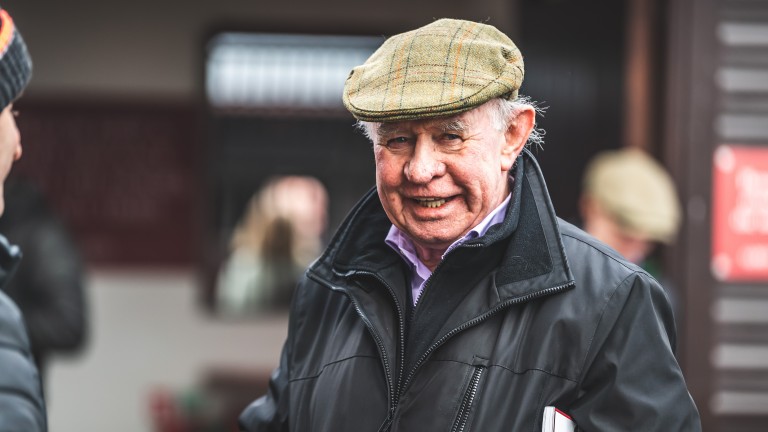 Timmy Hyde: "I thought he'd make a good price but I didn't think he'd make that much"
Sarah Farnsworth
Keskonrisk has been something of a Hyde family project to date, with the master of Camas Park having prepared the horse, who was not only sourced by his son but ridden to victory by his grandson, Daniel.

"I have three grandsons with [jockey] licences, so if I think a horse has a chance in a bumper that's where he'll go!" quipped Hyde.

"That won't always be the case, but the lad who rode him, Daniel, is at boarding school so he doesn't even ride out every morning. He's only 16 but he gave the horse a good ride at Fairyhouse." 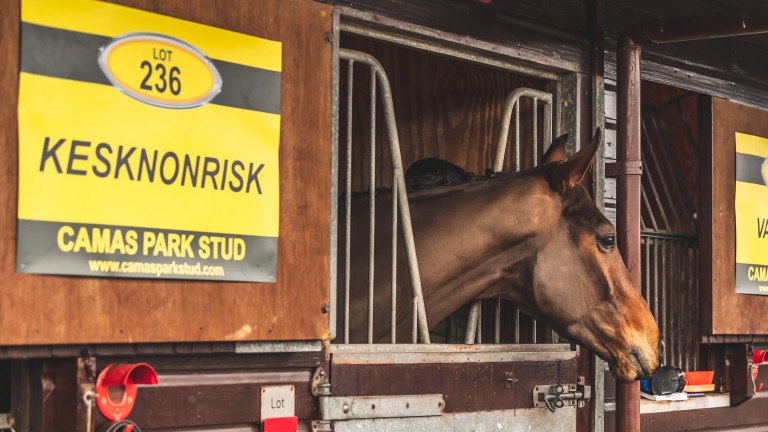 Keskonrisk keeps an eye on proceedings from his stable
Sarah Farnsworth
Having seen his offering set a new high mark for the January Sale, Hyde said that he had expected Keskonrisk to prove popular with buyers but hadn't foreseen the horse entering record-breaking territory.

"I thought he'd make a good price but I didn't think he'd make that much," he said. "I just hope he's very good for Henrietta and whoever she's bought him for. She's a very good judge, as proved by all the champions she's bought before, so I hope he does her proud."

Keskonrisk, who shares his sire with Champion Hurdle favourite Epatante, surpassed the previous January Sale record which, coincidentally, was set by Hyde when he purchased Phoenix Way, who went on to run in the colours of JP McManus, for £270,000 in 2018.

No Risk At All is due to stand the upcoming breeding season at Haras de Montaigu at a fee of €7,000.

The other horse to bring a six-figure sum at the January Sale was knocked down to Kevin Ross, as the agent went to £115,000 for Fishkhov, a son of Sholokhov who finished runner-up in a Dromahane maiden on debut for Robert Tyner.

"I just loved the way he went through his race, he did everything right and the first two really quickened up in what I thought was a good maiden," said Ross. "I thought it was a really promising debut and he looks like a lovely type for the future.

"He's a lovely looking individual too and the sire is doing well. He's been bought for Harry Fry and one of his owners." 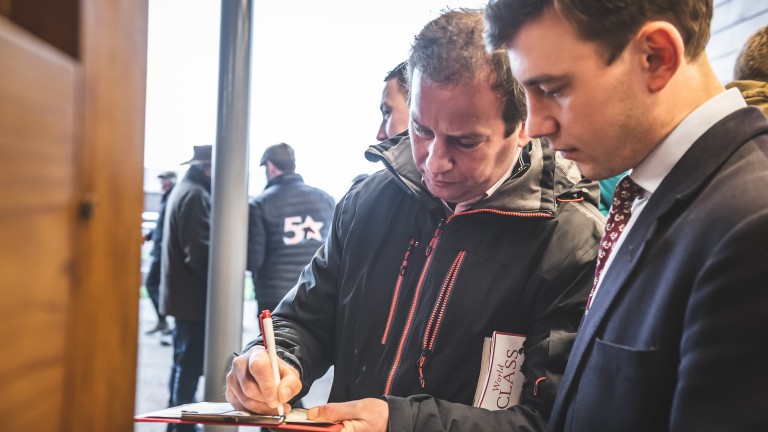 Kevin Ross signs the docket for Fishkhov
Sarah Farnsworth
Fishkhov was another headline act to have been sourced privately across the Channel, as Tyner explained: "I bought him as a yearling in France. He's a lovely horse for the future with a nice bit of scope over a jump. I sold Harry a nice horse called American and I think this is a similar type."

The horse Fishkhov finished runner-up to was Vanillier, who was also offered in Doncaster on Wednesday. However, despite that winning effort, the son of Martaline was led out of the ring having failed to find a buyer.

A Distant Place broke his maiden by a wide margin at Carrigarostig on Sunday, and that performance caught the attention of Highflyer Bloodstock's Anthony Bromley, as the agent went to £78,000 to secure the son of Sunday Break from the Fiddaun Farm draft.

Derek O'Connor was in the saddle for that success, and the rider had another reason to celebrate having seen the horse sell, as A Distant Place was owned by his wife, Carol O'Donnell.

"There's strong trade for that type of horse, as we've seen earlier in the day, so we're very happy," said O'Connor. The five-year-old, who was trained by John Staunton, was signed for by Fiddaun at just €7,000 at the 2018 Goffs Land Rover Sale. 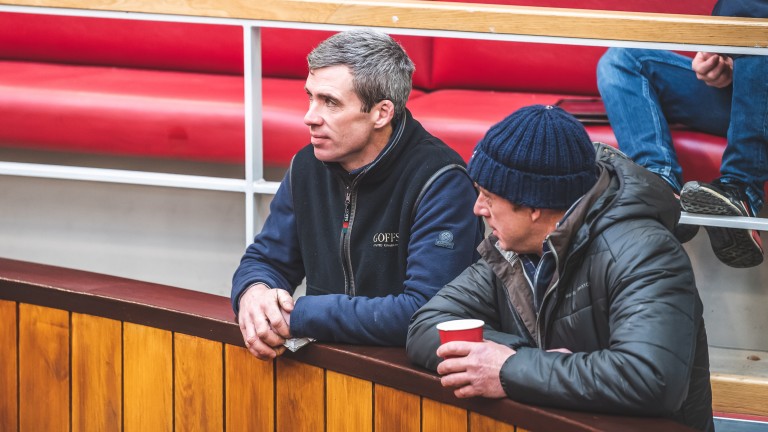 Derek O'Connor looks on as A Distant Place sells to Anthony Bromley for £78,000
Sarah Farnsworth
O'Connor continued: "He was a bit unfurnished as a three-year-old but he's developed into a lovely horse now. It was a good performance on Sunday and I think he's got a good career ahead of him. He's got a lot of natural speed."

Bromley, who could not reveal the identity of his client, said no plans had been put in place as regards a trainer, but heaped praise on O'Connor for his efforts in steering A Distant Place to a six-length success on his third start between the flags.

"I was really impressed with the performance on Sunday," said the Highflyer man. "It was a very smooth performance and a masterclass by Derek O'Connor, it was poetry in motion! The horse looks like he's got a turn of foot as he scooted clear."

At the close of trade, Goffs UK's managing director Tim Kent said: "As with Tuesday's National Hunt foals, feedback on Wednesday's session was very positive when the catalogue was released and to see Keskonrisk set a new record price of £370,000 is a great result.

"Over the two days we have welcomed a diverse buying bench and have exceeded last year's turnover with 35 less horses so we have made a positive start to 2020.

"We would like to extend our thanks to the vendors who have supported the sale and now turn our efforts to the Aintree Sale at the Randox Health Grand National festival, where we look forward to offering more high-end pointers and form horses."

Blue Bresil is talk of the town as Lady Rebecca's grandson tops trade at £44,000 2.1 million gns son of Dubawi set for Godolphin debut in hot Newmarket maiden 'Only one question remained, could we afford Logician? We just about could' South-west breeders to the fore as awesome Honeysuckle scoops up more silverware Malone goes to £50,000 for 'beautiful' Secret Scripture at Goffs UK Lady Buttons: 'She'll race again but we won't be greedy - she's too precious'