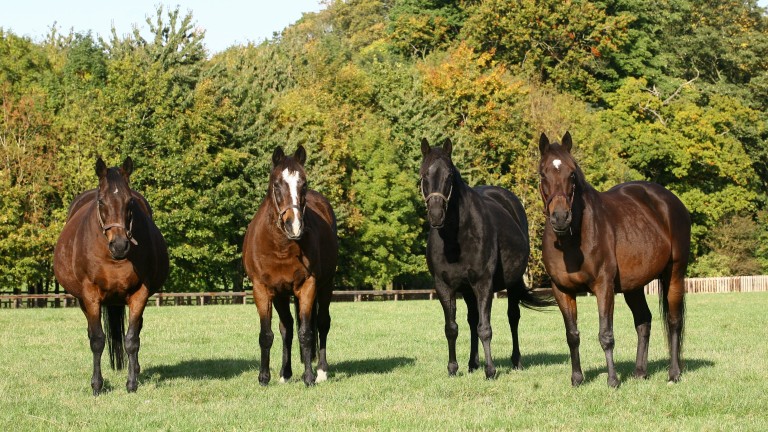 Another chapter in the ever-growing history of Juddmonte blue hen Hasili was written on Saturday when her stallion son Raise The Flag supplied a first Group 1 winner courtesy of Etah James in the Sydney Cup at Randwick.

The seven-year-old mare, trained by Ciaron Maher and David Eustace, scored a head victory over the Savabeel colt The Chosen One, with the Irish-bred Sea The Stars gelding Raheen House – trying to emulate his brother Shraaoh's success in the race last year – half a length back in third.

Raise The Flag, by Sadler's Wells out of Hasili, finished sixth in a Longchamp maiden for Andre Fabre on his sole start but earned a place at stud as a half-brother to five top-level winners – Banks Hill, Cacique, Champs Elysees and Intercontinental, all by Danehill, and Heat Haze by Green Desert. The dam produced another two Group 1-placed performers besides, in Dansili and Deluxe.

Dansili (also by Danehill) was a Group 2 winner but never quite won at the highest level, despite being placed six times including when a close second to Giant's Causeway in the Sussex Stakes and third in a blanket finish to the Breeders' Cup Mile.

He more than made up for that omission from his racing CV in his stallion career for Juddmonte, delivering 21 elite winners including world champion Harbinger, Arc hero Rail Link and celebrities Flintshire, Proviso and The Fugue – as well as a previous Sydney Cup scorer in Grand Marshal.

Dansili is doing most to ensure that Hasili's name appears in the pedigrees of countless top-class runners as he has a tribe of useful stallion sons, including Bated Breath, Harbinger and Zoffany, and plenty of daughters producing quality stock. Indeed, he is damsire of ten top-flight winners including Aspetar, Channel, Magic Wand and Uni last year alone.

Dansili and Raise The Flag are among four of Hasili's sons to become Group 1 sires along with Cacique, whose small crops due to subfertility contained Dominant, Mutual Trust and Slumber, and Champs Elysees, whose offspring include 1,000 Guineas winner Billesdon Brook, Gold Cup victor Trip To Paris and dual Australian Cup scorer Harlem.

Hasili's influence continues to deepen through her daughters, too. For starters, Banks Hill is the dam of Prix Jean Romanet winner Romantica and Listed scorer Ideal World, a son of Kingmambo who stands in South Africa and has supplied Group 1 winners Rainbow Bridge, Samurai Warrior and Smart Call. Banks Hill is also the granddam of Hampton Court Stakes winner Sangarius.

The great mare Hasili – a Listed winner by Kahyasi out of Kerali, a daughter of High Line and Juddmonte foundation mare Sookera – died aged 27 in 2018.

Raise The Flag is her last son at stud following the retirement of Cacique and Dansili and the death of Champs Elysees.

The 15-year-old stands at White Robe Lodge in New Zealand and is also the source of Group 3 winner Broadside as well as Listed scorers Civil Disobedience, Orepuki Lad, Parthesia, Raise You Ten and Yogi, who was ninth behind Etah James on Saturday.

Etah James was bred by Mark Lupton – who trained the mare to finish a close fourth to Roger That in last month's Auckland Cup at Ellerslie – and his wife Cath, along with long-time friends Gary Howes, a London lawyer, and Sydney businessman Terry Reid.

She is out of the winning Danasinga mare Etah, a sister to dual Group 3 scorer Tickle. The family has been based in Australasia since the 1970s, when fifth dam Cheerful – a daughter of 2,000 Guineas winner Baldric and Ribblesdale Stakes runner-up Fusil – was exported there from Britain.

FIRST PUBLISHED 2:04PM, APR 11 2020
Dansili and Raise The Flag are among four of Hasili's sons to become Group 1 sires along with Cacique and Champs Elysees