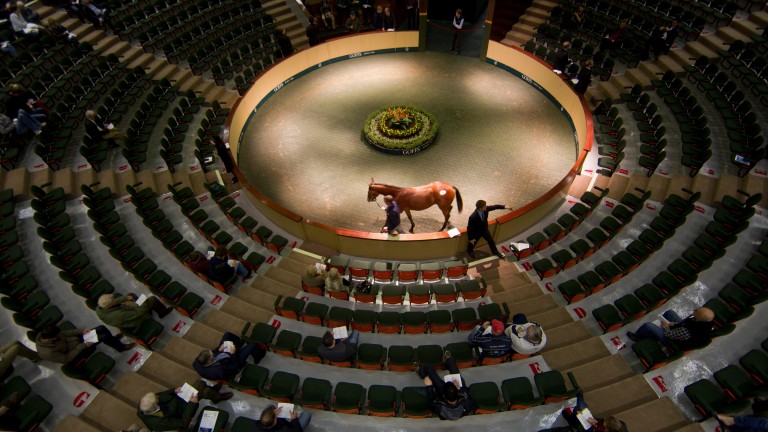 The Goffs November Breeding-Stock Sale will be sandwiched by foal trade
Patrick McCann
1 of 1
By Bloodstock World Staff 12:30AM, OCT 20 2019

The Goffs November Breeding-Stock Sale catalogue, featuring 367 lots who will go under the hammer between the first and second parts of foal trade on November 21-22, has been published online.

The auction was in the spotlight during Qipco British Champions Day at Ascot on Saturday, with the dams of winners Donjuan Triumphant and Kew Gardens both sourced at previous renewals.

The dams of Classic winners Romanised and Harzand were also bought at the Goffs November Breeding-Stock Sale.

Galileo has the largest presence on the index of sires of lots, with 19 catalogued, while stock by the likes of Danehill Dancer, Danehill, Dansili, Dark Angel, Dubawi, Green Desert, Invincible Spirit, Montjeu, Oasis Dream, Pivotal, Sadler’s Wells, Sea The Stars, and Shamardal will also be available.

Among the individual catalogue highlights are Height Of Elegance, a Galileo three-parts sister to champion two-year-old filly Listen in foal to Caravaggio; Dufay, a winning daughter of Dubawi and Group 1 winner White Moonstone pregnant to Invincible Spirit; and Steel Princess, the stakes-winning dam of Sarah Lynx in foal to No Nay Never.

Other standouts include Snowflakes, a winning Galileo sister to the brilliant Winter, in foal to US Navy Flag; Could It Be Love, a Group 1-placed War Front half-sister to Uncle Mo in foal to Australia; and Actress, a Group 3-winning mare by Declaration of War in foal to No Nay Never.

Goffs Group chief executive Henry Beeby said: "More Group 1 success in 2019 was the pinnacle of another year where we saw progeny of November mares win consistently around the world.

"Goffs November Breeding Stock is a sale with huge international appeal and we believe this year’s catalogue is packed with potential.

"We have reduced the numbers slightly this year, with quality over quantity very much in mind, to produce a catalogue of real strength and depth.

"It will take place immediately after our market-leading November Foal Sale Part 1 and will be followed by Part 2 of the foals, resulting in a five-day November Sale that serious buyers simply cannot afford to miss.”

The Goffs November Breeding-Stock Sale will commence at 10am on Thursday, November 21, and continue until approximately 1pm on Friday, November 22.

FIRST PUBLISHED 12:30AM, OCT 20 2019
We have reduced the numbers slightly this year, with quality over quantity very much in mind