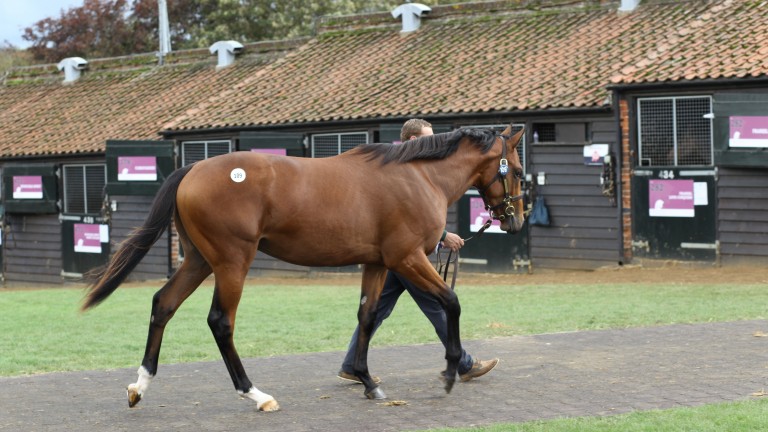 An old fashioned superpower showdown between Godolphin and Coolmore saw a blue-blooded son of Dubawi ignite the opening session of Book 1 of the Tattersalls October Yearling Sale at 2,100,000gns when knocked down to Sheikh Mohammed's operation.

The rivals clashed over the colt out of the Grade 3-placed Galileo mare Cushion, who in turn is out of the mighty Attraction. The colt was offered by the late Duke of Roxburghe's Floors Stud, who bred the youngster in partnership with Coolmore.

The old foes traded increasingly costly raises from their respective positions by the parade ring, with Anthony Stroud and David Loder representing Godolphin and MV Magnier, who was joined by Georg von Opel, on bidding duties for Coolmore.

The bid board ticked over in 25,000gns increments deep into six-figure territory, prompting auctioneer Ollie Fowlston to remark: "The first to a million might just get him."

Magnier won that particular race when, at the 925,000gns mark, he looked towards the bid spotter by the rope and raised his left index finger to signal the jump to 1,000,000gns. However, Stroud remained resolute despite the strong-arm tactics, and fired back with a 50,000gns increase of his own delivered with a subtle nod of the head in the direction of the bid spotter on the podium by the entrance to the ring. 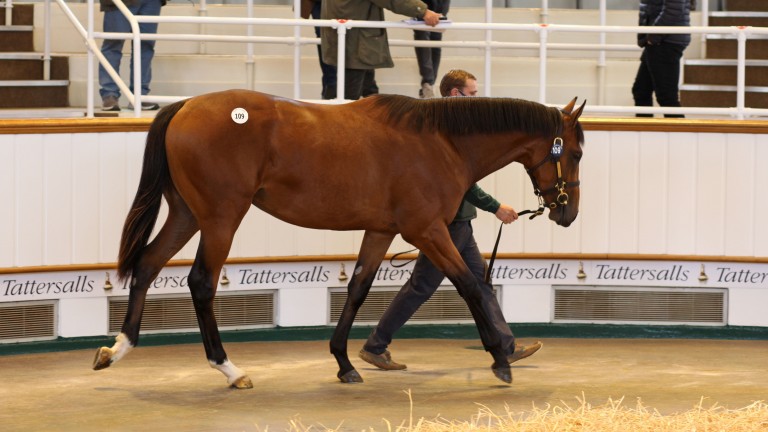 Floors Stud's Dubawi colt out of the stakes-placed Cushion makes 2,100,000gns to Anthony Stroud on behalf of Godolphin
Laura Green

An expectant hush fell around Park Paddocks while the seven-figure jousting intensified, as engrossed onlookers followed the back-and-forth bidding duel like spectators watching a marathon rally at Wimbledon.

Ultimately it was Stroud who proved the more determined, with a final 100,000gns increase enough to bring the gavel down with a resounding thwack.

"He's a lovely horse who's obviously by Dubawi," said Stroud after signing the session-topping docket. "He moves incredibly well and comes from a very good stud. Collectively we really liked him. It just shows you, when a nice horse comes into the ring, there are still people there for these collectors' items."

Stroud continued: "It's so sad that Guy Roxburghe isn't here as he was a wonderful breeder, a good friend and a great enthusiast." 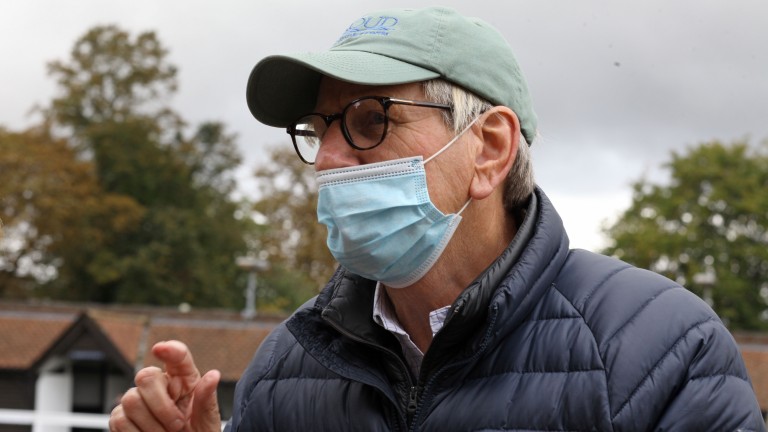 The Dubawi colt is the second foal produced by Cushion, who won two races in the colours of the Duke and also finished runner-up in a pair of US Grade 3s having switched from John Gosden to Christophe Clement. The mare produced a colt by No Nay Never on February 29 this year and subsequently returned to the son of Scat Daddy.

The Dubawi colt was the second seven-figure lot sold by Floors Stud on Tuesday after Godolphin also secured the Frankel colt out of Attraction. Stroud saw off the attentions of Andrew Balding to secure the brother to Elarqam with a bid of 1,100,000gns.

"We're ecstatic, we're very, very excited, it's tear-jerking stuff," said the Duchess of Roxburghe, Virginia Wynn-Williams. "I'm thrilled for my late husband, who did nothing but dream of Attraction and she's really done us proud today.

"They were two lovely horses and have been since they were foals. My husband always thought they were two of the best he's ever produced and he's been proven right. We wish Anthony Stroud and the team all the success in the world.

"I've got some huge help between Ed Sackville and Simon Marsh, and the team at Floors have been amazing too. Chris Gillon, the stud manager, deserves a special mention as he has produced these horses to such a wonderful standard." 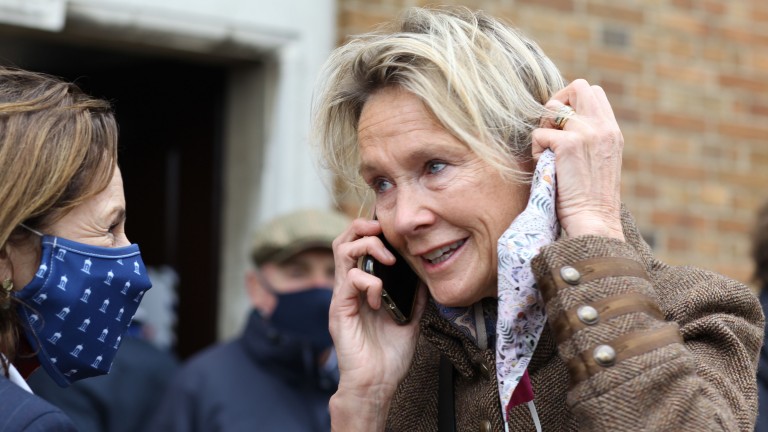 The results were particularly poignant for the Floors Stud team, as the Duchess revealed the operation would be scaling back its breeding interests, with the remaining broodmare band set to be boarded away from the famed Scottish Borders farm.

"We're very keen, myself and my son George Innes-Ker, to carry on, but in a smaller, more commercial way," she said. "And it won't be remaining at Floors Stud, which is very sad but that's the way it's going to be unfortunately."

The Duchess described stud manager Gillon as "a godsend" for his efforts in ensuring the smooth running of the operation since the Duke's death last August, and in turn Gillon paid tribute to the team on the farm who have put in the hard yards to get the draft to Tattersalls in peak condition.

"With all the interest we had beforehand we knew we had something special on our hands," he said. "Watching the Frankel colt sell was a bit of a blur to be honest, it was so exciting and good to see the whole team's hard work being rewarded. The two girls at home, Christina Chesser and Laura Knox, have been absolutely amazing. 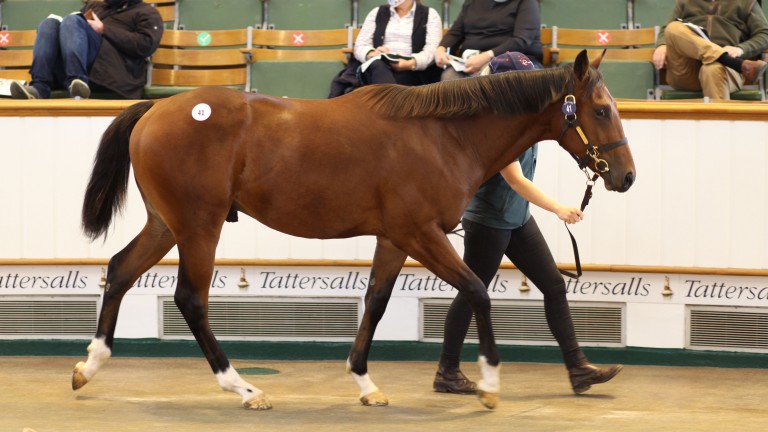 Lot 41: the Frankel colt out of Attraction in the spotlight at Tattersalls
LAURA GREEN

"It's been a hard time for the family and it's been tough for the staff on the stud as well, but I think the best thing we could have done is make sure we got our heads down and worked hard and got these horses here at the top of their game. I'm sure the Duke will be up there smiling down on everyone for all the hard work they've put in."

Gillon continued: "The late Duke saw this Frankel colt as a foal and absolutely loved him and I think everyone was in agreement that he was the nicest foal we'd seen from Attraction. Seeing how he's developed during his prep and behaved at the sales, he certainly looks the best the mare has produced."

The Frankel colt is the third seven-figure yearling produced by Attraction, whose Book 1 receipts now total 5,645,000gns. The priciest of those is the Group 2-winning Elarqam, a 1,600,000gns buy, while Maydanny, a son of Dubawi, fetched 1,350,000gns. Both horses were purchased by Shadwell.

Gillon also offered an update on the 19-year-old Attraction, and added that there should be plenty more to come from the daughter of Efisio.

"Attraction is at home on the stud and is looking brilliant at the moment," he said. "She's in foal to Kingman and carrying a filly, which is really exciting, and she's got a Dubawi colt on the ground, he's a really exciting prospect too."

In all, Floors Stud sold three lots for a combined 3,250,000gns during Book 1's opening session.

FIRST PUBLISHED 11:02AM, OCT 19 2020
He did a fantastic job and would have loved to have been here. It's a great shame but he's probably looking down on us now