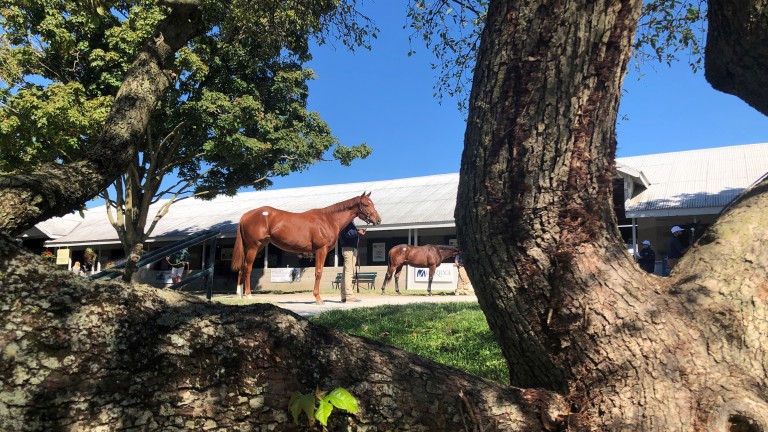 The keynote Keeneland auction is moving into its second week
Keeneland photo/Z
1 of 1
By Meredith Daugherty of BloodHorse 10:20AM, SEP 22 2020

Sunday's session of the Keeneland September Yearling Sale continued to be heavily shopped by buyers and experienced solid trade as the auction prepared to enter its second week.

Topping Sunday's session was a filly by Adena Springs Kentucky's Ghostzapper out of the stakes-winning Outflanker mare Saxet Heights. Purchased for $210,000 by C.J. Thoroughbreds, the filly was bred in Kentucky by SF Bloodstock and consigned by Woods Edge Farm, agent.

The filly had been purchased as a weanling during the Keeneland November Breeding Stock Sale for $130,000 in the name of Rocco Bloodstock. Connections buying with C.J. Thoroughbreds said the filly had the right kind of size and scope they had been looking for and that while the price was slightly above what they had been expecting to pay, it still fell well within their range for purchase.

Three yearlings shared the day's second-highest price of $190,000, beginning with a colt by Hill 'n' Dale Farms stallion Maclean's Music. Consigned by Summerfield, agent for Stonestreet Bred & Raised, the bay yearling is out of the Yes It's True mare Yes Liz, who ran second in the Sorority Stakes. 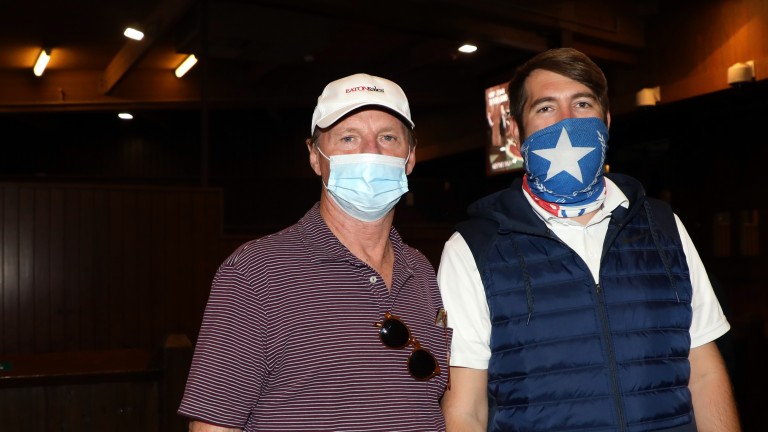 "We're very pleased with what he brought," said Andrew Vanlangendonck of Summerfield. "We had him pegged around that price range. As you get down in the books, the prices go down as well.

"We thought he was very well placed. He was a very standout physical and by a sire that is having a good turnaround. Hopefully, he'll do well in the future. Once again, it's another Stonestreet horse. It's incredible the programme they have and what kind of horseflesh they're able to push out to all the consignors that are lucky enough to sell for them."

Acting as agent, trainer Kenny McPeek signed for a colt by Lane's End sire Unified  out of the Unbridled's Song mare Song of Solomon. Consigned by Legacy Bloodstock, the colt was bred in Kentucky by Two Hearts Farm II.

"He was just an awesome horse," said Tommy Eastham of Legacy. "I have been really lucky. I had an Into Mischief filly in Book 3, and this horse that never cheated me. Tony Braddock raises an incredible horse. He produces good, well-mannered horses and has a great crew.

"The horse himself, mentally, is one of those that every time someone looked at him, they said he looked better than the last time. Even through the scoping and everything he had to go through, he was a gentleman the whole time.

"One of the things I liked about him the most is that he was always a horse that when I evaluated him every month, he had a great length of bone but he didn't have a lot of mass until about August. August was when he really came into himself, and I think there is a ton of upside for him going to Kenny and his owners because he's just now getting to be himself."

McPeek signed for three other yearlings Sunday, bringing his total to 18 overall. Total receipts for the horses come to $2,304,000.

Rounding out the trio of $190,000 yearlings was another Unified colt, consigned by Michael and Julia O'Quinn, agent. Bred in Kentucky by Gatewood Bell, the colt is out of stakes winner Promise Me a Cat (by D'wildcat) and was purchased by Redwings.

With prices experiencing a decline as the latter half of the sale begins, consignors and buyers alike said it was impossible to deny the impact the Covid-19 crisis has had on the market and would continue to have on the market at every stage going forward.

"It's a different ballgame," Vanlangendonck said. "I think a lot of us got comfortable in the earlier books thinking it might not be the way it's turning out to be, but I know that many consignors may have had a different experience today. 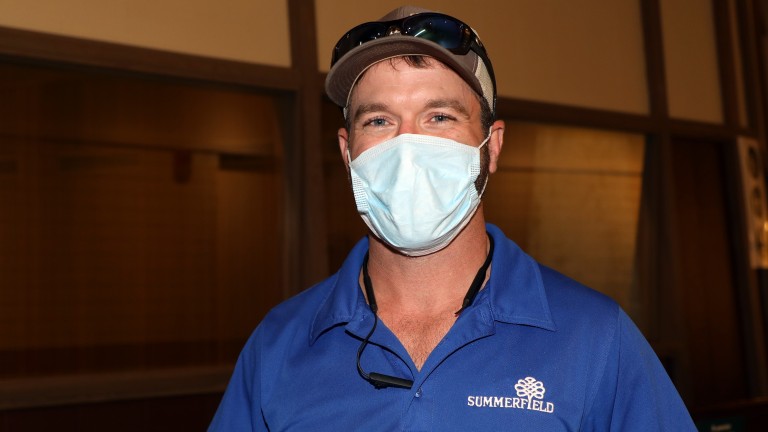 "It seems to be a lot more selective, and I know the two-year-old pinhookers are a big part of the middle market and they're coming back from the year they had. They're making more selective choices and they're looking for as close to a sure thing as you can get."

"I think we've had to adjust a little bit, and we're getting our information a little differently. The videos Keeneland have done have been great to get more participation, but as consignors, we've had to really adapt and learn more about technology since most of us are farmers. Maybe it's a good thing in the long run."

Bloodstock agent Davant Latham, who has both bought and sold several horses during the opening books, said that while the sale was definitely a buyer's market, it's important to considering the long-lasting effects the industry will face in the wake of a stunted economy.

"We've been fortunate to have a very good sale, but I think this is what we expected would happen," Latham said. "But it's a very tough time to be a breeder. That's very bad for our industry overall. We need breeders, and we need them to make enough money to not only survive, but to want to continue breeding. We all depend on each other. I don't care who you are, this impacts your game.

"I hope that the stallion farms are paying attention to this market and that they will adjust their fees accordingly, or at least throw some kind of rescue net out to breeders, because they're the ones that really take the risk. If stallion farms don't respond, there won't be breeders and they won't be able to sell seasons. We all have to look at the big picture going forward."

FIRST PUBLISHED 10:20AM, SEP 22 2020
It's incredible the programme they have and what kind of horseflesh they're able to push out to all the consignors that are lucky enough to sell