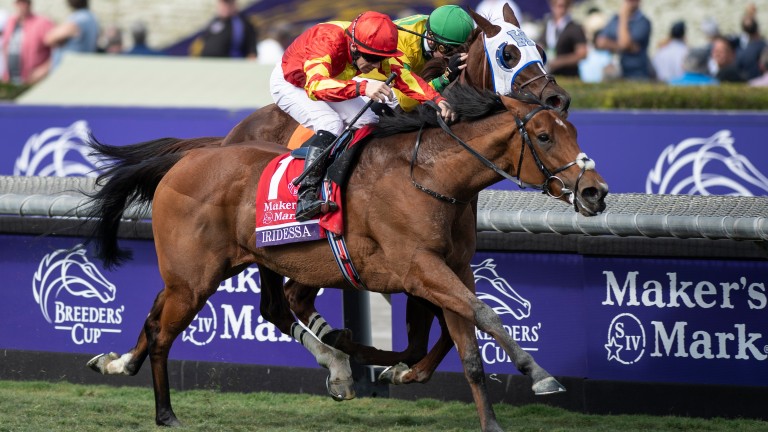 Four-time Group 1 winner Iridessa has reportedly been retired after sustaining an injury and has been sold on for a breeding career in Japan.

Owned by Chantal Regalado-Gonzalez, the four-year-old has been a flag-bearer for her sire, Ruler Of The World, and has had a knack of causing upsets in big races for Joseph O'Brien.

Bred by the trainer's family under the Whisperview Trading banner, Iridessa took the Fillies' Mile as a juvenile and at three, beat Magic Wand in the Pretty Polly Stakes and Hermosa in the Matron.

She rounded off a busy 2019 by taking the Breeders' Cup Filly & Mare Turf at Santa Anita.

A spokesperson for the owner told EBN: "Unfortunately, we received devastating news from Ireland on Thursday. Iridessa had struck into herself while in her box and caused damage to a tendon.

"It could have been a lot worse but it is bad enough to put her out of action for a long time, possibly a year, and, even given a full recovery, Joseph O’Brien advised us that it would be less than certain that she could regain her best form.

"The decision to retire her has therefore already been made, and a sale to Japan agreed. This has all happened very quickly, within 24 hours in fact, and I’m so pleased she will go to a top breeder, while at the same time disappointed.

"Iridessa really matured last year, her win at the Breeders’ Cup was the icing on the cake, and we were hoping she would do to the boys what she did to the fillies last year."

FIRST PUBLISHED 11:06AM, FEB 8 2020
It could have been a lot worse but it is bad enough to put her out of action for a long time