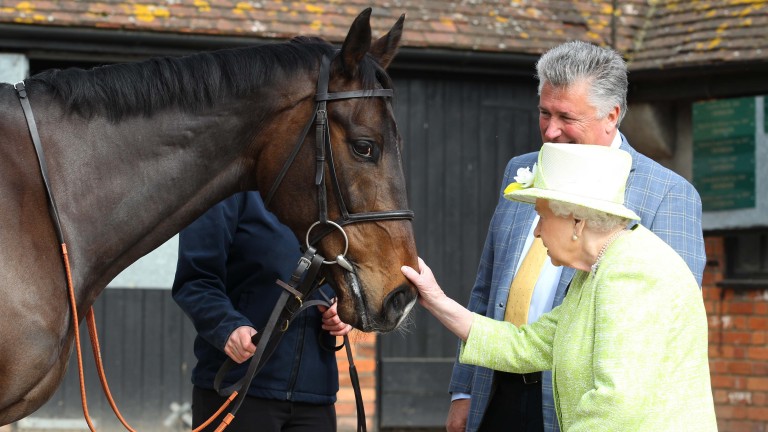 Paolo, the three-year-old half-brother to popular jumper Frodon, looks a name to remember judging by his convincing victory on debut at Fontainebleau on Tuesday.

The gelding, trained by Francois Nicolle and partnered by Gaetan Masure, was always travelling well in the Prix Tremaille, a hurdles race at around 2m2f, and expended little effort in taking up the running and surging clear.

Although he needed some urging to shake off the persistent attention of runner-up Gulliver Nellerie (a Guillaume Macaire-trained son of Nicaron) in the home straight, he eventually scored a shade cosily by one and three-quarters of a length.

The pair stretched 18 lengths clear of the third Kingsman, an entire son of Soldier Hollow also sent out by Macaire.

Paolo is owned by Lynne MacLennan, whose silks have been carried by the likes of Michael Scudamore's useful sorts Dan Emmett and Mysteree as well as French Graded-winning jumpers Bon Augure and Highway To Hell.

He was originally a €41,000 foal purchase by Highflyer Bloodstock from the Arqana December Sale, and was resold by Goldford Stud for €60,000 in a private transaction at the auction house's Summer Sale last year.

Paolo was bred by Philippe Gasdoue and is the fourth foal out of the winning Country Reel mare Miss Country, a half-sister to Alan King's former stable star Medermit, whose roll of honour included the Scilly Isles Novice Chase and Haldon Gold Cup. He was also a neck second in the Supreme Novices' Hurdle.

The first foal out of Miss Country is Frodon (by Nickname), a winner at Auteuil for Macaire who has won 12 races since joining Paul Nicholls, including the Old Roan Chase, Caspian Caviar Gold Cup, Cotswold Chase and Ryanair Chase in the 2018/19 jumps season. He has finished third in the Old Roan and the Betfair Chase in his two starts this term.

The dam's second and third foals Tidjy (by Slickly) and Sao (by Great Pretender) were further jumps winners in France, with Sao having also moved to Nicholls but yet to win in Britain.

Paolo's victory holds significance for British and Irish jumps breeders as Miss Country was sold to Pierre Boulard for €135,000 at the Arqana Summer Sale in 2017 and is now being bred from by Jared Sullivan, who has welcomed a Kapgarde filly, now a yearling, out of her along with a Kayf Tara colt foal. The mare returned to Overbury Stud for another cover by Kayf Tara this year.

Furthermore, Paolo's sire Great Pretender, a son of King's Theatre who has supplied stars such as Benie Des Dieux, Great Field and Ptit Zig, stood at Yorton Farm Stud for one season in 2014 before moving to Haras de la Hetraie.

Great Pretender's sole British-conceived crop numbers 43 foals now aged four and it has yielded two bumper winners in It's Probably Me and Stoner's Choice, as well as Le Cameleon, a close third in a Ffos Las novice hurdle this month.

The sire already has three winners among his French-conceived three-year-olds, which goes to show how trainers in France kick on with young jumps stock more readily than their peers across the Channel.

FIRST PUBLISHED 6:39PM, NOV 26 2019
Paolo is owned by Lynne MacLennan, whose silks have been carried by the likes of Michael Scudamore's useful sorts Dan Emmett and Mysteree