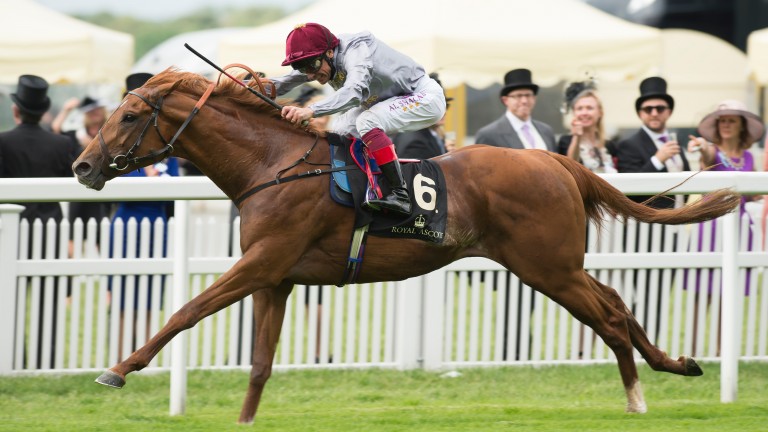 Galileo Gold: off the mark thanks to former trainer Hugo Palmer
Edward Whitaker
1 of 1
By Kitty Trice 6:47PM, MAY 15 2021

Galileo Gold and old ally Hugo Palmer teamed up to provide the Tally-Ho sire with his first individual winner when Ebro River did the business at Doncaster on Saturday.

Sporting the Al Shaqab Racing colours, just like his sire, the colt was a respectable sixth behind Forca Brasil on his debut and came home a length in front of the El Kabeir filly Kyber Crystal.

Bred by Tally-Ho, the two-year-old was a 75,000gns purchase from Book 2 of the Tattersalls October Yearling Sale to Charlie Gordon-Watson and Al Shaqab.

He is the third foal out of the Belmont mare Soft Power, a half-sister to Girl Power, the dam of Diamond Jubilee and July Cup-winning sprinter Slade Power.

Galileo Gold proved a top-class performer on the track, winning the Vintage Stakes and finishing third to Ultra in the Prix Jean-Luc Lagardere at two. He followed that at three with success in the Qipco 2,000 Guineas, and for good measure added the St James's Palace Stakes to his tally.

The son of Paco Boy, who was also runner-up in the Irish 2,000 Guineas and Sussex Stakes, was bred by Brian O'Rourke and sold to Amanda Skiffington for €33,000 at the Tattersalls Ireland September Yearling Sale.

He initially raced in the colours of Colin Murfitt until he was purchased by Al Shaqab in July 2015. The eight-year-old stands for a fee of €5,000 and has 110 first-crop two-year-olds to represent him this term.