Ollie O'Donoghue catches up with the buyers on day four 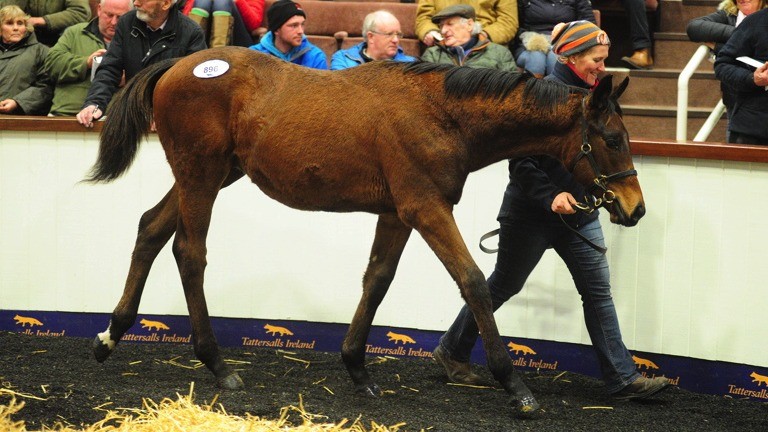 The Flemensfirth colt out of Morning Supreme takes his turn in the ring
Pat Healy / Tattersalls Ireland
1 of 1
UPDATED 6:14PM, NOV 14 2019

The sustained demand for Flemensfirth foals fed through to the third foal session of the Tattersalls Ireland November National Hunt Sale on Wednesday, with Lenny Walker emerging on top following a drawn out bidding war with John Nallen for the colt out of the Listed novice hurdle winner Morning Supreme.

Consigned by Ballincurrig House Stud on behalf of Ashroe Stud, the April foal is now a sibling to two winners after his Milan half-brother Dancing On My Own won a Wexford maiden hurdle by 28 lengths since the catalogue was published, earning a Racing Post Rating of 138.

Once the €80,000 mark had been reached, the bidding crept up slowly in increments of €2,000, and at one stage auctioneer Alastair Pim had all but brought his gavel down when Nallen signalled yet another bid from the bottom of the stairs, though it was Walker who ultimately had the last say at €88,000. 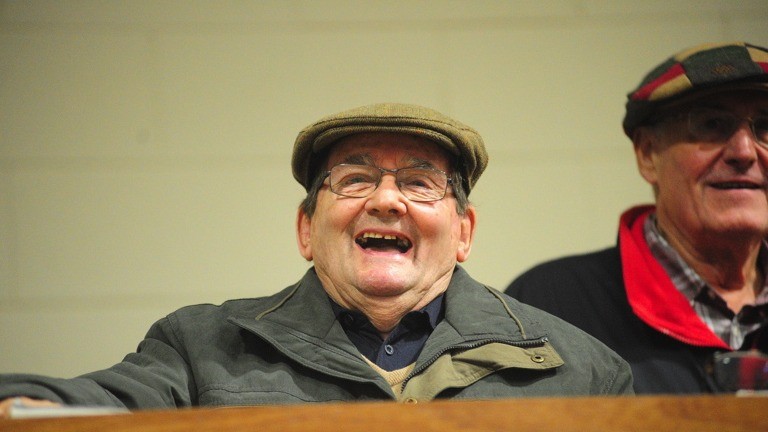 "I was going to go out at €70,000," admitted Walker, from his position on the upper walkway. "It was only that Alastair had bought me breakfast this morning that I decided to put in a few extra bids!"

Among Walker's previous pinhooking touches was the Arkle Chase winner Captain Chris, having bought the son of King's Theatre for €66,000 at the 2004 November Sale before reselling him for €250,000 at the 2007 Tattersalls Ireland Derby Sale.

Adrian Costello of Park Farm also went to €85,000 earlier in the piece for a February-foaled colt by the Beeches Stud resident out of Blue Maxi from Yellowford Farm.

The colt's dam is a closely related half-sister to the Albert Bartlett Spa Novices' Hurdle runner-up African Gold, while Kylemore Lough and Nolans Pride appear further down the page.

"He's by Flemensfirth out of an unraced Milan mare, who in turn is out of a daughter of Presenting," said Costello. "He's a gorgeous horse and will come back as a three-year-old."

Flemensfirth fillies have also proved a hit with buyers at the November Sale this week.

Peter Molony of Rathmore Stud went to €88,000 for the full-sister to Tornado Flyer on Tuesday, while Jane Mangan made a winning bid of €62,000 for the filly out of Old Moon on Wednesday.

The January foal is a full-sister to Noble Endeavor and Minella Daddy, and is the last of 13 consecutive foals by Flemensfirth out of the mare.

"She's been bought for MV Magnier," said Mangan, who was stood on the upper walkway. "She's a lovely sort and Old Moon is one of the best National Hunt mares there is."

Hillman back in business

Tattersalls Ireland representative Timmy Hillman also got in on the action when signing on the dotted line at €72,000 for Grange Hill Stud's Walk In The Park colt out of Poppy Baloo, an Oscar full-sister to the dual Aintree Hurdle winner Oscar Whisky.

"We sent Poppy Baloo to Walk In The Park because he's been such a good sire," said Mark Hanly of Grange Hill Stud. "We've the two-year-old full-sister and hope to bring her to the Derby Sale."

Intriguingly, the March foal is inbred 3x3 to Sadler's Wells, the same pattern as this year's Triumph Hurdle winner Pentland Hills (by Motivator out of a Galileo mare), dual Grand National hero Tiger Roll (by Authorized out of an Entrepreneur mare), and the ill-fated Sir Erec (by Camelot out of a Galileo mare), with all four by stallion sons of Montjeu.

Two siblings to Grade 1 winners by the Grange Stud-based sire were also well received on Wednesday, with Kevin Ross and Ben Case landing the April-foaled half-brother to Monalee from Ballincurrig House Stud for €65,000, and the duo indicated that he will return for the 2022 store sales.

Another to prove popular was the half-brother to the ill-fated Queen Mother Champion Chase hero Special Tiara, who earned legions of fans as a two-mile chaser thanks to his front-running style.

The February foal was sent into the ring by Coolruss Stud on behalf of Eclipse Bloodstock and was knocked down to Richard Rohan for €64,000.

"He's the most lovely individual and his half-brother was a highly talented horse" said Rohan.

Milan colts all the fashion

Cleaboy Stud and Coppice Farm enjoyed a fine start to the day when selling a trio of Milan colts for a combined €109,000.

Of those, Johnny Collins of Brown Island Stables stretched to €40,000 for a March foal out of the three-time winner Dahara, a half-sister to the Grade 1 chase winner Top Of The Sky.

Adrian Costello went to €35,000 for an April foal out of J'y Viens, a placed half-sister to the Grade 1 novice chase winner J'y Vole, who topped the 2011 November Sale when hammered down to Paul Murphy for €120,000 during the mare session.

Completing the trio was a May foal out of the Auteuil Listed hurdle winner Sylverture, who found favour with Woodville Farm at €34,000.

Milan has a live Cheltenham Gold Cup contender in Santini, who kicked off his season by winning the Listed Future Stars Intermediate Chase at Sandown on Sunday.

Date with the auctioneer for Limini

The five-day November Sale draws to a close on Thursday with a foal and mare session, and among the prized lots on offer is Cheltenham Festival scorer Limini (lot 1,137).

The Dawn Run Mares' Novices' Hurdle heroine will be preceded into the ring by her Willie Mullins-trained stablemate Camelia De Cotte (1,136), who achieved Grade 2 laurels over fences.

Both mares were covered in June by the dual Derby hero Australia, with his similarly credentialled studmate Camelot responsible for the priciest foal sold so far this week, the half-brother to Altior who went the way of Kevin Doyle for €155,000 on Tuesday.

FIRST PUBLISHED 8:24PM, NOV 13 2019
It was only that Alastair had bought me breakfast this morning that I decided to put in a few extra bids!