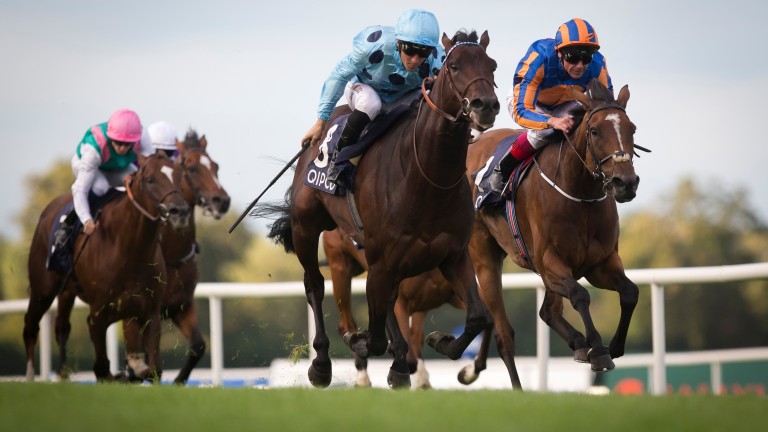 Plenty of eyes will be on the George Strawbridge homebred Natasha on her debut appearance at Kempton in Monday's mile fillies' maiden stakes, not least because the daughter of Frankel is a half-sister to the outstanding Almanzor.

The two-year-old is the seventh foal out of the unraced Maria's Mon mare Darkova - once a €16,000 purchase by Canirola Bloodstock from the Aga Khan Studs at the 2011 Arqana December Sale and later acquired by Strawbridge.

Almanzor, who raced in the colours of Ecurie Antonio Caro and Gerard Augustin-Normand, was bred by Haras D'Etreham and sold to Jean-Claude Rouget for €100,000 at the Arqana August Yearling Sale in 2014.

A three-time winner at two, including at Listed level, the colt blossomed after his seasonal reappearance third in the Prix de Fontainebleau when adding a first Group success to his name in the Prix de Guiche.

Due to a virus in the yard and a setback, Almanzor made his belated four-year-old debut in August of that year but could only manage fifth in the Prix Gontaut-Biron. He retired to stand at Haras d'Etreham for a fee of €35,000.

Having stood this year for €30,000, Almanzor has been represented by a winner in Faro De San Juan and three further placed runners to date from his first crop of two-year-olds, also causing plenty of interest with his young progeny being offered in the southern hemisphere.

Almanzor and his Frankel half-sister can also count Strawbridge's Group 3-placed Le Havre colt Another Sky among their siblings, while Almanzor's Wootton Bassett full sister Troarn was a Listed-placed scorer for Rouget.

Strawbridge will also be represented by the Andrew Balding-trained Speak, by Sea The Moon and out of a Prix Miesque winner in Slickly mare Lixirova.

FIRST PUBLISHED 10:49AM, AUG 1 2021
He then went on to clear-cut Classic success when defeating the regally bred Aga Khan colt Zarak in the Prix du Jockey Club