James Thomas reports from the headline session at Park Paddocks 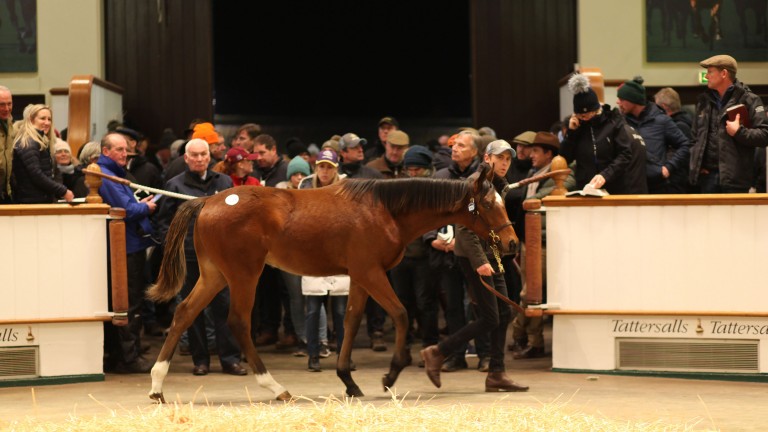 The Frankel colt out of Simple Verse makes his way around the packed Park Paddocks ring
Laura Green
1 of 1
8:00PM, NOV 29 2019

High street and online retailers may have dropped their prices to tempt Black Friday bargain hunters, but, after a surge of big spenders descended on Tattersalls, the market at Friday's session of the December Foal Sale went markedly in the opposite direction.

Rare offerings were plentiful during the headline chapter of the four-day sale, and none proved more in demand than the Frankel colt out of two-time Group 1 winner Simple Verse, who was offered by Tweenhills Farm and Stud.

A packed Park Paddocks auditorium looked on as the regally bred youngster made his way around the ring, as Longview Stud's Eugene Daly and John Gunther, standing on the rope with his daughter Tanya, traded six-figure bids.

At the 600,000gns mark the gavel came down in favour of Gunther, but, having signed the sale-topping docket, the US Triple Crown-winning breeder revealed he had been acting on behalf of Tweenhills' David Redvers. The colt was bred by a partnership including Sheikh Fahad and Redvers explained that the Qatar Racing chairman had bought out his fellow breeders.

"John was very kindly bidding on behalf of me as Sheikh Fahad wanted to buy out his brother," explained Redvers. "Obviously, as the horse was being sold through Tweenhills, I couldn't be seen to be bidding myself, but John stepped in and did me a favour.

"Sheikh Fahad owns the mare in partnership with his brother, Sheikh Suhaim, and a chap called Mohammed Al Kubaisi. They didn't really want to keep Simple Verse to breed from her but Sheikh Fahad talked them into it on the understanding that they sold the foals - that's why the foal is here." 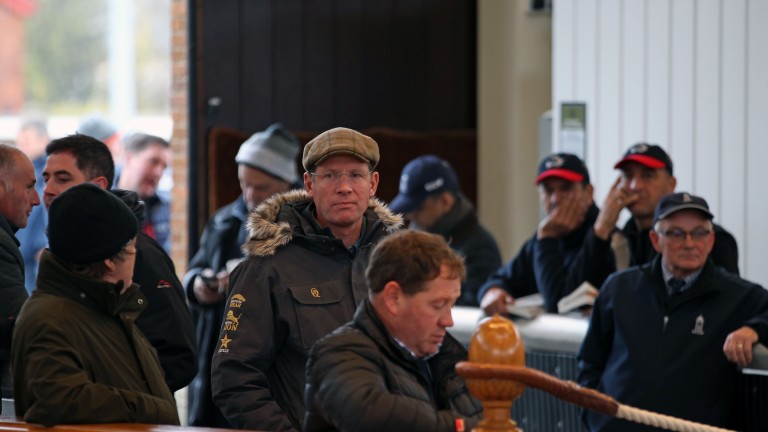 David Redvers: "To be honest, I wasn't sure if Sheikh Fahad was planning on buying the partners out"
Laura Green
Simple Verse joined the Qatar Racing fold having been bought by Redvers for €240,000 as a yearling. Under the ownership of the partners, the daughter of Duke Of Marmalade landed the St Leger and British Champions Fillies and Mares Stakes during a fruitful three-year-old campaign.

"She was our first domestic Classic winner and she won on Champions Day, which was very special for the Al Thani family as they sponsor the event," continued Redvers. "She's just a wonderful mare to be around. She's in foal to Roaring Lion. She looks amazing and that's one of our most eagerly awaited foals."

Redvers also revealed that the sheikh hadn't stated his interest in buying the colt until the hours before the sale, having spent the week with his newly born daughter Najla, who arrived on Wednesday.

"To be honest, I wasn't sure if Sheikh Fahad was planning on buying the partners out until he came to see the foal here this evening," he said. "He's just had a baby girl so he's run away from his daughter and wife for the first time to see this colt!"

Buyers from the US made a sizeable impression on the market during the October Yearling Sale, and that trend continued on Friday as the Florida-based Woodford Thoroughbreds went on a spending spree.

Topping the lengthy list of purchases was the Invincible Spirit filly out of Liscune offered by Bryanstown House Stud. John Sykes and Lincoln Collins weren't alone in their pursuit of the sister to Group winners Music Box and Ektihaam, as they were forced as far as 440,000gns to see off Camas Park Stud's Tim Hyde.

"I don't know whether she'll come back to the sales or not," said Collins. "But with a filly like that you have more options. She was expensive but we really like her and she's got a pedigree we really like too - she has the sort of pedigree we'd like in our broodmare band, so we have that option." 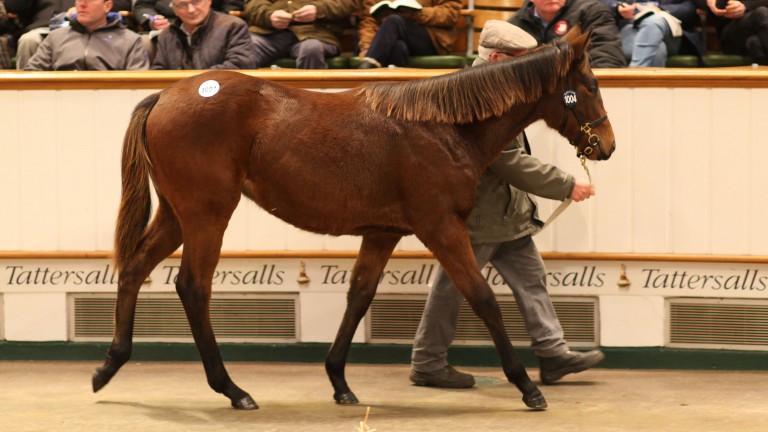 The Invincible Spirit filly out of Liscune brings 440,000gns from Woodford Thoroughbreds
Laura Green
Collins and Sykes also went to 400,000gns for the Sea The Stars filly out of Amazone offered by Castletown Stud. The filly boasted a major pedigree update, as her dam is a sibling to the dam of Alson, winner of the Group 1 Criterium International since the publication of the catalogue.

Earlier in the session, team Woodford Thoroughbreds went to 230,000gns for the Lope De Vega colt out of Freedom March consigned by Ballyreddin and Kellsgrange Studs. 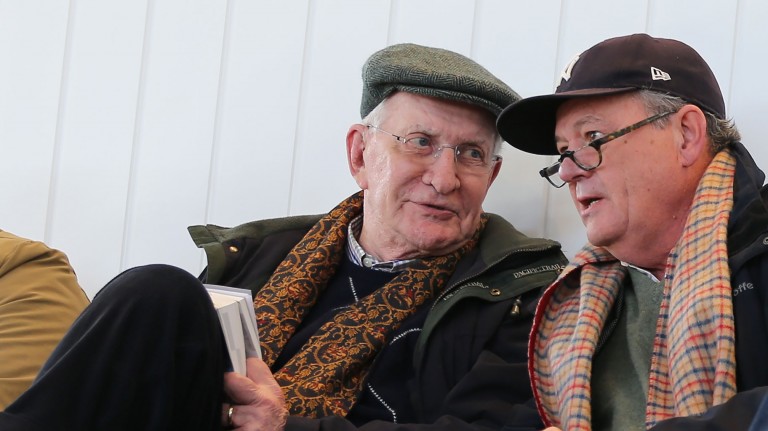 John Sykes and agent Lincoln Collins
Laura Green
"He'll go to Mount Coote for now and then he'll probably be reoffered next year, either here or in America," said Collins.

"The sire is popular with Americans, obviously Chad Brown has done well with his progeny. He's a lovely horse, needless to say it was more than we wanted to pay but I think all the big pinhookers were on him and we've just managed to outlast them.

"As for Woodford Thoroughbreds, our operations have mostly been confined to the US - with the exception of buying a few here - but Mr Sykes and myself are very keen on international diversification," added Collins.

Also taking an international approach was Gestut Etzean, and the German farm was rewarded for bringing its Kingman colt out of Monami to Tattersalls when Mick Flanagan struck a winning bid of 340,000gns on behalf of Baroda Stud.

The colt is not the first progeny of the Group 2-winning Monami to make a splash in the sales ring, as her Sea The Stars filly Miss Yoda, a dual winner for John Gosden, topped the 2018 BBAG yearling sale at €280,000 when bought by Westerberg through Blandford Bloodstock.

Baroda's David Cox will be hoping further sales ring success awaits, as he indicated that the colt would be reoffered at next year's yearling sales. He said: "The colt's dam was a very good racehorse and his half-sister, Miss Yoda, looks as though she's coming good - she could still be anything. We've had some luck with Kingman before too as we sold his son Roseman to Roger Varian for €650,000."

Anthony Stroud was active on a host of the day's bigger lots, and emerged victorious on the Oasis Dream colt out of Besotted offered by Knocktoran Stud after a bid of 320,000gns was struck on behalf of Godolphin.

The colt boasts a page chock full of bold black type, the majority of which can be found under the third dam Mill Princess, dam of Last Tycoon and ancestress of major talents such as Immortal Verse, Sense Of Style and the Group 1-winning siblings Hydrangea and Hermosa.

Despite such a blue-blooded pedigree, Knocktoran's Brendan Hayes said the colt's price had surpassed all expectations. He said: "It was way beyond what we expected, we thought he might make 150,000gns on a good day."

Knocktoran raced the dam, whose career on the track included victory at Listed level. Hayes added: "We bred and raced Besotted, she was quite good, and it's a family we know very well, we bred almost all the horses on the page. Knowing the family is such a big advantage.

"We had Mill Princess, she was bought from Moyglare and bred Last Tycoon and Astronef. We sold some of her daughters, Coolmore got Beauty Is Truth. It's a fantastic family that just keeps coming up with Group 1 winners. It's a family that's had Group 1 winners over six furlongs and a mile and a half."

Hayes has kept to a tried and tested route with Besotted's 2019 covering, having gone to Cheveley Park Stud stalwart Pivotal. He said: "Besotted is in foal to Pivotal and carrying a filly and is visiting Siyouni next year. Having her in foal to Pivotal is very pleasing as he's done so well with this family; Immortal Verse is by Pivotal, so are Go Lovely Rose and Beauty Is Truth. And of course he's a brilliant broodmare sire."

John Berry might be better known for his exploits with the likes of popular Brighton specialist Roy Rocket, but the Newmarket trainer proved he's got quite an eye for a broodmare too, as the Kingman colt out of Patsy Boyne fetched 300,000gns from Jose Hormaeche, acting on behalf of Spanish outfit Wallhouse Slu.

Berry purchased Patsy Boyne on behalf of Eric Chen for 300,000gns at the 2018 December Mares Sale, when the Galileo sibling to High Chaparral was carrying the Kingman colt in utero.

The foal was consigned by Liam and Jenny Norris, and after the docket had been signed the former said: "I'm delighted and I have to say fair play to John Berry as he gave 300,000gns for the mare and got it back in one go. He's a lovely big, scopey foal - we foaled him at home and he's never put a foot wrong. 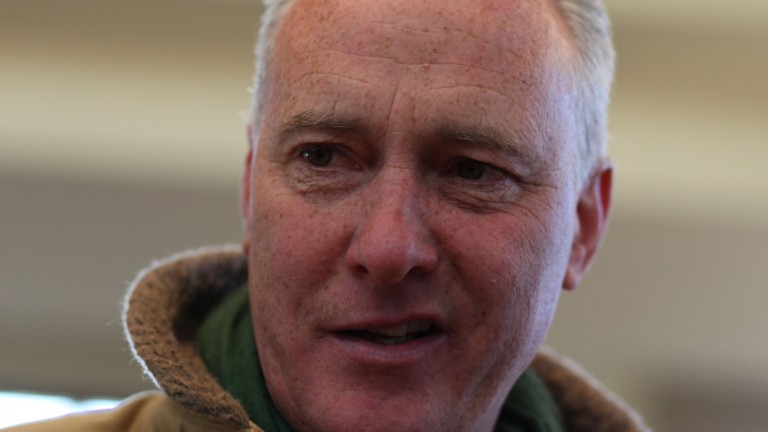 Liam Norris: "I have to say fair play to John Berry"
Laura Green
"The mare is still with us. She's back in foal to Kingman on a southern hemisphere time covering and she'll head to Australia around Christmas time. I was always hopeful coming here as I've absolutely loved this colt from day one.

"When John said the mare was going back to Australia and that I could bring the foal to the sales I thought 'happy days' as there's nothing like bringing a nice foal up here. He's a real star."

Bloodstock agent Jose Hormaeche, who had to see off underbidder Gearoid Costelloe from his seat next to the rostrum, said: "He's gorgeous and is coming to Spain. He has been bought by a group of Spanish owners, though plans are fluid - we might bring him back here to sell or we might keep him to race."

McAteer on the mark

It wasn't all about the big-hitters during Friday's session, as Ballycrighaun Stud's John McAteer saw Tim Hyde of Camas Park go to 190,000gns for the Churchill colt out of his first broodmare purchase, Tanyeli.

McAteer paid €25,000 for the daughter of Mastercraftsman back in 2015, and, having received a host of congratulations, said: "I bought her as a maiden mare in foal to Pour Moi. He's turned out to be a nice three-year-old, along with the two-year-old Speed Merchant, so it's a pedigree in its infancy that's already proving to be successful."

Foals from the debut crop of Churchill have been subject to some rave reviews, and when asked what had prompted the decision to mate Tanyeli with the son of Galileo, McAteer said: "Obviously Galileo over Danehill Dancer has been a fantastic cross over the years, and the American influences in Churchill's pedigree - with Storm Cat and Miswaki - pairs lovely with Kris S.

"Mastercraftsman's already had a good year as a broodmare sire too, with Loving Gaby winning a Group 1 in Australia. It's worked out great; he was bred to be a handsome individual and he's turned out to be just that. Please god he'll turn out to be a racehorse too."

While Tanyeli may have been the first producer McAteer purchased, his burgeoning broodmare band has since increased.

"I have three mares at home now, though this mare would be the gem amongst them," he said. "She's a young mare and she's after having four lovely foals for me so I've reinvested in a nice covering by Zoffany."

The December Foal Sale concludes on Saturday with a session starting at 10am.

FIRST PUBLISHED 8:00PM, NOV 29 2019
They didn't really want to keep Simple Verse to breed from her but Sheikh Fahad talked them into it