The Newsells Park Stud sire is responsible for Enable, Channel and God Given 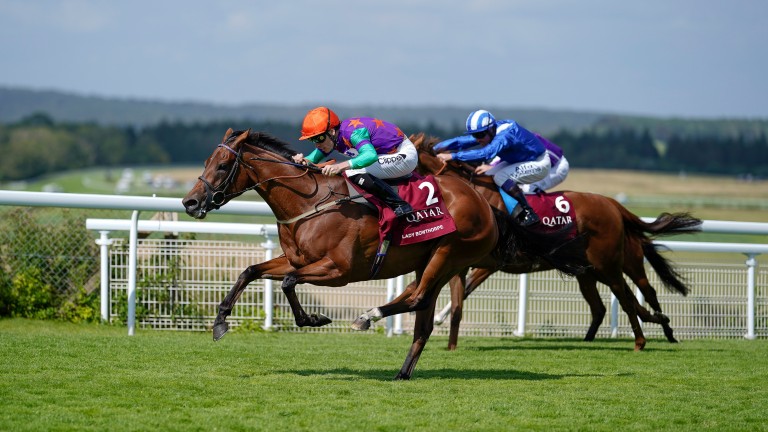 Frankel's former sparring partner Nathaniel could not let the red-hot Banstead Manor Stud resident get away with all the Group 1 fun this summer, and his Lady Bowthorpe was rewarded for her admirable efforts with a deserved win in the Qatar Nassau Stakes.

The five-year-old had come close to top-level success before, most notably when second to Palace Pier in the Lockinge and when a fast finishing fourth to Snow Lantern in the Falmouth Stakes this month.

Bred by Scuderia Archi Romani, Lady Bowthorpe is the second foal out of Maglietta Fina, a multiple winning daughter of Verglas and Kingmambo mare Whipped Queen who failed to sell at 10,000gns at the 2013 Tattersalls December Mare Sale.

Lady Bowthorpe is a half-sister to two stakes performers in the multiple Group-winning Greenlands Stakes scorer Speak In Colours, a son of Excelebration, and the Listed-placed Brazen Beau filly Pretty In Grey.

Sold for 82,000gns by John Troy to James Toller at Book 2 of the Tattersalls October Yearling Sale, the William Jarvis-trained mare can also count the prolific Tullius among her family. The multiple Group winner is a half-brother to her dam, who produced a Holy Roman Emperor filly foal this term and is in foal to Kingman.

Redpender Stud, meanwhile, had recently been among the headlines courtesy of Happy Romance's Hackwood Stakes victory at Newbury and the County Kilkenny operation came to the fore again at Goodwood on Thursday courtesy of Asymmetric's Group 2 Richmond Stakes victory.

The son of Showcasing was withdrawn from Tattersalls Book 1 but was then sold to Opulence and Richard Ryan for 65,000gns at the December Foal Sale. 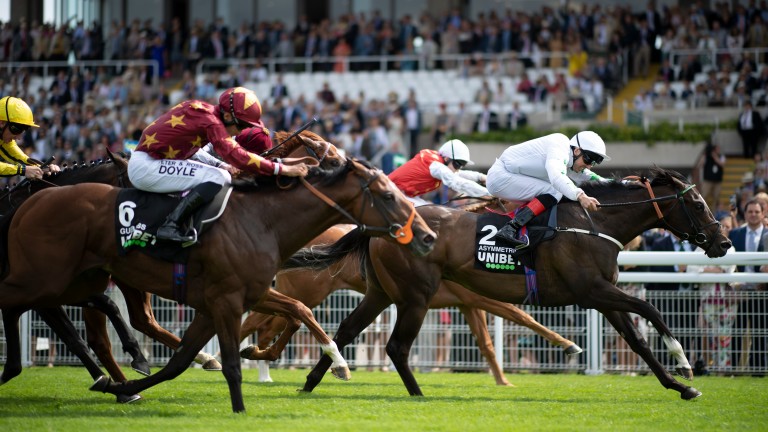 Subsequently a 150,000gns purchase by Stephen Hillen at the Craven Breeze-Up Sale in April, the colt is the first foal out of the dual winning Hellvelyn mare Swirral Edge.

Swirral Edge is a half-sister to the Listed winner Fashion Queen - a daughter of another son of Oasis Dream in Aqlaam - and a half-sister to two Group scorers in Flying Childers Stakes victress Wunders Dream and Ridgewood Pearl Stakes winner Grecian Dancer.

Eight-year-old Swirral Edge, who was a private purchase by Redpender, has a yearling colt by Gleneagles and was covered by Acclamation this term.

Asymmetric had won his first two starts for owner Leora Judah before going down by a narrow margin in the July Stakes to Al Shaqab's Lusail at Newmarket's July meeting.

Excelebration colt Ottoman Emperor continued his rise up the ranks with a gritty staying performance in the Group 3 Gordon Stakes.

Bred by Castletown and Minch Bloodstock, the three-year-old is the first foal out of German winner Ibiza Empress, a Tertullian half-sister to Princess Royal Nayef Stakes runner-up Pleasant Surprise. The pair hail from a family that includes German 2,000 Guineas and Hong Kong Group 2 winner Irian.

O T I Racing's colt was picked up for just €7,500 by Leamore Horses from Brenda Shortt Bloodstock at the 2019 Goffs February Sale and was then sold privately following a barrier trial.

FIRST PUBLISHED 4:41PM, JUL 29 2021
She is a half-sister to two stakes performers in the multiple Group-winning Greenlands Stakes scorer Speak In Colours and Listed-placed Pretty In Grey