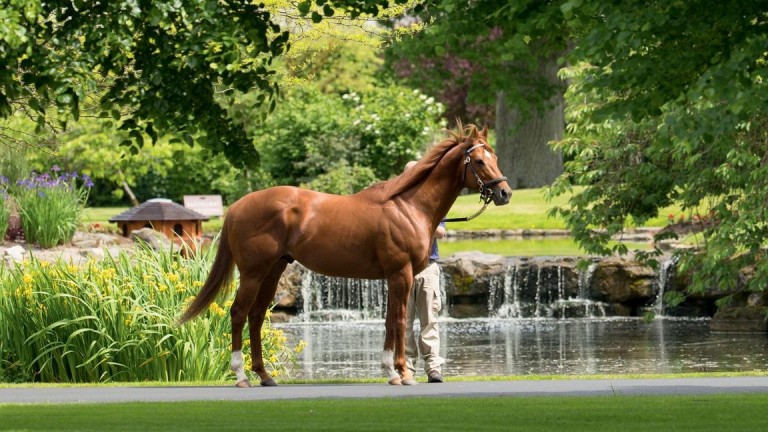 1. Jet Away among those whose popularity has taken off

Arctic Tack Stud resident Jet Away has never struggled for numbers, with the son of Cape Cross having covered three-figure books in each of the five previous seasons he has stood at the County Wexford operation.

However, in 2020 his popularity with National Hunt breeders soared, rising from a tally of 143 mares in 2019 to a whopping 288. This total saw Jet Away finish second only to Maxios in terms of popularity.

This may seem a little unusual for a stallion who remains largely unheralded, with his sole winner under rules, Punchestown bumper scorer Gordon's Jet, striking long after the covering season had drawn to a close. 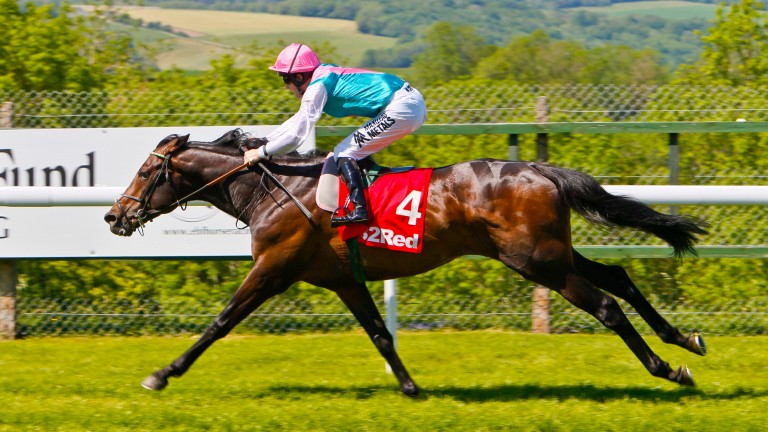 Jet Away: Arctic Tack stallion was the second-most popular sire in Britain or Ireland in 2020
Mark Cranham
But his success highlights the impact Irish point-to-points results can have on jumps breeders' thinking, with Jet Away's first crop of four-year-olds containing a flurry of winners between the flags.

He sired three winners from his first four runners earlier this year, with Brandy Love striking by eight lengths at Cragmore for Colin Bowe, Supreme Jet landing an Oldtown maiden for Patrick O'Farrell, and Denis Murphy's Bring The Action scoring at Tinahely by two lengths.

Those performances also reverberated in the sales ring too, with Brandy Love subsequently sold to Harold Kirk and Willie Mullins for £200,000. With such support behind him, it can only be a matter of time before we hear a lot more about Jet Away. 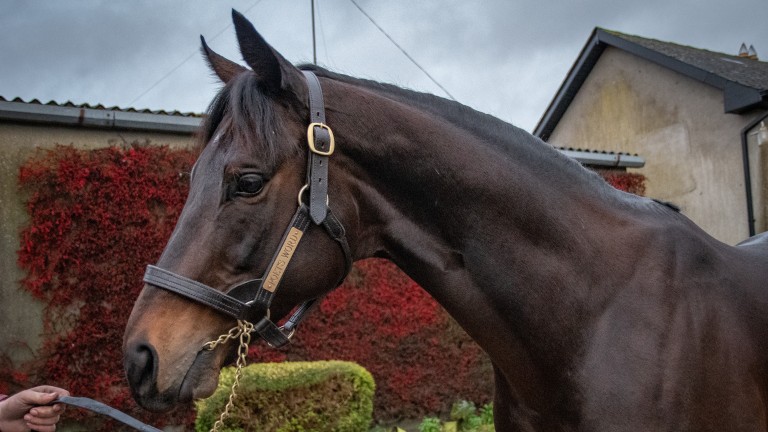 Poet's Word: Boardsmill Stud's new recruit covered a vastly increased book in 2020
Alex Cairns/ITM
Others who saw a major upsurge in popularity, driven by either racecourse success or a change of address, include dual Group 1 winner Poet's Word, who served 221 mares during his first season as a National Hunt stallion at Boardsmill Stud, up from just 30 during a sole season on Flat duty at Nunnery Stud. His latest book included the dams of Battleoverdoyen, Benefficient, Glen Forsa and No More Heroes.

Darley's rising star sire Night Of Thunder was reported to be heavily oversubscribed at a fee of just €25,000 after his first two-year-olds included 28 European winners and a record-equalling seven black- type scorers. That demand translated into a book of 213 mares, up from 106 the previous season.

The increase in quantity was mirrored by a rise in quality, with those 213 mares featuring 53 black-type winners (25 per cent), up from just eight (eight per cent) 12 months earlier. Among that number are the likes of Alexander Goldrun, Cassandra Go and Dolniya, as well as the dams of King Of Change, Precieuse, Slade Power and Was.

Although it has become the norm for the most popular stallions to cover gargantuan books of mares, the number of sires who covered a book of 200-plus dropped slightly in 2020 to 17, from 19 in 2019.

Topping the list was Maxios, who covered 298 mares in his debut season at Castlehyde Stud, having spent the first six years of his stallion career at Gestut Fahrhof in Germany. Maxios claimed the title from Soldier Of Fortune, who had been the most in demand stallion for the four preceding years. 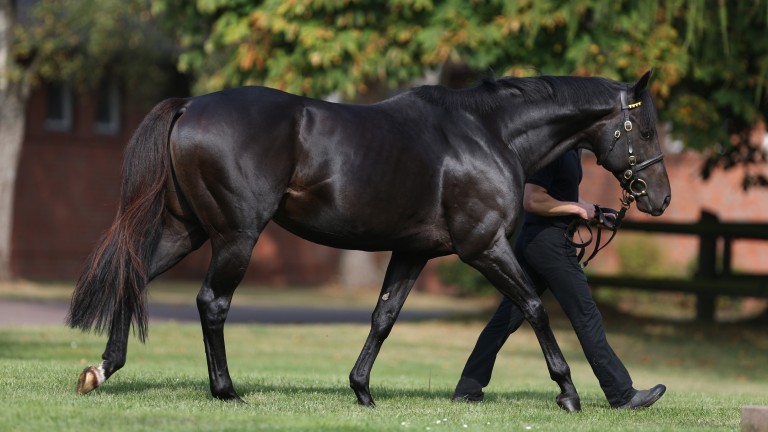 Maxios: Castlehyde Stud newcomer was the busiest sire in Britain and Ireland in 2020
Marc Ruehl
Next up was the aforementioned Jet Away, followed closely by Prince of Wales's Stakes hero Crystal Ocean, who covered 280 at the Beeches Stud under the care of father-son team Bobby and Robert McCarthy. The son of Sea The Stars rates a National Hunt recruit of extremely rare merit, and duly clocked in as the most popular new retiree to stud.

The most popular Flat stallion was Coolmore's Churchill, who covered 250 mares during this third season standing in Fethard. He sits just ahead of another son of Galileo in Order Of St George (247), who is followed by fellow Coolmore National Hunt stallions Getaway (242), Wings Of Eagles (241), Walk In The Park (235) and Soldier Of Fortune (224). 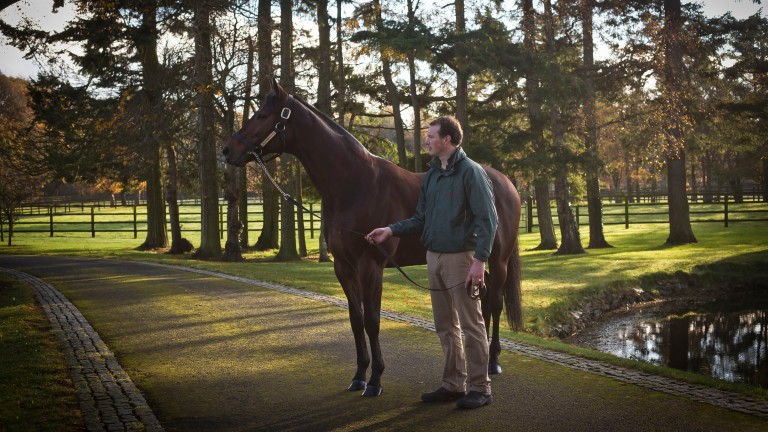 Although the number of stallions covering 200-plus mares may have dropped year-on-year, those 17 names still accounted for 3,991 mares between them - some 19 per cent of the 20,626 coverings recorded in the Return of Mares.

3. The new boys in demand

Among the hundreds of pages packed with tiny text in the Return of Mares, the first port of call for many breeders, agents and bloodstock buffs will be the index at the back containing the list of active stallions and their book sizes.

It is in this section that we learn the fate of the new recruits to stud, and plenty of those who covered their first mares in 2020 plainly caught breeders' imaginations in a big way.

The busiest new stallion was the aforementioned Crystal Ocean with his book of 280 mares, while two other newcomers also received more than 200 mares each, with Tally-Ho Stud's Inns Of Court on 218 and Coolmore's Ten Sovereigns close behind on 214. 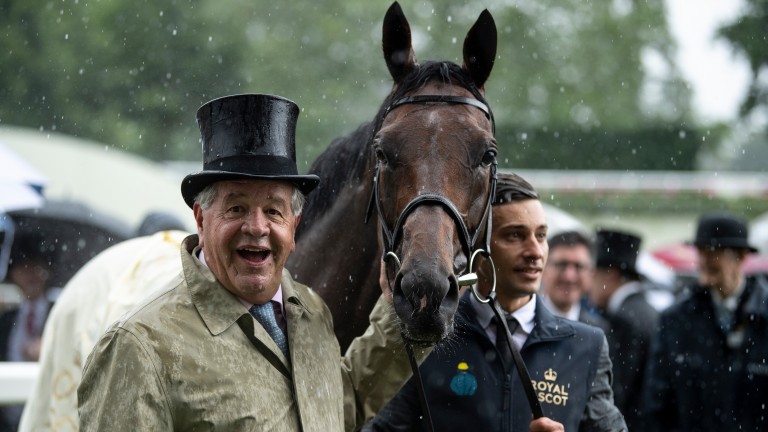 Over the seven seasons Camelot has spent at stud, the son of Montjeu has become a well-established source of high-class Flat runners. His roll of honour features 62 stakes performers, among which are six elite winners.

He has sired a Group 1-winning two-year-old in Criterium de Saint-Cloud victress Wonderment; a brace of Irish Classic winners, with Latrobe having won the Irish Derby and Even So taking the Irish Oaks; Athena gave him a Stateside Grade 1 victory in the Belmont Oaks Invitational; while Cox Plate hero Sir Dragonet and the northern hemisphere-bred Russian Camelot have ensured his influence has been felt at Group 1 level in Australia too.

Coverings registered in the Return of Mares also suggest that Camelot could be set to make a significant impact over jumps in the coming years too, with his 156-strong book in 2020 containing a small but highly select list of National Hunt talent. 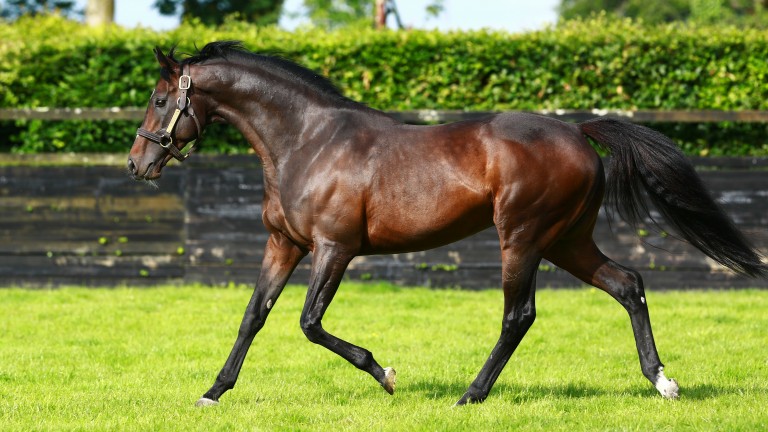 Camelot in his paddock at Coolmore
Coolmore
Chief among those names is the mighty Annie Power, winner of five Grade 1s, including the 2016 Champion Hurdle. The daughter of Shirocco has a yearling colt by Galileo and a colt foal by the same sire, the former registered as being bred by the Annie Power Partnership and the latter by Coolmore and Martinstown.

Annie Power has visited Camelot before, with her debut covering from the Derby winner in 2017, but she sadly lost the foal.

Other classy jumpers who visited Camelot in 2020 were Byerley Babe, Getaway Katie Mai, Jer's Girl, Kotkikova and Your Wan, all of whom ran in the colours of JP McManus, as well as Pakora, Papagana and the three-time Grade 1 winner Vroum Vroum Mag. 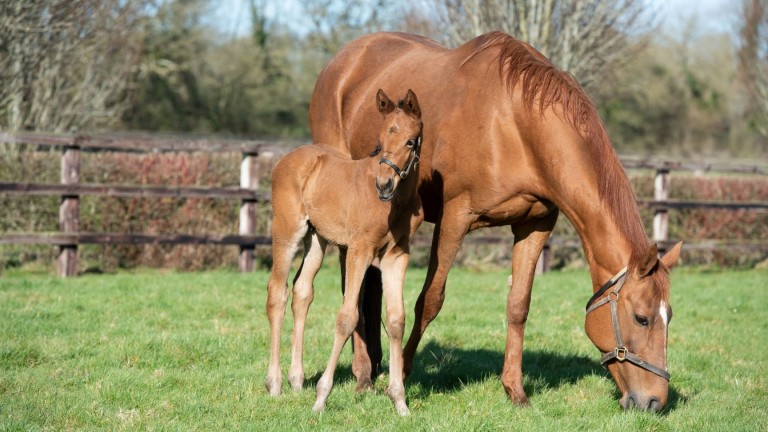 Annie Power with her second Galileo colt foal
Coolmore
It is, of course, nothing new that Coolmore would allow a select few National Hunt mares, either of their own or their associates, to visit one of their high-calibre Flat stallions, having done the same with Galileo and his own breed-shaping sire down the years.

Godolphin stunned the bloodstock world when landing the top lot at Book 1 of the Tattersalls October Yearling Sale in 2017. Not only was the filly in question by Galileo - her purchase coming in the year that Godolphin ended their self-imposed embargo on Coolmore stallions and their progeny - but she fetched a cool 4,000,000gns.

Clearly things have not gone to plan since, as the filly, catalogued as Gloam but subsequently renamed Maria Danilova, has failed to reach the racecourse, despite closing in on turning five. However, the filly always held considerable residual value as a breeding prospect, not only being by Galileo but as a daughter of Dank, winner of the Breeders' Cup Filly & Mare Turf in 2013. 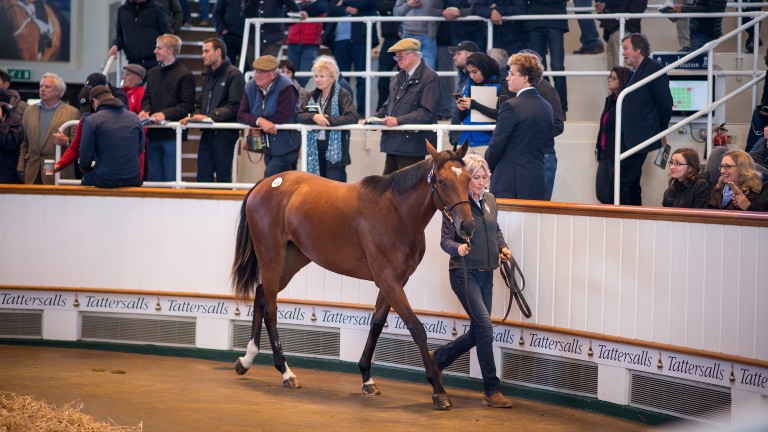 Maria Danilova in the Tattersalls ring, where she fetched 4,000,000gns
Edward Whitaker
In the aftermath of her sale, John Gosden, who took responsibility for bidding and training duties, said: "You very rarely have a filly of this quality come onto the market. She's by a great stallion and out of a phenomenal racemare. She's an outstanding physical example. For her racing future and her breeding future, she's a very exciting prospect."

And the Return of Mares reveals that Godolphin are indeed turning their attention to Maria Danilova's broodmare career, as she appears among the 155 mares who visited Darley's linchpin stallion Dubawi in 2020. 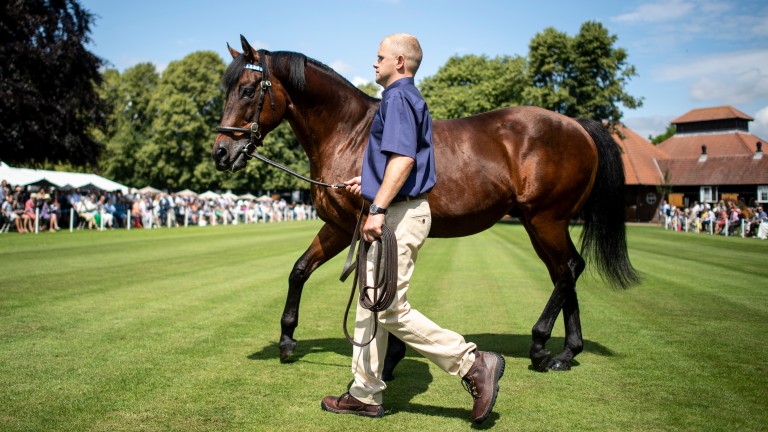 Dubawi: Dalham Hall Stud kingpin covered 31 Galileo mares among a book of 155 in 2020
Edward Whitaker
The Dubawi over Galileo cross has already produced high-class talents such as Ghaiyyath and Night Of Thunder, and Maria Danilova is one of 31 daughters of the perennial champion sire in Dubawi's latest book. That number includes some celebrity members of Coolmore's broodmare band, including Group 1 winners Forever Together, Found, Hydrangea, Minding and Rhododendron.

Busiest sires in Britain and Ireland in 2020

Stallion No. of mares covered