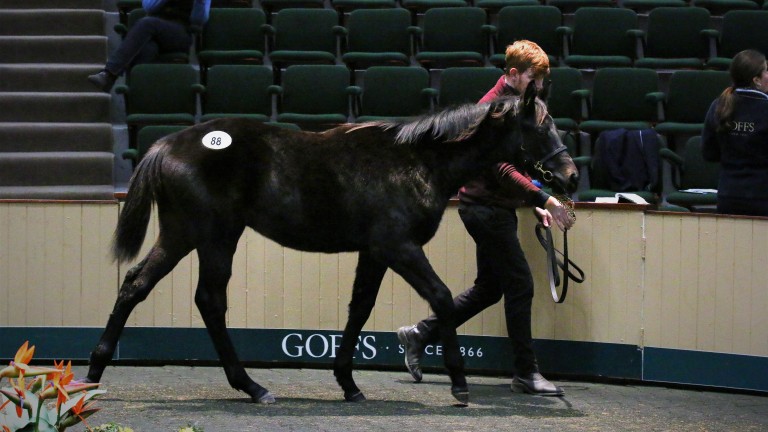 Ireland's biggest Flat foal auction kicked off at Goffs on Monday, with a solid November Sale opener topped by a colt from the debut crop of Caravaggio, who went the way of Peter Doyle at €100,000.

The April-born colt, the sole offering by his sire on day one, was consigned by Alexandra Whitehead's Altenbach Bloodstock and is the fifth foal out of the winning Cape Cross mare Cape Joy, making the youngster a half-brother to the useful Motajaasid.

"He's a very nice colt," said Doyle, who added that his purchase had been bought for resale next year. "I'm looking forward to getting a few more of these Caravaggios as he seems to be getting some really nice types. This is a very nice individual and he had a great walk to go with it. Hopefully he'll turn into a nice yearling next year."

The colt is one of 139 foals from the debut crop of Caravaggio, the son of Scat Daddy who landed the Phoenix Stakes at two before he claimed the following year's Commonwealth Cup for Aidan O'Brien and the Coolmore partners.

The colt's popularity in the ring had been mirrored during pre-sale inspections, as Whitehead said: "It's a great result, we're delighted with that price. He's the busiest foal I've ever consigned to the sales but he took it all like a star. 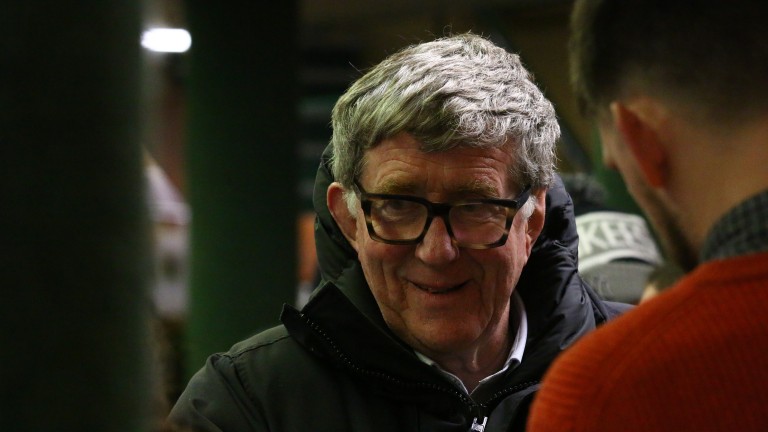 Peter Doyle: "I'm looking forward to getting a few more of these Caravaggios"
Peter Mooney
"He's a homebred and the mare has been very lucky as she breeds a very nice type of horse. Caravaggio is a very exciting young stallion so we're lucky to have brought a nice package here today."

She added: "The mare is in foal to Camacho. We haven't decided where she'll go next year but we were thinking about Shalaa."

Pinhookers dominated the upper echelons of trade, with the session's second-most expensive lot, a colt by Starspangledbanner bought by Lynn Lodge Stud for €88,000, also due to reappear at next year's yearling sales.

"He's a very nice colt - I waited all day for him and he'll be back for resale next year," said the operation's Eddie O'Leary.

The colt is the first foal out of Rely On Me, a daughter of Kyllachy who won a pair of six-furlong contests while in training with Andrew Balding.

The third-top lot took her turn in the ring when Jamie Railton and Joseph O'Brien clashed over the Camelot filly out of Lucht Na Gaeilge offered by Ballintry Stud, and it was Railton who emerged victorious after a bid of €72,000.

"Joseph was underbidder and I think he knows more about Camelot than I do!" quipped Railton in reference to O'Brien's time in the saddle, which included guiding Camelot to victory in four Group 1s, most notably the Derby.

Railton continued: "She'll be coming back for the Orby next year so hopefully Joseph will be there then too. She's an exceptional mover. We were underbidder on the Caravaggio but it's great to have secured her."

Bred by Noreen Maher, the filly is the second foal out of her unraced dam, a Teofilo half-sister to the dam of the Group 1-placed Leitir Mor and from the family of Australian champion Serenade Rose and Comic Strip, a top-level winner in Hong Kong.

Another first-crop sire to receive a big vote of confidence from buyers was Elwick Stud's Mondialiste, with his two representatives bringing an aggregate of €75,000 and an average of €37,500 for foals bred at a fee of just £6,000.

The pricier of the pair was signed for by Mags O'Toole, who went to €50,000 for the colt offered by Railstown Stud. The February foal was bred by Elwick Stud and is the first produce of Moghrama, a Harbour Watch half-sister to the Group 2-winning Mythical Magic and the Nell Gwyn Stakes scorer Esentepe.

"He's a lovely colt," said O'Toole. "He's got a nice pedigree and is a great mover. I have somebody for him, although I'm not sure whether the plan will be to keep him to race or re-offer him next year. I thought he was a great advertisement for Mondialiste's progeny."

The other Mondialiste, a colt out of Just Jealous offered by Olive O'Connor Bloodstock, was knocked down to Philipp Stauffenberg at €25,000.

O'Toole added: "There are only two of them here today but I liked both and a very good judge in Philipp Stauffenberg bought the other. They both made good money, and I'm not surprised as everything I've seen by him so far I've loved."

The November Foal Sale continues on Tuesday, with the session starting at 10am.

Master Dino makes €420,000 as Autumn Sale gets off to flying start

FIRST PUBLISHED 7:51PM, NOV 18 2019
Joseph was underbidder and I think he knows more about Camelot than I do!