Fergie time! The 310,000gns sale-topper set for debut over hurdles at Newbury 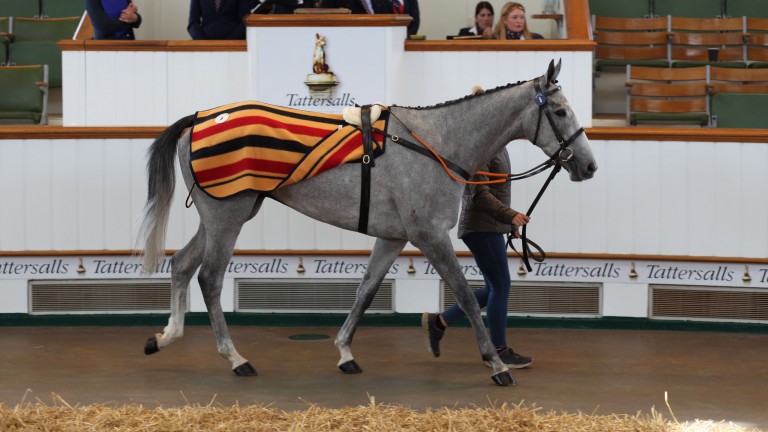 Ittack Blue, an easy winner of his sole point-to-point start and a 310,000gns session-topper at the Tattersalls May National Hunt Sale, will make his hurdling debut for the Dan Skelton yard at Newbury on Friday.

The son of Coastal Path initially sold from Clifton Farm to Ballycrystal Stables for €30,000 at the Tattersalls Ireland May Sale last year, before his bloodless romp at Punchestown in May for Matthew Flynn O'Connor.

A 16-length winner on that occasion, the grey then made 310,000gns at Park Paddocks when selling to Ryan Mahon from Ballycrystal Stables. The four-year-old now sports the colours of Sir Alex Ferguson, Ged Mason, John Hales and John Diver.

Speaking to the media at Tattersalls after signing the docket, Mahon said: “He’s a lovely horse and looks to have an enormous engine. He’s been bought for an existing client of Dan Skelton’s. He was seriously impressive in his point and the vibes were very good so he came highly recommended.”

Ittack Blue is the third foal out of the unraced Agent Bleu mare Beauty Blue, a full-sister to Listed-placed winning hurdler and chaser Quitto Bleu and Space Bleu. The trio are in turn out of an unraced Dom Alco half-sister to Listed chase winner Ommega.

Paul Nicholls and Chris Giles combine for another interesting newcomer in Stay Away Fay in the Coral Get Closer To The Action Novices' Hurdle (1.20).

Bred by Southeast Bloodstock Ltd and Owen Hickey, the son of Shantou was a £305,000 purchase by Tom Malone and Nicholls from Ballycrystal Stables at the Tattersalls Cheltenham December Sale almost a year ago.

A half-brother to bumper winner Queens Highway, he is out of an Oscar half-sister to four winners including black-type performers Generous Ransom and Little River Bay.

FIRST PUBLISHED 11:26AM, NOV 24 2022
He was seriously impressive in his point and the vibes were very good so he came highly recommended