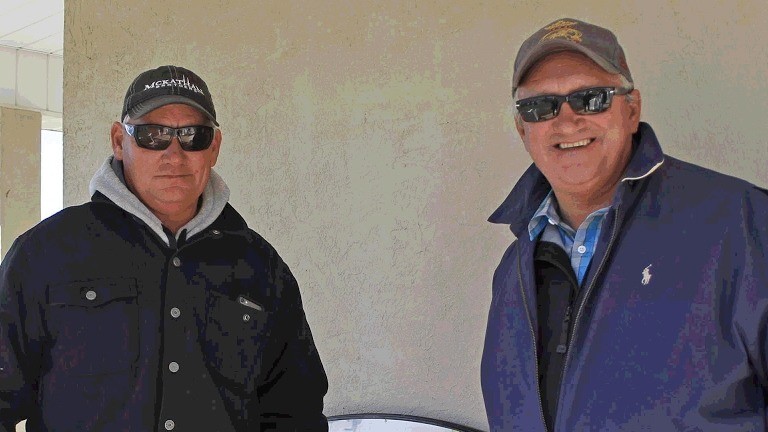 JB McKathan (right) with brother Kevin at their training facility in Florida
1 of 1
By Ron MItchell/Bloodhorse UPDATED 5:22PM, FEB 4 2019

JB McKathan, a member of an iconic Florida horse racing family who developed many top-level runners including American Pharoah, died on Saturday at the age of 53. The day also marked the anniversary of the Triple Crown winner's birth.

McKathan, along with his brother Kevin, established a 200-acre training centre near Ocala in 1988 and since that time have become major consignors at the two-year-olds in training sales, renowned for their expertise in prepping young horses to race.

In addition to American Pharoah, other prominent horses that trace their foundation to the McKathan team include Classic winners Silver Charm and Real Quiet, and two-time champion filly Silverbulletday, all of whom - like American Pharoah - were trained by Hall of Famer Bob Baffert.

Baffert fondly recalled his relationship with the McKathans, which began early in his transition from the quarter horse world to Thoroughbreds and extended beyond business.

"JB had a great eye for horses and was a really astute horseman," Baffert said. "JB and Kevin became good friends of mine when I first got in the thoroughbred business. They played a big part in selecting horses at the sales and breaking and training the babies at the farm.

"We had a lot of fun and great success in those early days with horses like Silver Charm, Real Quiet, and Silverbulletday. My heart goes out to his wife, Leigh, and his family, especially Kevin. They were a great team, like 1 and 1A."

Baffert recalled a phone call he received from JB when the McKathans were breaking American Pharoah to start his career on behalf of Zayat Stables.

"He called me and said 'You need to get this horse to your barn because he is too fast for my track'," Baffert said.

Ahmed Zayat of Zayat Stables also expressed his condolences on social media stating, "We are shocked [and] devastated to hear of the untimely passing of JB McKathan. JB was a great friend and integral part of Zayat Stables' success over the years.

"A great and talented horseman. Our thoughts and prayers are with Leigh, Kevin, Chris, and [the] entire McKathan family. RIP"

Among the McKathans' top sales graduates in recent years was Acapulco, a filly from the first crop of Scat Daddy, who was initially bought by the brothers' clients Scott and Evan Dilworth for $180,000 as a yearling.

Sent through the ring at the 2015 Ocala Breeders' Sales March two-year-olds in training sale as part of the McKathan Bros consignment, the filly zipped a furlong in 9.6 seconds and was then purchased by Coolmore Stud interests for $750,000.

Scott Dilworth credited his operation's success over the last 13 years to his association with the McKathans, to whom he was introduced by Baffert.

"The last 13 years with the McKathans have been the best years of my life," Dilworth said. "I will always be grateful to Baffert for putting us together. There are a lot of great horsemen in the world but there is no one that could spot the little things good or bad like JB could. He saved me many a time from getting run over by a train.

"His favourite place in the world was to be at the viewing stand at their farm watching horses develop," Dilworth said. "There was a certain peace about it."

FIRST PUBLISHED 2:33PM, FEB 4 2019
JB had a great eye for horses and was a really astute horseman