Eqtidaar introduced at £6,500 as Shadwell announce next year's roster 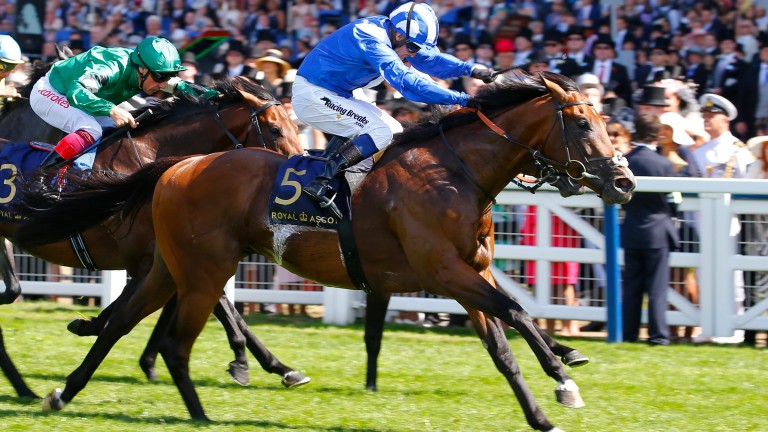 Shadwell will introduce last year's Commonwealth Cup winner Eqtidaar to breeders at a fee of £6,500 for the 2020 season.

The son of Invincible Spirit was trained by Sir Michael Stoute and was also successful on debut at two. He is a half-brother to Group 2 Hungerford Stakes winner and Classic runner-up Massaat out of a winning Acclamation mare from the family of Group 1 horses Previeuse and Scottish.

Four-time Group 1-winning sprinter Muhaarar will be standing at £20,000 next year. In his first season, the stallion has posted a double-figure tally of juvenile winners including Group-placed Unforgetable.

Shamardal's Group 1-winning son Mukhadram is also in the early stages of his stud career with his first two crops of racing age yielding four stakes horses, headed by US Grade 3 scorer A Bit Special and this year’s Listed-winning two-year-old Romsey. He stands at the unchanged fee of £6,000 in 2020.

The nomination fee for Tasleet, who was well supported by breeders during his first season in 2019 and covered more than 100 mares, remains similarly unchanged at £6,000.

Richard Lancaster, Shadwell Stud director, said: "We’re delighted to be standing Eqtidaar at Nunnery Stud in 2020 and we feel he possesses everything that commercial breeders are looking for: he’s a Group 1-winning sprinter - who won at two - by one of the hottest sires around in Invincible Spirit.

"He also has the pedigree and looks to match his racecourse achievements and at £6,500 represents outstanding value.

"Muhaarar has made a pleasing start with his first two-year-olds and we go into the winter months expecting them to develop into even better three-year-olds, as was the case with him.

"The appetite for his stock has remained high, a point emphasised by his yearling prices and he covered a full book of high-class mares for the fourth consecutive season in 2019."

He continued: "Mukhadram offers breeders a great opportunity to tap into the Shamardal sire-line at an affordable price. His three-year-olds have operated at a clip of nearly 50 per cent this year and he has produced another stakes-winning two-year-old in Romsey, plus Royal Ascot scorer Thanks Be.

"Tasleet was well supported during his first season at stud and he holds plenty of appeal as a Group-winning sprinter by a leading sire from the family of Battaash."

FIRST PUBLISHED 7:00PM, NOV 1 2019
We're delighted to be standing Eqtidaar at Nunnery Stud in 2020 and we feel he possesses everything that commercial breeders are looking for

Comment: cutbacks within global operation unwelcome - but not unexpected