The headcollar has been signed by John Gosden and Frankie Dettori 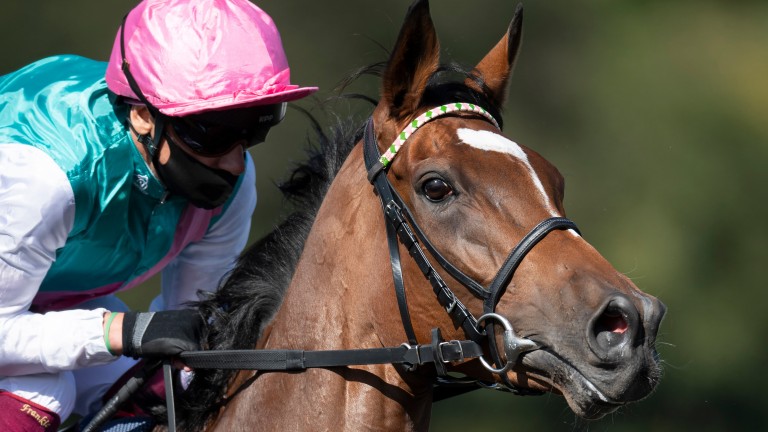 Enable: the Juddmonte great's headcollar is up for auction
Edward Whitaker (racingpost.com/photos)
1 of 1
By Kitty Trice UPDATED 5:40PM, NOV 25 2020

Khalid Abdullah's homebred, who was retired after attempting a record-breaking third Arc success last month, won the hearts of fans worldwide with her stunning exploits, and her headcollar will hopefully prove appealing at the ten-day auction, which begins on Friday.

Newmarket-based Juddmonte has been a long-time supporter of EACH, and in 2014 their champion racehorse and leading sire Frankel was awarded the accolade of ambassador in recognition of the funds and awareness he had generated for the charity.

The auction also includes memorabilia from celebrities such as Cate Blanchett, Ralph Fiennes and Dame Judi Dench, with proceeds going to a charity which cares for children and young people with life-threatening conditions across Cambridgeshire, Essex, Norfolk and Suffolk.

Mementos from world famous series and films such as Downton Abbey, Game of Thrones, James Bond and Pirates of the Caribbean will also be up for grabs.

The auction can be found at celebritybottomdrawer.com and money raised will provide vital support for EACH in what has been a particularly challenging year.

FIRST PUBLISHED 12:51PM, NOV 25 2020
In 2014 champion racehorse and leading sire Frankel was awarded the accolade of ambassador in recognition of the funds and awareness he had gene