The son of Redoute's Choice was a $1.4 million Magic Millions yearling purchase 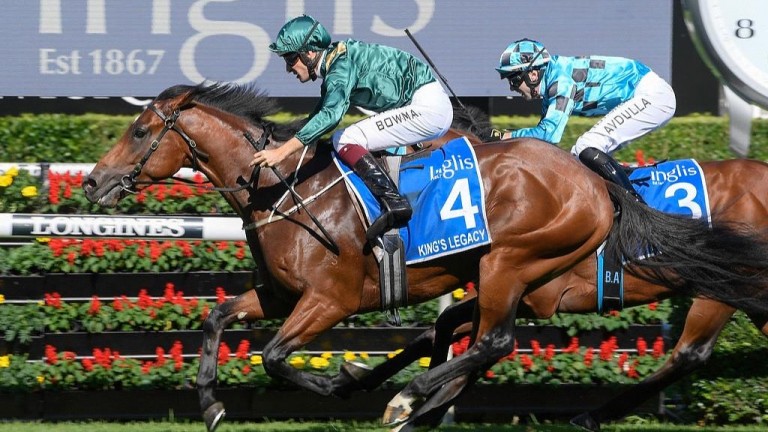 Dual Group 1-winning two-year-old King’s Legacy, a son of breed-shaping stallion and sire of sires Redoute’s Choice, has been retired to stand at Coolmore later this year.

The Peter and Paul Snowden-trained colt ran a creditable fifth in Saturday’s Randwick Guineas, but connections have elected to call time on the valuable three-year-old’s racing career.

“It was a great effort by King’s Legacy on Saturday and jockey Tom Marquand reported that had he not been held up at a crucial stage in the straight he could have made things very interesting,” Harron said on Tuesday.

“King’s Legacy has been a tremendous horse for us and we could not be more excited looking forward to his future at Coolmore.

“Some of Australia’s biggest breeders are involved with this colt and he will be strongly supported with outstanding mares throughout his stud career."

The three-time winner is out of the stakes-placed mare Breakfast In Bed, making him a three-quarter brother to the now pensioned Arrowfield sire Not A Single Doubt.

“King’s Legacy is aptly named and is everything Australia is looking for in a young stallion prospect. He won the Sires’ Produce and then, after we joined the ownership, he added the Champagne Stakes at Royal Randwick,” Coolmore Australia principal Tom Magnier said.

“We’re delighted he will now take his place on our roster. He’s by an outstanding sire of sires and has an exceptional pedigree and an imposing physique.

“He will be heavily supported by both Coolmore and some of Australia’s leading breeders who remain in the ownership."

A stud fee for King’s Legacy will be announced at a later date.

FIRST PUBLISHED 5:27PM, MAR 9 2021
He will be heavily supported by both Coolmore and some of Australia’s leading breeders who remain in the ownership