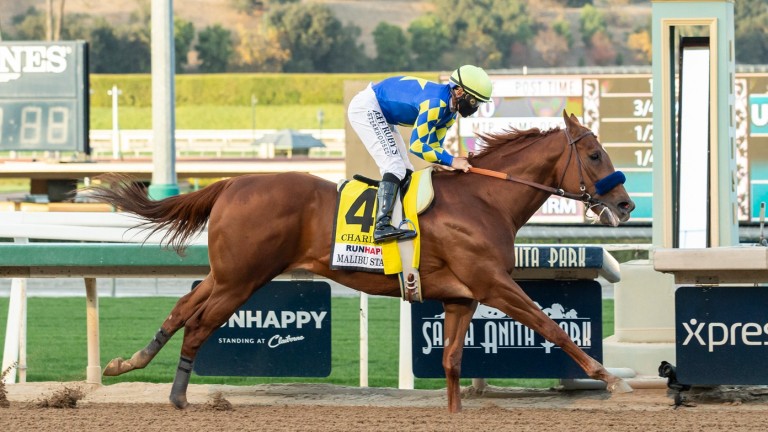 Charlatan and jockey Mike Smith win the Malibu Stakes
Benoit Photography
1 of 1
By Eric Mitchell of Bloodhorse 10:21AM, JUN 25 2021

Hill 'n' Dale Farms at Xalapa has announced the retirement of dual Grade 1 winner Charlatan, who will take up stud duty at the farm's newly restored stallion complex near Paris in Kentucky.

Bred by Stonestreet Thoroughbred Holdings, the imposing son of Speightstown is out of the multiple Grade 1-placed, Grade 2 winner Authenticity.

Stonestreet sold him as yearling during the 2018 Keeneland September Yearling Sale through the Denali Stud consignment for $700,000, making him his sire's second-highest-priced sales yearling that year.

Charlatan broke his maiden at first asking in February of his sophomore year, winning a six-furlong maiden special weight at Santa Anita Park by nearly six lengths. His brilliance continued in his next start in which he won a mile allowance optional claimer by just over ten lengths.

He jumped into Grade 1 company in the Arkansas Derby, where he wired a division of the important Kentucky Derby prep race by six lengths. Charlatan's Arkansas Derby win was initially disqualified following a positive test for lidocaine, but the Arkansas Racing Commission restored the win following testimony that led credence to possible contamination from a pain-patch worn by an assistant trainer and questions raised about the chain of custody for the post-race samples taken.

Charlatan would validate his Grade 1 status later in the seven-furlong Runhappy Malibu Stakes, which he won by a widening four and a half lengths. He made one start at four in the $20 million Saudi Cup where he ran a gallant second to Mishriff. Charlatan retires with a bankroll of $4,047,200.

"He's one of the most talented horses I have seen run who combines world-class sprinter/miler speed with the ability to carry it around two turns. He's a striking individual who should impart size, substance, balance and brilliance to his foals.

"It is an honour to have Charlatan set the standard of excellence as the first stallion whose career we launch here at Hill 'n' Dale at Xalapa."

"We're very proud of everything Charlatan accomplished in his brief but brilliant career. He's one of the most perfect physical specimens to come to stud in recent times, and there's no doubt he will be supported accordingly," Tom Ryan, managing partner for the ownership group, added.

Charlatan hails from a family steeped in black type. Bred in Kentucky by Dixiana Stables, his dam Authenticity won or placed in seven Graded stakes that included victories in the La Troienne Stakes at Churchill Downs and the Shuvee Handicap at Saratoga.

The daughter of prominent broodmare sire Quiet American would also finish runner-up in the Ogden Phipps Handicap, Personal Ensign Handicap, and Zenyatta Stakes. She was also third in the Breeders' Cup Distaff.

Stonestreet acquired Authenticity as a broodmare prospect for $1.2 million in 2013 at Fasig-Tipton's The November Sale. She has produced two stakes winners from three to race, with Hanalei Moon being her other stakes winner.

"Physically he's one of the best physical horses we've ever bred," said Stonestreet Farm bloodstock adviser John Moynihan. "What sets him apart is the way he moves. He moves like a great horse. He is just a real athlete.

"He is the epitome of what we've tried to breed up to this point. Charlatan is a perfect combination of the genes meeting the physical. He is an absolute standout."

A stud fee will be announced at a later time.

FIRST PUBLISHED 10:21AM, JUN 25 2021
He is a striking individual who should impart size, substance, balance and brilliance to his foals