Down but not out: vendors pragmatic as Premier Sale turnover drops 38 per cent 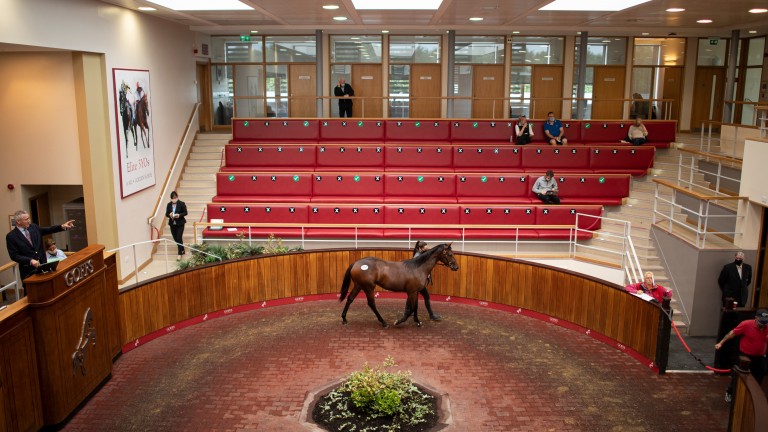 While those figures undoubtedly make for sobering reading, the overriding sense on the sales ground was not one of despair but of relief.

In the circumstances, plenty of vendors seemed thankful just to be leaving Doncaster with empty head collars, and that the sale achieved a clearance rate of 84 per cent, with 338 of 403 offered lots selling, is no mean feat given the challenges at hand.

Plenty of those buying and selling were quick to point out that it should not be taken for granted that yearling sales are taking place at all, particularly given the restrictions and protocols now in place in so many areas of everyday life.

While year-on-year declines seemed inevitable given the wider economy is staring down the barrel of a major recession, with the British economy having contracted by more than 20 per cent between April and June, the sale also suffered on account of some notable absentees.

Chief among those was Shadwell, who have been the Premier Sale's leading buyer for the last five renewals, in which time Hamdan Al Maktoum's operation have spent £9,540,000 on 86 yearlings, a figure that represents 10.3 per cent of the last five years' turnover.

Some prominent vendors were missing too, including the likes of Newsells Park Stud and Ballyphilip Stud, whose sought after offerings have contributed significant sums to the sales figures in recent times. 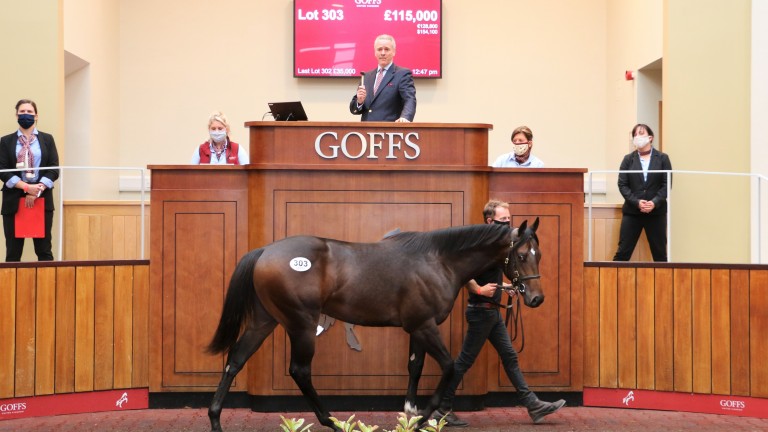 Lot 303: the Havana Gold colt bought by Oliver St Lawrence for £115,000
Claudia Claydon
In his end-of-sale statement, Goffs UK's managing director Tim Kent summed up the mood of many industry participants, saying: "Today concludes what has been one of the most anticipated Premier Yearling Sales in recent years, but not in the way that we normally prepare for a sale, and we share everyone’s collective relief that we have been able to conduct the sale and provide an opening to Europe's yearling sales circuit during these difficult times.

"There is no doubting that trade across the last few days has not been straightforward, but the important thing is that horses are getting sold and the collective view from vendors and purchasers has been that this was a 'good' sale, even though 'good' may currently be difficult to quantify.

"We obviously missed some key faces who were active last year but there were a significant number of success stories over the last two days, including some spectacular pinhooks, and we must remember these moments as we reflect on what has been achieved."

The first of three six-figure lots during Wednesday's session came when Oliver St Lawrence went to £115,000 for the Havana Gold colt out of the Listed-placed Majestic Alexander offered by Mountarmstrong Stud.

The March foal is a sibling to three winners, including the Listed-placed Mighty Spirit and the Group 3-placed Angel Alexander, while the dam is a half-sister to Cornwallis Stakes winner Majestic Missile. 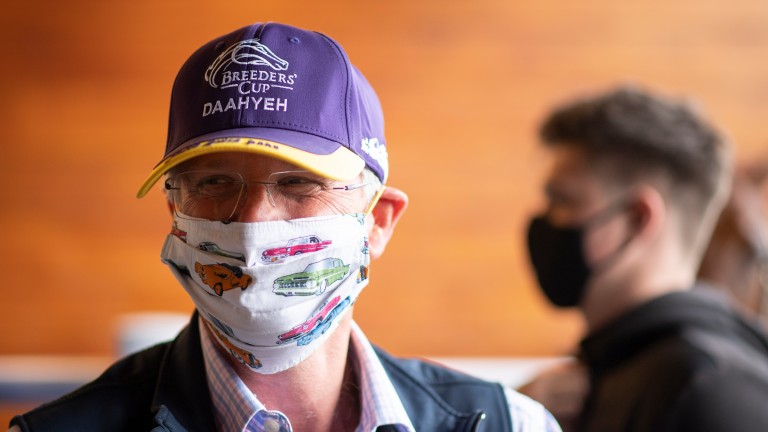 Oliver St Lawrence signed for the £115,000 session topper
Edward Whitaker
"He's a horse we hadn't actually intended to buy," said St Lawrence. "I'd seen him and I'd shown him to Fawzi Nass yesterday and we liked him but didn't have him vetted at that stage. However, one of the trainers put him up to us as one that he liked so we ended up following him through.

"He looks like a real two-year-old and, of course, we're all looking for those Royal Ascot juvenile types. He's a really sharp, strong colt. He comes from a very good breeder in Noel O'Callaghan of Mountarmstrong Stud. Hopefully he can bring us some luck."

The Middleham Park Racing team stuck around until the closing stages and secured the day's second-most expensive offering when going to £110,000 for the Showcasing filly offered by WH Bloodstock five lots from the close of trade. The filly is a half-sister to the smart Il Primo Sole.

"She was our nap of the sale," said Middleham Park's Mike Prince. "Showcasing has had another great year and the mare has already produced a good runner by Raven's Pass and she's just a lovely, racy filly.

"She'll go into training with Mark Johnston, who we've obviously had a lot of success with thanks to Marie's Diamond. Hopefully she can follow in his footsteps. It's on to Tattersalls Ascot now."

The filly, a €58,000 pinhook through Peter and Ross Doyle, was one of four lots sold by the WH Bloodstock team across the two days, with the quartet realising a total of £169,000.

The operation's Mimi Wadham said: "We're thrilled with that result. We were quietly optimistic without feeling confident because we've had a tricky few days, but she has a lot of class and looks like a sharp two-year-old."

Reflecting on the state of trade at the Premier Sale, Wadham added: "It's no secret that it's been tricky. We've made losses on some of our pinhooks but we're happy that we've banked some profit with this filly and it's nice to leave on a good note.

"The word before the sale was that it might be down by around 30 per cent and that's how it turned out, so it's what we expected really. We were all hoping it might be stronger but, at the same time, nice horses are still making money; it's just the middle market that's patchy."

Yafta brother worth the wait

The very last lot into the ring brought the day's third six-figure sum when Ed Sackville, standing by the shoot with Michael Owen, saw off Bobby O'Ryan and Mark Johnston to secure the brother to Yafta at £100,000.

Bred by Lordship Stud and offered by Highclere, the colt is not only a Dark Angel brother to Hackwood Stakes winner Yafta but is out of Swiss Dream, a Listed-winning daughter of the remarkable producer Swiss Lake, whose 12 winners include Swiss Spirit and Swiss Diva.

"I'm delighted for Trevor and Tom Harris of Lordship Stud," said Highclere's Carolyn Warren. "He's a lovely colt; very light on his feet and with lovely movement. And it's a nice story as Michael Owen was the underbidder on Yafta so I really hope that for him, Tom Dascombe and Ed Sackville he's just as successful, if not more so than his full-brother!" 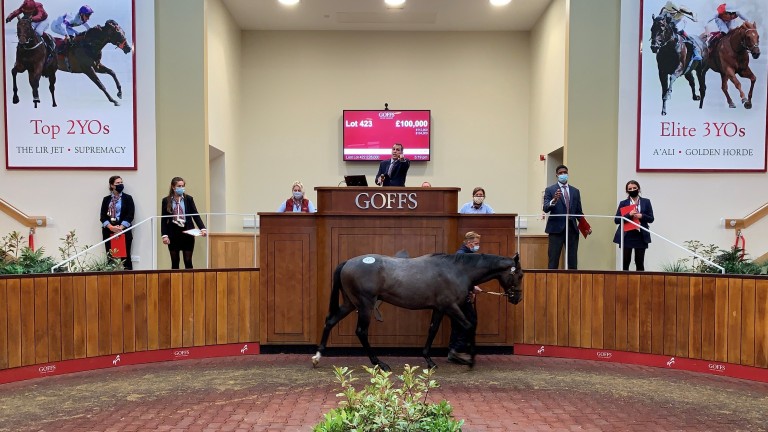 Lot 423: the brother to Yafta sells to Ed Sackville for £100,000
Claudia Claydon
Yafta himself was a Premier Sale graduate, having topped the 2016 edition when bought by Shadwell for £280,000. Highclere sold eight lots across the two days for receipts totalling £232,000.

Reflecting on the opening leg of the European yearling sales circuit, Warren said: "It's been a tough sale and we're in very different times but I think we've got to be pleased that we're able to sell horses at all.

"I do think there's been solid trade for nice horses and people have still been buying, we just have to readjust our sights so far as prices are concerned. There are also opportunities there now that might not have been there before. There are still some lovely horses to be bought and people might just be able to get better value now than they have for a number of years."

Breeze-up boys out in force

Despite the dip in the Premier Sale market, plenty of pinhookers were content to roll the dice again and reinvest in breeze-up prospects in the hope of hitting the bullseye at next year's two-year-old sales.

One of the session's talking horses was the Night Of Thunder colt out of Pearl Spirit offered by Broughton Bloodstock, and the solidly built bay was duly knocked down to Mick Murphy of Longways Stables for £95,000.

"He's going to go breezing," said Murphy. "For me, he was the nicest horse in the sale. To be honest, I didn't think I'd get him as I expected him to make a nice bit more than that."

The March-born colt certainly has the pedigree to make a high-class breeze-up prospect, as his dam is an Invincible Spirit sister to Fleeting Spirit, who graduated from the Craven Sale before winning the 2010 July Cup for Jeremy Noseda.

"He's by a sire that's very much in demand and has a very good pedigree too, I just hope he's fast," continued Murphy. "I thought he was exceptionally correct for a Night Of Thunder."

When asked if the state of trade tempered enthusiasm to invest in pinhooks to sell at next year's breeze-up sales, Murphy said: "The market is a lot more select but the ones you want are still making plenty of money.

"We're definitely going to buy fewer horses to go breezing but we'll keep buying ones like him, if at all possible. The top end looks after itself as there's always somebody to buy a nice horse."

Longways Stables signed for six lots across the two Premier Sale sessions for a combined outlay of £228,000.

Arguably no breeze-up consignor has enjoyed the year that Robson Aguiar has, with a string of cheaply sourced yearlings having turned into well above-average talents on the track.

The roll of honour could grow further when eyecatching Yarmouth scorer Alicestar lines up in the Shadwell Dick Poole Fillies' Stakes at Salisbury on Thursday.

Aguiar has made his name with modestly bought yearlings but on Wednesday he upped his spending markedly when going to £92,000 for a colt from the debut crop of Ulysses offered by Bumble Mitchell.

Aguiar said: "He's a nice horse; he's scopey and probably one for later on over seven furlongs. We'll give him a bit of time but he'll probably go breezing."

The February foal was bred by Cheveley Park Stud and is out of Interlace, a daughter of Pivotal who has produced a perfect five winners from five runners. In turn, Interlace is a sister to the Listed-winning sprinter Feet So Fast.

Aguiar Bloodstock signed for a further six lots, including a £58,000 Cotai Glory colt from Tally-Ho Stud, for a total outlay of £261,000.

Expanding on his increased spending power, Aguiar said: "I have some people investing and they've put money in to buy some breezers. They own half of him with me and we'll try to sell him next year. I've had success but I have to improve the quality of horses I buy to keep that success going."

On the strength of trade, Aguiar added: "For nice horses, the market isn't down, they keep selling well. I've tried hard to buy a few others but couldn't get them."

Yorton provides jumping and conformation footage ahead of second sale

FIRST PUBLISHED 10:08PM, SEP 5 2020
There is no doubting that trade across the last few days has not been straightforward, but the important thing is that horses are getting sold