Son of Dream Ahead signed off with British Champions Sprint victory 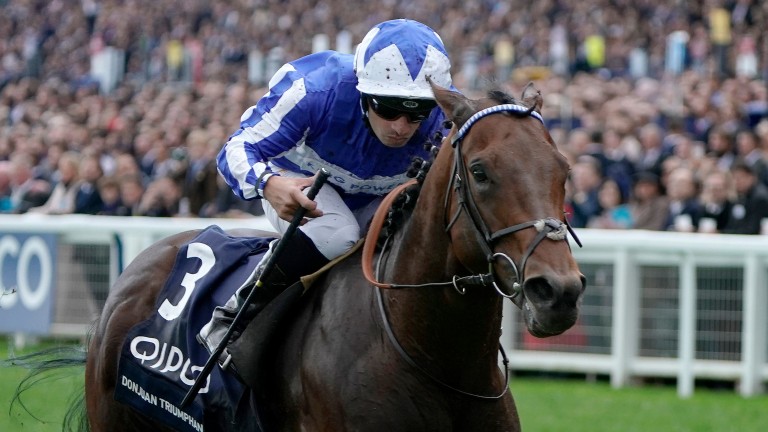 Donjuan Triumphant has been retired and sold to stand at Haras de la Barbottiere in the Pays de la Loire region of France, in a deal brokered by Richard Venn.

The six-year-old son of Dream Ahead signed off his career by defeating One Master to land the Qipco British Champions Sprint Stakes at Ascot this month – a richly deserved first Group 1 success on his 37th start.

Originally campaigned by Richard Fahey and Middleham Park Racing, he won the Rockingham Stakes and Criterium de Maisons-Laffitte at two and finished second in the Sandy Lane Stakes and Prix Maurice de Gheest at three, after which he became the first horse bought by the late Leciester City chairman Vichai Srivaddhanaprabha and was sent to Andrew Balding.

Carrying the colours or Srivaddhanaprabha's King Power Racing, he won a conditions race and valuable handicap at Haydock at four and took the Wentworth Stakes and finished third in the British Champions Sprint last year at five.

“Donjuan Triumphant was an absolute pleasure to train,” said Balding. “He was tough, sound and very talented.

“I think he offers breeders the qualities they look for in a stallion; we will definitely be supporting him with mares, as will King Power.”

Donjuan Triumphant's retirement to stud comes as Dream Ahead has hit a rich vein of form with one daughter, Glass Slippers, having won the Prix de l'Abbaye this month and another, Forever In Dreams, finishing third in the British Champions Sprint.

Bred by Patrick Cosgrove and the Dream Ahead Syndicate, he is out of the winning Tagula mare Mathuna, making him a half-brother to Listed scorer Caledonian Spring.

Donjuan Triumphant will stand at Barbottiere alongside German Derby winner Nicaron, who covered 130 mares this year, and Chanducoq, a Voix Du Nord half-brother to the popular Cokoriko.

How all the big winners on British Champions Day were bred

FIRST PUBLISHED 4:11PM, OCT 26 2019
I think he offers breeders the qualities they look for in a stallion; we will definitely be supporting him with mares, as will King Power