Stallion had produced useful progeny including Sayif and Penny's Picnic 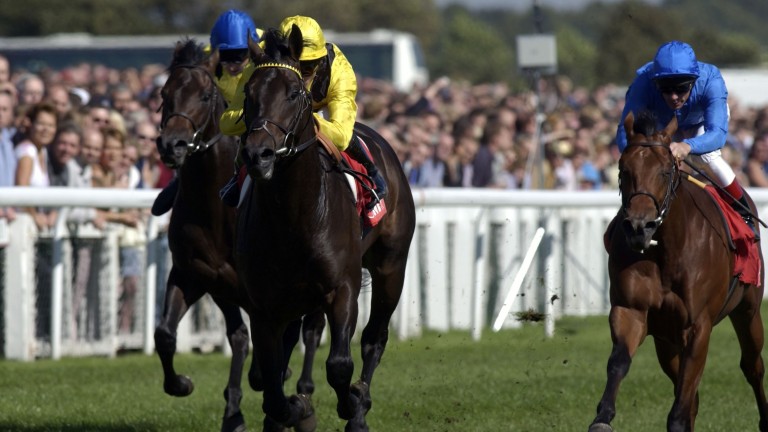 Kheleyf, the winner of the 2004 Jersey Stakes and sire of a handful of Group winners from stints around Europe, has died at the age of 20.

The son of Green Desert had been most recently standing at Haras des Faunes near Bordeaux, whose supremo Alain Chopard confirmed the news with French media outlet Jour de Galop.

Bred by Darley and first seen with Sheikh Ahmed Al Maktoum and two-year-old maestro David Loder, Kheleyf was out of the Mr Prospector mare Society Lady.

His sister Bint Allayl was an exceptional juvenile for Mick Channon, winning both the Queen Mary Stakes and the Lowther in her sole season on the track. Society Lady also produced Laa Rayb, a very fine miler for Mark Johnston.

Kheleyf himself was second in the Norfolk at Royal Ascot and landed a conditions event at Doncaster in Loder's care before being switched to Saeed bin Suroor, for whom he was also placed in the Lennox Stakes at Goodwood.

He was to begin life as a stallion at Kildangan Stud, serving six seasons in Ireland before four more at Dalham Hall, also shuttling to Australia before moving to Haras des Faunes for the 2015 season.

Kheleyf has had some decent-sized crops through the years and has already fielded more than 900 runners on the track and 566 worldwide winners to date.

His best on ratings, and among two Group 2 winners so far, has been Sayif. Runner-up in the Middle Park and later successful in the Diadem Stakes at Ascot, Sayif went on to a career as a stallion himself, with his best runner being the classy sprint handicapper Gulliver.

Kheleyf's other progeny of note include Haras du Hoguenet resident Penny's Picnic, who took three black type races in France as a two-year-old, and the elite Italian sprinters Trust You and Plusquemavie.

He arguably made his greatest impact as a broodmare sire, with his daughters responsible for producing top-class juvenile filly Tiggy Wiggy, who is by Kodiac, and Intello's Prix Jean Prat-winning son Intellogent.

Most recently standing for a fee of €1,800, Kheleyf recently clinched his 22nd stakes winner when consistent filly Keyflower took the Prix Occitanie in early September.

FIRST PUBLISHED 12:10PM, SEP 28 2021
Kheleyf has had some decent-sized crops through the year and has already fielded more than 900 runners on the track and 566 worldwide winners to date